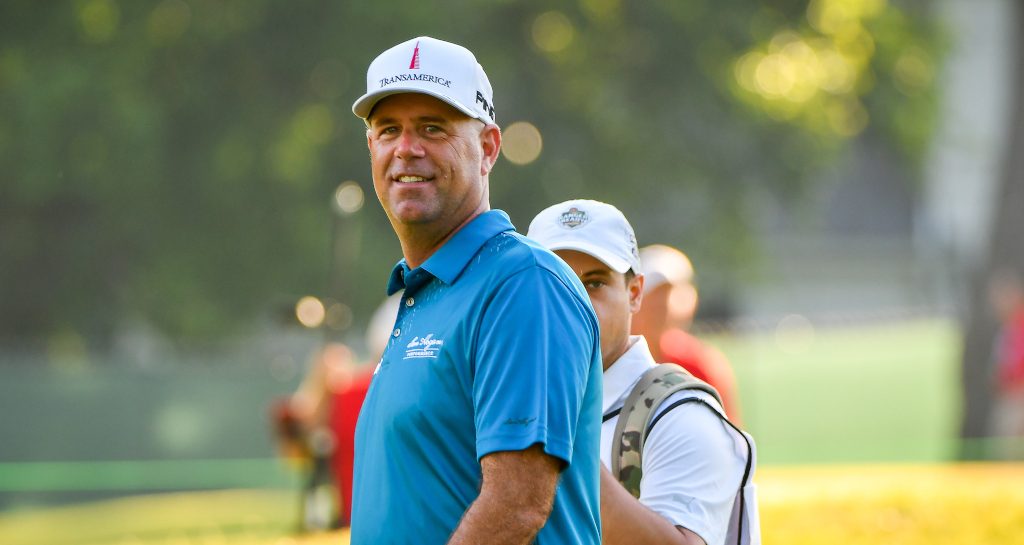 Safeway Open champion Stewart Cink admitted he had a moment on the course on Sunday when he felt overwhelmed with gratitude.

The 47-year-old put together a stellar final round 65 in California to clinch his first victory since the 2009 Open Championship.

It’s a moment he admits he thought might never come again, and what made it even better was that he had his family with him every step of the way.

“When you get to 47 like I am, you just don’t really know if you’re ever going to be able to close the door on another one,” Cink said.

“I’ve been at times in a position to get it done, and haven’t, and this was just a really special week where I had a lot of good things going with my golf.

“Last week, we went into a deep-dive equipment-wise and really made some good changes – it’s been a while since we did that – and we really got efficient.”

Things were clicking into place, and Cink, who had his 23-year-old son Reagan caddying for him throughout the week, said the youngster gave him some great advice at the start of the day.

“Reagan, my son here, walking out to number two today, he said, ‘Dad, your tangibles are really, really good right now – the set of clubs, the ball – you just take care of the intangibles today.’

“That’s great advice for a kid only caddying in his fourth PGA Tour event.”

Asked what it was like having his son carrying his bag, Cink said with a smile: “It’s been a blast. All week, and the other three times he’s caddied for me, it’s been a great time.

“He knows the game in and out and did a great job keeping me positive and keeping me loose out there.”

At the 14th hole, Cink went over to his wife, Lisa, and whispered something in her ear before going on to close out the two-shot win.

Asked what he had told her, Cink said he was feeling immense gratitude for the position he was in and went over to share that with her.

Lisa was diagnosed with breast cancer in 2016 but has since gone into sustained remission.

“I don’t know, I just felt a lot of gratitude in my heart,” Cink said, tearing up.

“Thinking about my age and being in this position, having Reagan on the bag… I just went over to her and leaned in said, ‘You know, we’ve got a lot to be thankful for.’

“It just kind of overcame me for a second there.”