Wang surges into Nedbank lead with 64 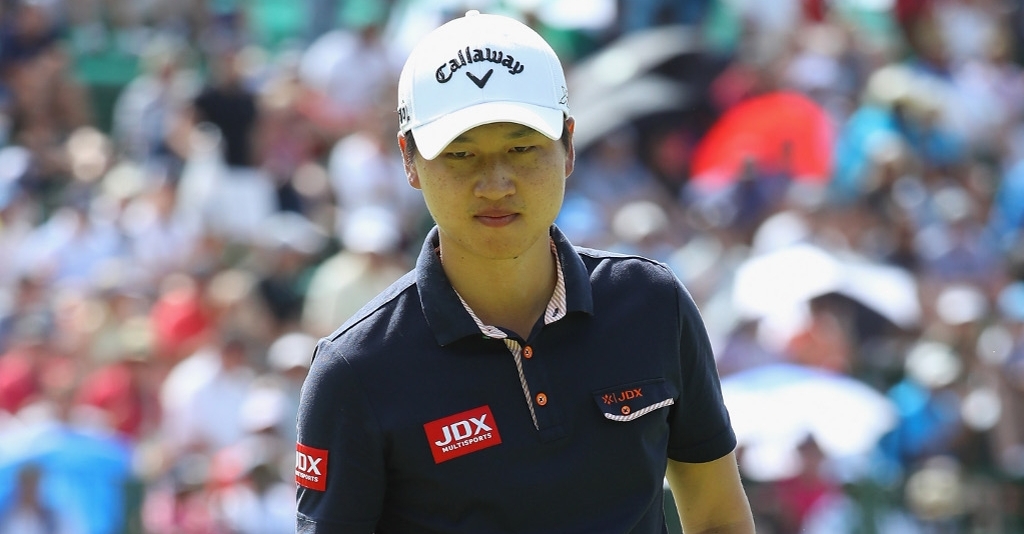 South Korean rookie Jeunghun Wang could become the first Asian winner of the Nedbank Golf Challenge after taking a three-shot lead into Sunday’s final round.

The man who has eaten a hamburger before every round here says he’ll continue doing that after producing the round of the tournament in windy conditions when he signed for a sensational 64 and the tournament lead on 11 under par.

“I’m so happy to shoot 64 and I’m more happy that I didn’t have any bogeys. It was really a great round for me. It was really hard conditions. I thought four under would be really hard to shoot. To shoot eight-under on this course in this wind, I still cannot believe it,” said Wang, who has won twice on the European Tour this year.

Should he win again, he will almost certainly be named European Tour rookie of the year, a distinction he may already have sewn up anyway.

South Africa’s Louis Oosthuizen was on track to finish only one shot behind him but then bogeyed his final two holes to be Wang’s nearest challenger on eight under after a 70.

England’s Andy Sullivan is next best on seven under following a 68.

It was another tough day at the Gary Player Country Club as the swirling winds made club selection a real challenge.

But Wang shrugged off the tricky conditions and went out with four birdies in his first six holes. He eagled the par-five 10th and followed that with a birdie, and then closed off his round with a birdie on 18 for a score his fellow professionals could only shake their heads at.

“You know, it was probably one of the easiest 64s in these conditions that I have seen,” said Wang’s playing partner Sullivan.

“He absolutely flushed it. He didn’t miss many shots and when he did, he chipped it absolutely stone dead. So he didn’t leave himself much hard work to do. Very impressive.”

These guys have season tickets apparently…#NGC2016

Overnight leader Alex Noren, who battled his way to a 75 for a total of five under, was equally impressed by Wang’s play.

“It’s probably one of best rounds I’ve heard of here. It’s so tricky. That’s a fantastic round.”

Wang is doing his best to remain in the present and not think about a victory just yet.

“I don’t want to think about any win. I just want to focus on the last 18 holes and just try to do the same as today,” he said.

Behind him, Oosthuizen is still confident he’s on the right track despite his bogey-bogey finish.

“It was a tough day again. The wind was even worse than yesterday. I would’ve been a lot calmer right now if I was one behind. But I can’t really look at the last two greens. I got the pace on both of the first putts wrong. It’s not nice finishing like that, but I’m hitting it well. So I’m looking forward to tomorrow,” he said.

Henrik Stenson, meanwhile, lies on four under, seven shots back, after a third-round 69. That was four shots clear of Race to Dubai rival Danny Willett, who shot an encouraging 67 after disappointing rounds of 75 and 74.