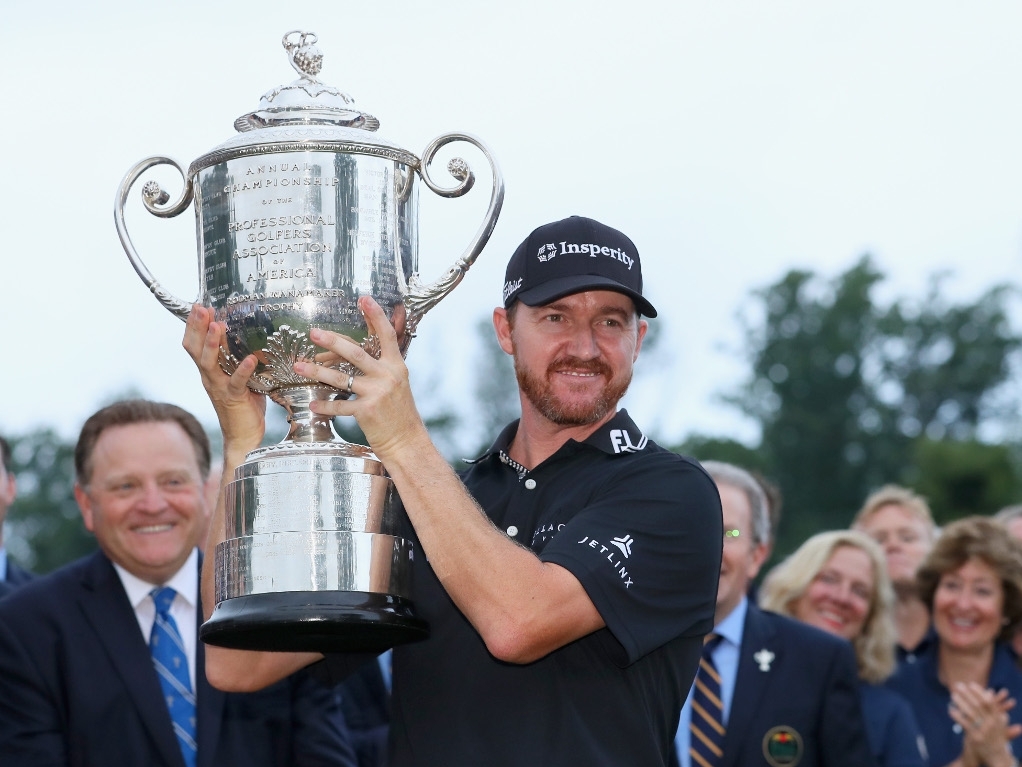 Jimmy Walker staved off a strong challenge from Jason Day to win his first major title at the PGA Championship on Sunday.

Despite having Day breathing down his neck throughout the 36 holes the leaders played on Sunday, Walker stuck to his guns and showed nerves of steel to triumph in the fading light in New Jersey.

Walker, who finished on 14 under, and defending champion Day, who concluded the tournament on 13 under, were locked in an intense battle at Baltusrol Golf Club that went down to the final hole. When the Australian made a 13-foot eagle putt at the par-five 18th to cut Walker's lead to one, the pressure was suddenly on the American, but he maintained his composure to tap in a three-foot par putt to seal a one-shot win.

Daniel Summerhays moved up five spots on the leaderboard to take third place on 10 under, while Japan’s Hideki Matsuyama had his best showing at the PGA Championship, finishing in a tie for fourth with South Africa’s Branden Grace on nine under.

Meanwhile, reigning Open Championship winner Henrik Stenson ended his campaign six strokes behind Walker in a tie for seventh, while Jordan Spieth finished in a tie for 13th on six under.

Walker, whose previous best finish at a major was eighth place at the 2014 U.S. Open, took the turn in level par, but found his touch at the 10th, where he made a 44-foot hole out from the right front greenside bunker. He followed that up with a 30-foot birdie putt at the 11th and continued to stay on track for victory with an eight-foot birdie putt at the 17th.

The birdie at the penultimate hole was the latest edition of Walker and Day trading punches; moments before Walker sunk his putt a giant roar had erupted from the 18th where Day had put himself in line for an eagle. However, Walker would not be swayed off course and nailed the clutch putt.

With Walker waiting to play his second into the 18th green, Day would make that eagle to reduce the American's lead to just one shot. A par would suffice for Walker, but when he found the rough to the right of the green there were momentary whispers that a collapse could be forthcoming. Such thoughts were quickly silenced with a neat chip and a birdie putt that put Walker within three feet. Needing to hole it to avoid a playoff, Walker made no mistake and wrapped up his first major title.

Day was left to rue an early final-round stumble that saw him register two bogeys on his first three holes. The world number one bounced back and drew level with Walker after making birdies at the fifth and ninth. The pair were not tied for long though as Walker’s consecutive birdies at the 10th and 11th put him back in the outright lead.

The defending champion never gave up, and his eagle at the last nearly proved enough to force a playoff, but despite his valiant effort, Day was unable to stop Walker from taking home the Wanamaker trophy and $1.8 million payday.