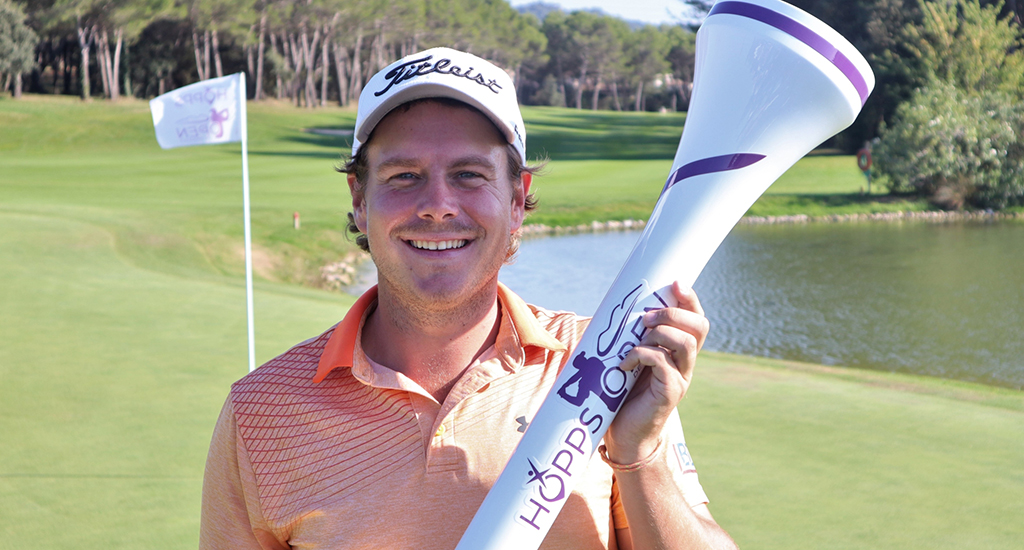 His 16-under-par total was one shot better than that of his nearest rival, German Sebastian Heisele, who was one of two players to shoot the fourth-day low score of seven-under-par 65.

In weather more akin to July than late September, home supporters – of which there were many – saw their favourites Robin Roussel tie fifth, on 13 under, and Antoine Rozner, who had been the joint leader going into the final day, drop back to a share of ninth on 11 under.

While van Meijel celebrated his maiden victory in just his second Challenge Tour season, the host club was also celebrating a successful second staging of the event, which saw good crowds, fine weather and some excellent golf.

And the competitors were keen to recognise the part played during the week by the Severiano Ballesteros-designed course – the Spanish legend’s only design in France.

Shrugging off his disappointment at finishing a shot back from the leader, the 6’6″ Heisele said: “The course is in a great condition. It’s quite a funky course and it’s taken me some time to figure it out.”

He added: “There is definitely some trouble out there if you hit some poor shots, especially on the front nine. You’ve got to be smart because there are some quirky holes out there which you need to manage your way around. On hole eight, you can hit the ball 100 yards right, but, if you go a little bit left, you will go out of bounds.”

And, home favourite Rozner commented: “It’s a good course. You’ve got to keep the ball straight. There is a lot of out-of-bounds everywhere, but you don’t have to hit driver all the time. You need to be precise with your irons because the greens slope a lot, so it’s better to have an uphill putt than a downhill one.”

A testimonial to the strength of the field in this event – and on the Challenge Tour in general – came more than 900 miles north of the delightful Pont Royal, at St Andrews, in Scotland, where Victor Perez, who finished tied fourth at the 2018 Hopps Open de Provence, secured his first European Tour title in the Alfred Dunhill Links Championship, on the same afternoon van Meijel earned his spurs.

Many holes on the Ballesteros-designed course are blessed with a plateau setting, offering stunning views to the Luberon and Alpilles mountain ranges. Technical shaping of shots is required to reach the true, slick greens, and visitors enjoy an interesting, wide variety of holes that form a smooth and seamless experience.

Pont Royal contains some tough holes, for professionals and visitors alike – none more so than the 11th, where players face a 215-yard test across a steep rocky valley to a raised green.

Accommodation at Pont Royal is offered in the 100-room, four-star Moulin de Vernègues hotel and spa, part of Les Collectionneurs, which sits adjacent to the course’s second green. It is located in a charming manor house, with the assets of bygone days, but with a touch of modernity, harmoniously integrated with classical architecture. Self-catering apartments, villas and houses are available within the pedestrianised Pierre & Vacances village, where guests enjoy 20 per cent discount on green fees.

Just 40km north of Marseille International Airport, Pont Royal is easily accessible from most major European cities, and is regarded as one of the top venues in the region. For more information, visit www.golf-pontroyal.com.