USA on the brink of big win 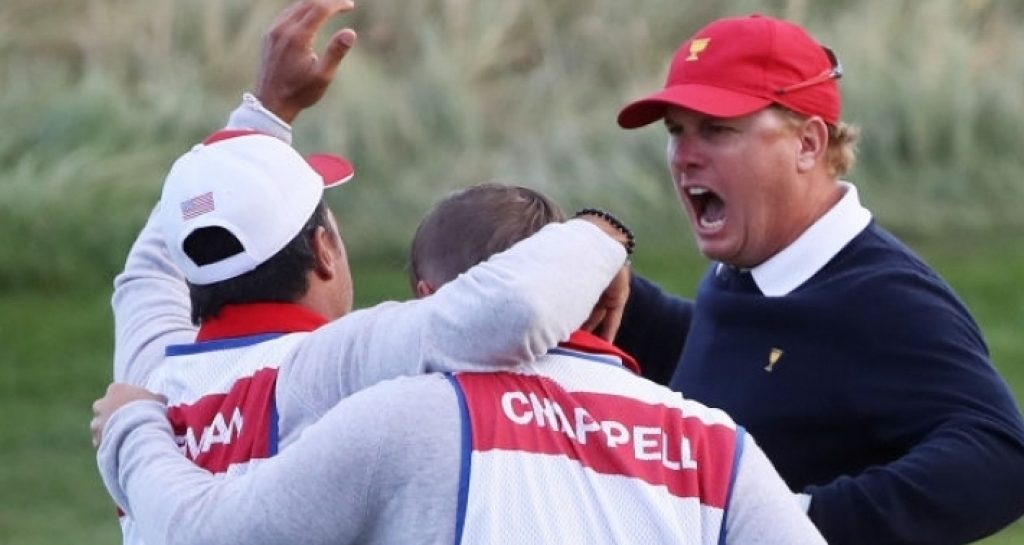 The International team were left facing a resounding defeat at the Presidents Cup on Saturday as the US team almost claimed victory before the final day’s singles had even started.

Needing to win all four afternoon fourballs to wrap up a one-sided victory, the US team were denied as Anirban Lahiri and Kim Si Woo defeated Kevin Chappell and Charley Hoffman 1 UP to leave the score at 14.5 to 3.5.

The US enter Sunday needing to halve just one of the 12 singles matches to guarantee a tie and retain the cup, while winning just one match will seal an outright win.

The most exciting episode on another disappointing day for the International team came thanks to a mid-round rules controversy in the match featuring Patrick Reed and Jordan Spieth.

It occurred on the 12th hole when Spieth scooped up Louis Oosthuizen’s eagle attempt before the ball had stopped moving after it had rolled past the cup.

After a heated on-green discussion Spieth was disqualified from the hole and denied the chance to match Jason Day’s birdie putt.

The ruling allowed the International team to win the hole and move 1 up, but it didn’t matter in the end as Spieth and Reed hit back with three straight birdies from the 15th to win the match 2&1.

The required sweep of all four fourballs had looked on at one point as Daniel Berger and Justin Thomas defeated Venezuela’s Jhonattan Vegas and Japan’s Hideki Matsuyama 3&2, while Dustin Johnson and Brooks Koepka downed Marc Leishman and Branden Grace by the same score.

It was then down to the final match on the course where Lahiri and Kim were 1 down with four to play before Kim birdied the 15th and Lahiri the 16th to turn things around.

Hoffman then chipped in from 65 feet for a spectacular birdie at the 17th, but Lahiri kept his nerve to sink a 20-footer to halve the hole and keep them 1 up.

Pars at the 18th halved the hole and earned the internationals just their second match of the week and a stay of execution.

The United States have won nine of 11 Presidents Cups, including the last six against the International team, which is comprised of players from the rest of the world except Europe.