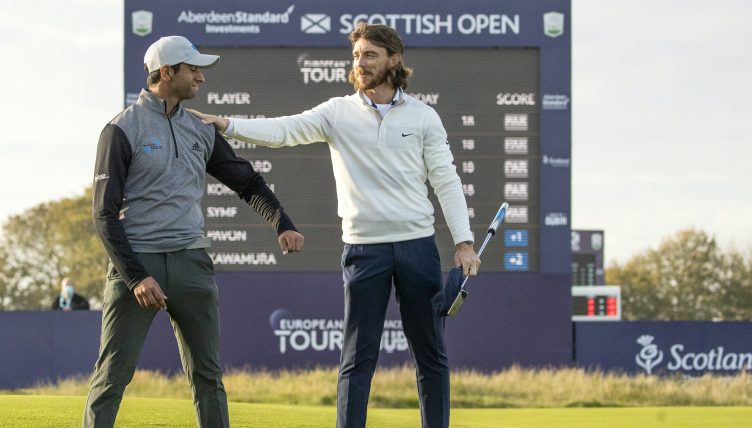 Tommy Fleetwood vowed to “sulk for a few hours” before taking the positives from his performance after losing out to compatriot Aaron Rai in a play-off in the GBP 5.4million ASI Scottish Open.

Fleetwood birdied the last hole of regulation to match Rai’s total of 11 under par at the Renaissance Club, but then missed from three feet for par on the first extra hole after Rai had holed from a similar distance.

The Ryder Cup star had also missed from close range for a birdie on the 16th and said: “I holed one on the last to get into the play-off but my putting really cost me this week.

“That last one summed it up really. It was just a straight pull. It’s disappointing. You always try to look at the positives but I cocked it up on the first play-off hole and that’s that.

“I struggled with my game after Covid and playing in America but today I was in full control of my game. I had a bunch of chances. Made some and missed others. I felt like I played really well.

“But golf is like spinning plates so I’ll have to work on my putting a bit more. No-one beat me over 72 holes. That’s the great thing about it.

“I’ll sulk for about five hours on the way home. I’m sure there are positives when I get to Wentworth (for the BMW PGA Championship), but it just stinks right now. I just have to get better for the next time I’m in that position.

“Clearly my game is coming back. What I’ve been working on is coming good. For a lot of this week I felt more like the player I should be.”

Rai, who finished second in the Irish Open seven days ago, will climb from 183rd in the world rankings to inside the top 100 and collected the first prize of GBP 867,000, a vast improvement on the GBP 10,000 he won for his previous victory in Scotland in 2015 on the EuroPro Tour.

“It’s incredible, it’s a dream a come true,” Rai said: “It was a shame that it finished that way and I was not expecting Tommy to make a five there, but to win a Rolex Series event is very special.

“I think when you’re in the mode of playing, you’re just trying to play golf as you normally do, and it feels like it is starting to sink in now. I played a lot in Scotland growing up and dreamed of playing in a European Tour event in Scotland.

Rai had set the clubhouse target after a superb 64, the 25-year-old from Wolverhampton recovering from a bogey at the second to birdie five of the next six holes before picking up three more shots on the back nine.

Overnight leader Robert Rock looked set to match Rai’s total after he birdied the 10th, 13th, 15th and 16th, only to bogey the last after a clumsy chip from just short of the green.

Playing partner Fleetwood had missed from three feet for birdie on the 16th but bounced back to hole from 15 feet on the last to take the event into extra holes for the third time in four years.

Both players came up short of the green on the first extra hole, Fleetwood from the middle of the fairway and Rai from a bunker.

Rock, who began the day with a two-shot lead, finished alone in third on 10 under, with Australia’s Lucas Herbert and Scotland’s Marc Warren a stroke further back.

Warren briefly held a share of the lead when he followed birdies at the 12th, 13th and 15th with an eagle on the 16th, but playing partner Rai birdied the 16th to edge back in front and Warren bogeyed the last after a wayward drive.

“That tee shot was a sore one,” admitted Warren. “It was in our mind that anything left was out of bounds, really, so anything down the right half.

“I started it the way I wanted, but just a little out of the heel, so it stayed straight instead of the usual draw. Felt like a really good, committed swing but ended up with a horrible lie, worst I’d had all week.”