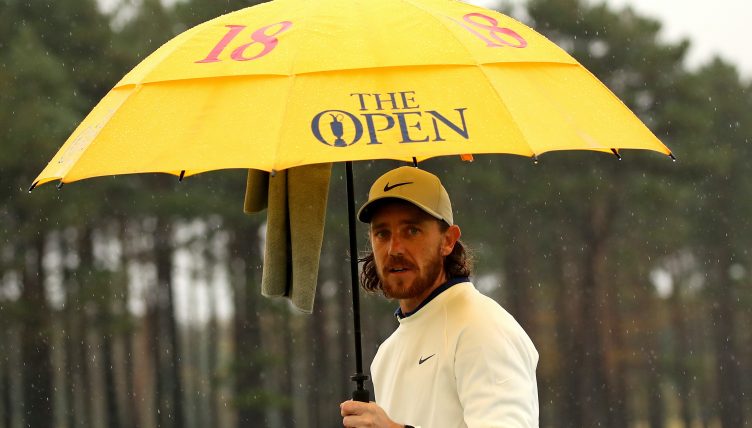 Tommy Fleetwood revelled in horrendous conditions to play himself into contention for a sixth European Tour title in the GBP 5.4million ASI Scottish Open.

Fleetwood defied gusting winds and constant heavy rain, which left parts of the course at the Renaissance Club under water, to card a third round of 69 and finish seven under par, two shots behind fellow Englishman Robert Rock.

The last few groups finished in near darkness and Rock contemplated not continuing on the par-three 17th as he struggled to see the pin, but the 43-year-old parred the last two holes to complete an excellent 72.

“I loved every minute of it,” Fleetwood insisted after ending his round with a birdie on the 18th. “It’s golf isn’t it?

“Let’s face it, with the money we play for these days it does not do any harm does it? It’s fine. I’d play in it every day if that’s what it took.

“I’m really happy and the birdie on 18 left the day feeling really good.
You’re grinding all day and occasionally look at the leaderboard and see
everyone is doing the same and three pars moves you up a few places, so every birdie is like gold dust.

“It was pretty relentless. The rain didn’t stop for half a second and just got worse and progressively worse and windy throughout day. It was pretty tough towards the end.

“The golf shots I was hitting, you have to give yourself a pat on the back sometimes, and I’m really, really happy with how I hit the shots coming in.

“My coach walked in after nine holes so I’ll have to debrief him.”

Poulter began the day two shots off the lead and remarkably played the first 11 holes in two under par before the worsening conditions contributed to four dropped shots in the last seven holes.

“I think it’s pretty good, I have to say,” Poulter said after his 73. “It was damage limitation whenever you missed a green or fairway and that was hard work. That’s as tough a day as I’ve seen on a golf course in 21 years.

“It was a shame towards the end it just got unmanageable really, but on the front nine I played some great golf.

“It’s really easy to sit here and just moan and say the golf course got unplayable, right. I’m not going to do that. I’m going to say it was a massive mental challenge, and we needed all of the greenkeepers’ help to get us here.

“You can’t really see a pin over the closing couple of holes and the green staff did an incredible job to give us the chance to somewhat get into the clubhouse without stopping.”

Rock, who held off Tiger Woods to win his most recent European Tour title in Abu Dhabi in 2012, declined to speak to reporters after his round.

Victor Dubuisson, Adri Arnaus and Gavin Green had all made the cut on the mark of one under par, but matching rounds of 67 in the slightly better early conditions lifted the trio into a tie for sixth with England’s Andy Sullivan, who returned a 69.

Dubuisson was unbeaten on his Ryder Cup debut at Gleneagles in 2014 and reached a career-high of 14th in the world the same year, but began this week ranked 400th.

The 30-year-old played just twice in 2018 following surgery on a perforated
eardrum and has recorded just two top-10 finishes in the past two seasons.

The Scottish trio of Robert MacIntyre, Marc Warren and Grant Forrest are part of an 11-strong group on four under par, five shots off the lead.