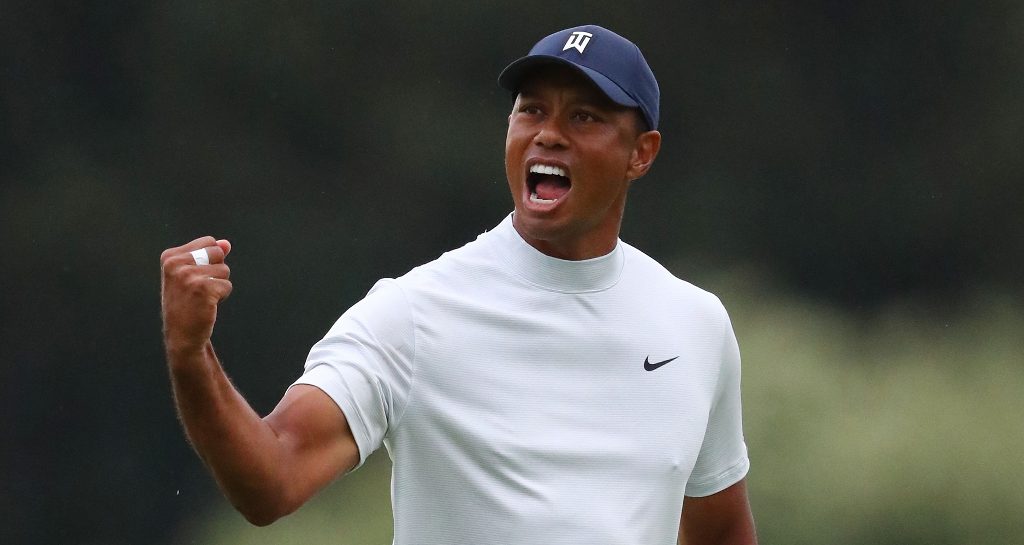 Tiger Woods got all tangled up with a security guard at the Masters on Friday but it didn’t stop him from surging into contention for a 15th major title.

Woods lies just one shot off the lead after a superb four-under-par 68 at Augusta on Friday.

The former World No 1 mixed two birdies with two bogeys in his opening eight holes but was able to cut out the mistakes for his final 10 – while making four more birdies – to finish just one stroke behind the five-man group at the top.

It’s sign of Woods’ confidence in his game at the moment that he felt his 68 should have been much better.

“I felt like I left a few shots out there. I stayed patient and kept grinding and gave myself a few chances out there,” he said.

“I missed a few putts out there but I am not too bummed out about it because I hit it on my lines. I can lift with that.

“If I keep hitting my putts on line, they will start dropping. I was happy with my putting.”

Woods was one of many players still on the course when the threat of lightning brought everyone off for around 30 minutes.

He had just recorded the first birdie of the day on the challenging 11th hole and played a great tee shot at the par-5 12th, but missed out on a birdie when he resumed from the fairway.

Then came the strangest incident of the day on the 14th hole. Moments after Woods pulled off an excellent recovery shot from the rough following an errant drive, a security guard ran in to try and control the crowd, only to slip on the wet ground and slide into Woods’s right ankle.

Block or Charge? Did I do that right @RexChapman pic.twitter.com/EfN65bks4u

Woods looked in pain afterwards, but he appeared to shrug off any ill-effects, and even ended up birdying the hole after sinker a 15-footer on the green.

He then made another birdie at 15 after holing out from even further away to ultimately sign for a hugely competitive 68.

Two birdies in a row places Tiger Woods at six under par, one off the lead.#themasters pic.twitter.com/uJ5oICPr34

Asked about the incident with the security guard afterwards, Woods said: “It is what it is.

“Accidents happen. We move on. I am good. I am fine. Other than four back surgeries and four knee surgeries, I am great.

“I have had galleries run over me. When you play in front of a lot of people, things happen.”