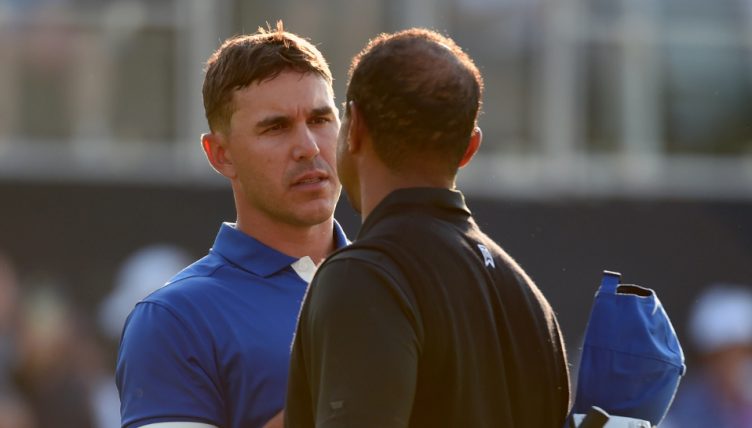 A magnanimous Tiger Woods heaped praise on playing partner Brooks Koepka on Friday, despite his own disappointment at missing the cut.

A month after his incredible comeback win at the Masters, Woods failed to make the weekend at the PGA Championship after rounds of 72 and 73 left him one shot above the cutline.

Tiger Woods misses the cut by one stroke.

This is the ninth time he's missed the cut in a major as a pro. pic.twitter.com/GUP1647lix

Woods was paired with runaway leader Brooks Koepka for the first two rounds at Bethpage Black, and it seemed more than a little significant that the 29-year-old finished 17 strokes clear of Woods over the two days of competition.

As impressive as Woods’ Masters victory was, the 43-year-old golfer realises that he no longer represents the future of the sport, and in Koepka the game might just have found its heir apparent, a player who has the potential to be as dominant as Woods was, even if he has some ways to go yet.

“At 29 he has got many more years ahead of him where he can do this,” Woods said. “He paid his dues. He found a game and a dedication that he needed to play well and he’s doing that.”

Koepka finished just a stroke behind Woods at the Masters last month, and came as close as anyone to preventing that fairy tale victory.

And now, he’s threatening to run away with a major championship in a way we haven’t seen since, well, the days of Woods himself.

“That adds up to a pretty substantial lead and if he keeps doing what he’s doing, there’s no reason why he can’t build on this lead.”

Woods also said he could see himself in Koepka.

Reflecting on his own performance, Woods admitted it simply wasn’t good enough. While he did manage three birdies on the day, he also made plenty of bogeys, including a particularly bad patch when he made four in the space of five holes between the 10th and 14th.

“I’ve enjoyed being the Masters champion again and the PGA was a quick turnaround. Unfortunately I just didn’t play well.”