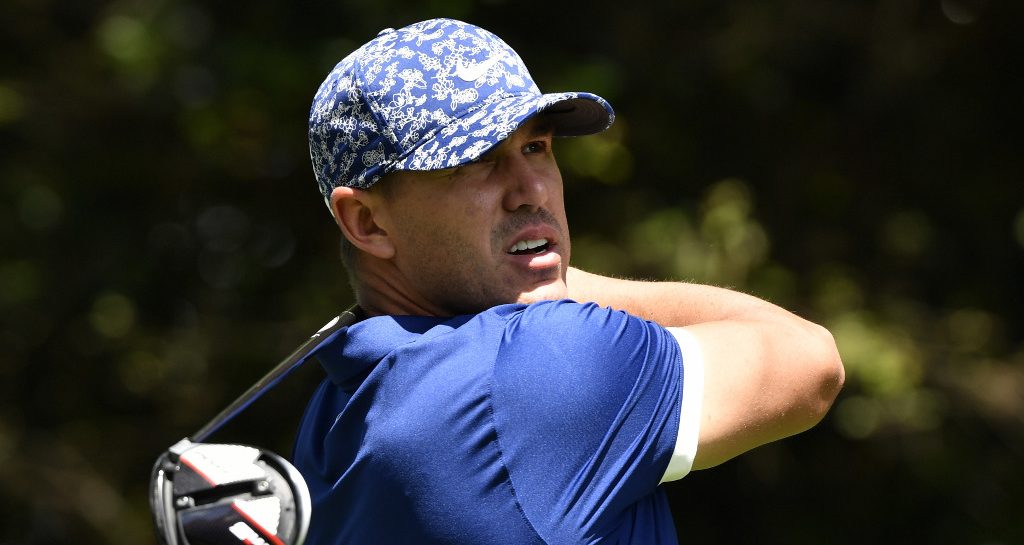 Brooks Koepka’s stunning form in the majors continued as he grabbed a share of the first-round lead at the Masters on Thursday.

Koepka, a three-time major champion and a winner of two of the last three majors he’s played, grabbed a share of the lead after the opening round at Augusta courtesy of a stellar six-under-par 66.

That put him level with five-time PGA Tour winner Bryson DeChambeau, and one shot clear of three-time Masters winner, Phil Mickelson, who continues to shine at the highest level despite being just two years shy of fifty.

Surprise and excitement ruled the first round of #themasters, with a glittering array of stars filling the leader board. pic.twitter.com/QjvZJXKWO8

While Tiger Woods was among the early starters and thrilled fans with a two-under-par 70 to lie just one shot off the lead set by South African rookie Justin Harding, the likes of Koepka, DeChambeau and Mickelson lit up the course later in the afternoon to take control of the leaderboard.

Koepka lit up the fabled course with five birdies in the space of six holes to soar to a 66, but he was soon joined by DeChambeau who roared home with four straight birdies to join him on six under.

Watch the key shots from the first-round 66 that gives @BKoepka a share of the lead at #themasters. pic.twitter.com/Jpk4UB1Bpa

Mickelson also finished like a house on fire, with five birdies in the last seven holes for his five-under 67.

He very nearly aced the par-three 16th and a closing birdie at the 18th ensured he finished just one shot back of the leaders.

Five birdies in the last seven holes moved @PhilMickelson within one stroke of the first-round leaders. #themasters pic.twitter.com/h2am3vjwJT

Meanwhile, World No 2 Dustin Johnson is just two shots off the pace alongside Englishman Ian Poulter after the duo both opened with 68s.

Early starter Rory McIlroy, who needs only to win the Masters to complete the career Grand Slam, made plenty of birdies but also far too many bogeys – six in all – as he had to settle for a one-over-par 73.

That wasn’t nearly enough to keep pace with the guys tearing up the course in the afternoon.

Asked about his hot stretch on the back nine, Koepka said he got into the zone and wasn’t even really thinking about what he was doing.

“I don’t want to say you kind of black out, but you’re not really thinking about anything,” he said. “You make it kind of a reaction sport. You kind of see your shot, and then whatever you see just pull the trigger and go.

“It seems like an hour period where that goes by in about five, 10 minutes.”

DeChambeau, meanwhile, admitted it was the best he’d ever played in a major.

Watch the 66 that gives @b_dechambeau a share of the first round lead in under three minutes. #themasters pic.twitter.com/jkfyN3VQKj

“That was probably the best ball-striking round I’ve had in a major championship,” the 28-year-old said.

“I drove it and I shaped it, flighted it, and coming into the greens, controlling the spin, trajectory – everything there was about as good as I could have hit it today.”

As for Woods, his 70 has put him in the reckoning, although it could have been even better, had he managed to birdie the par-5 15th and not missed a nine-footer for par at 17.

Watch @TigerWoods' first round 70 in under three minutes. #themasters pic.twitter.com/c3QDJKr4qM

“I felt like I played well and I did all the things I needed to do today to post a good number,” he said.

“I drove it well, hit some good iron shots, speed was good on the greens.”