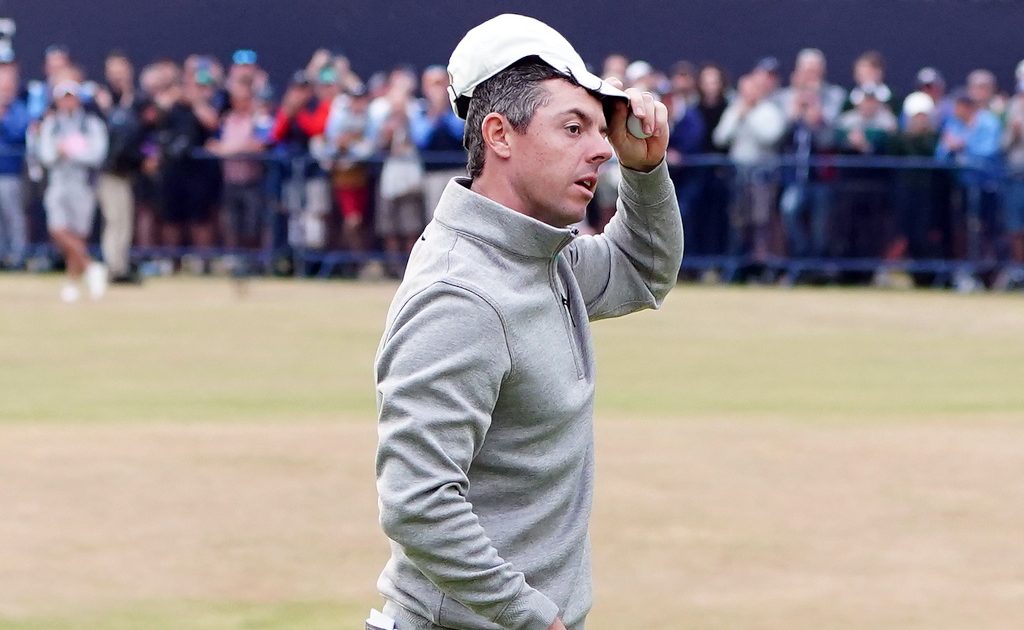 Five days after describing winning The Open on the Old Course as golf’s Holy Grail, Rory McIlroy will take a share of the lead into the final round of the 150th Championship following a stunning Saturday at St Andrews.

McIlroy attributed it to part-skill, part-luck but admitted holing a bunker shot for an eagle two on the 10th was “a bonus”. The Northern Irishman splashed out and basked in the roars of the crowd as the ball gently rolled towards the hole and dropped.

The American took advantage of favourable conditions early on with a birdie blitz. Kisner, the world number 25 who made the halfway cut right on the mark of level par, was in the second group out just after 8.30am but no-one would have predicted the fireworks which followed. His outward total of 30 was two short of the record lowest score for an Open front nine – set by Denis Durnian at Birkdale in 1983 – and one off Tony Jacklin’s St Andrews front-nine Open best in 1970. It included six birdies in his first eight holes and frustratingly for the 38-year-old he also left two good other opportunities marginally close in a remarkable display of consistently good putting. His back nine could never live up to what went before but three birdies and two bogeys saw him catapult himself up the leaderboard from joint-last to tied 13th at the close.

Tiger Woods has been – at any given moment – the youngest man with five or more major wins for almost 22 years. Rory McIlroy will change that with a win on Sunday.

The 495-yard par-four 17th played as the toughest hole for the second day running, yielding just one birdie all day, with 44 bogeys, three doubles and one triple-bogey, resulting in a scoring average of 4.63.

The driveable 352-yard par-four ninth: there were seven eagles, 50 birdies, just one bogey, for a scoring average of 3.24.

Becoming dry after light overnight rain and turning increasingly bright towards midday. Wind up to 12mph in the morning, gusting to 18mph in the afternoon, easing to five to 10mph in the evening.