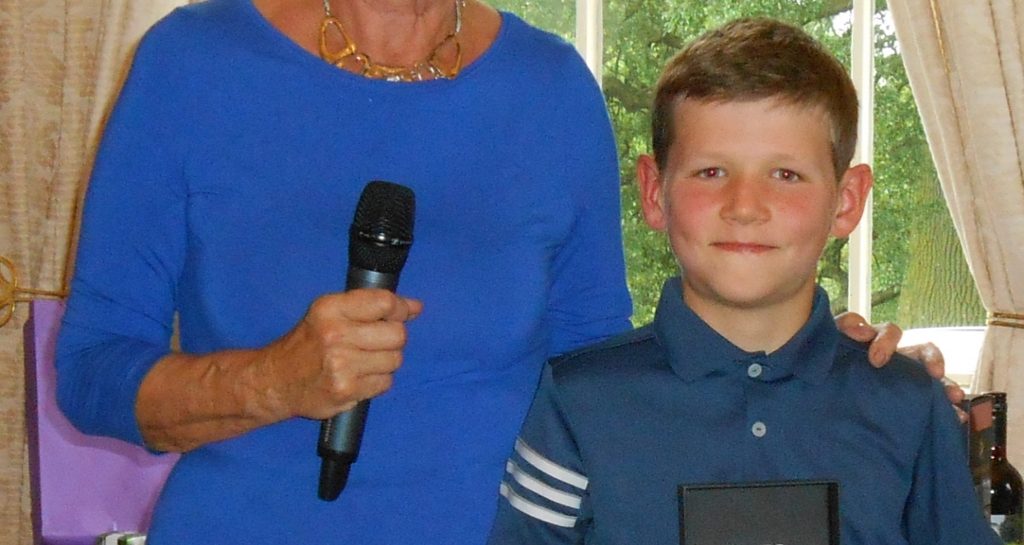 A 10-year-old Shrewsbury golfer is now the proud owner of an exclusive designer watch after Europe’s largest online social golfing hub, HowDidiDo, rewarded him for scoring an impressive hole-in-one.

Zach Banks, a member at Shifnal GC, aced the club’s signature hole, the 176-yard, par-three 13th – which features a 100-yard carry over water – but, as he was not yet registered with HowDidiDo, he wasn’t eligible for its renowned BOSS watch promotion which rewards all registered golfers with a timepiece for achieving a hole-in-one in a club competition.

Banks was competing in his first junior competition at the club and his round was to be the second card he put in to qualify for an official handicap. But officials at HowDidiDo got to hear about his success and agreed with BOSS to make a special presentation of the watch to the youngster as his circumstances were “exceptional”.

Zach’s dad, John, who was caddying for him in the event, explained: “A slight breeze was blowing into his face, so he took his driver and hit it straight at the flag. It bounced once and then hit the base of the flag, flush on – it made a right racket.

“Then his jaw just opened before he went ballistic and we both started jumping around and screaming.

“He knew about the BOSS watch promotion and asked if he would be eligible for a watch. We had to tell him we weren’t sure because, as this was only his second card going in, he wasn’t actually registered on the site yet. But HowDidiDo offered to extend the gift of the watch to him and also sent through a few other goodies for him as well.

“But he didn’t know about any of it until he was surprised by the presentation at the golf club. You can imagine his delight!”

Although it was only his first competition round at the club, Zach had already previously scored an ace – on the 84-yard, 13th hole at the 3 Hammers Golf Complex short course, in Wolverhampton, when he was aged just nine. And his second, at his home club, puts him one up on his dad, whose sole ace came a month after his son’s first, also at 3 Hammers.

John added: “His elder sister was with us when he scored his first ace and her second visit to a golf course was when I scored mine. She must have thought golf was a really easy game!

“Zach started playing when he was about five. In his first year at school, when they were all asked what they wanted to be when they grew up, he said he wanted to be a golfer. And he’s still hell-bent on it.

“We believe when his handicap finally comes through it will be about 22. We think he has a lot of potential, but we’re not pushing him. We just want him to enjoy himself.”

HowDidiDo spokesman Barry Dyett, chairman of Yumax Media, said: “When we got to hear of Zach’s feat we pulled a few strings to allow him to receive a watch as we felt his were exceptional circumstances. After all, he was earning his handicap in a club competition and it seemed only right and proper that he should be rewarded for his efforts, particularly at such a young age.”

HowDidiDo is Europe’s largest online golfing community, and holds data from in excess of 53 million rounds of golf, along with the handicaps, results and scores of more than 1,300,000 UK golf club members. More than 547,000 golfers currently use the website, while in excess of 1,800 golf clubs currently use the HowDidiDo system – courtesy of their use of Club Systems International software. HowDidiDo allows members to analyse their game and compare performance with other players, at their own club or across the entire HowDidiDo network.

It is rapidly becoming the largest online, social golfing hub in the world, with new, engaging and exciting content for golfers everywhere to enjoy. It is also used for official CONGU handicapping and competition results.

As well as developing one of the most active sports websites in the world, HowDidiDo also powers the annual Titleist Order of Merit, the largest golf event of its kind in the country, which sees more than 20,000 golfers take part each year, making it one of the UK’s most subscribed sporting competitions, behind only events like the London Marathon and Great North Run.