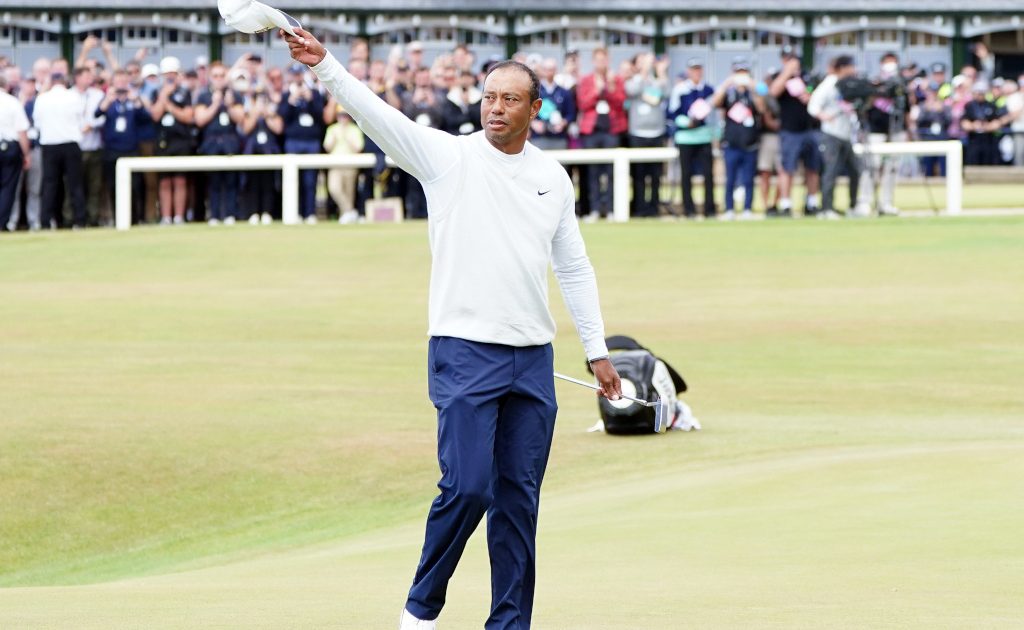 A tearful Tiger Woods bade a likely farewell to St Andrews but promised he would be back to play in The Open.

The famously stoic 46-year-old was visibly moved by the reception he received as he walked down the 18th fairway of the Old Course – where he has won two of his three Claret Jugs.

He and the thousands of fans who lined both sides of the fairway already knew he would miss the cut, lying nine over par, and with the event unlikely to return to the Scottish venue for some time – even though St Andrews is the only Open course which enjoys a five-year rotation – the 15-time major knew the significance of the moment.

“It’s very emotional for me. I’ve been coming here since 1995 and I don’t know when the next one comes around if I will be physically able to play by then,” said the American, who after numerous back and knee problems almost had to have his right leg amputated after a car crash last year.

“So to me it felt like this might have been my last British Open here at St Andrews and the ovation and the warmth was an unbelievable feeling.

Next year’s event is at Royal Liverpool in Hoylake – where Woods won his other Claret Jug in 2006.

A quirk of scheduling meant Woods’ farewell felt like a specific point in time and the final transition from old to new.

While he was taking in the applause down the last, major winners Rory McIlroy (33) and 25-year-old Collin Morikawa, the defending Open champion, plus world number five and Olympic gold medallist Xander Schauffele (28) were teeing off at the first.

Even though they were still actively involved and looking to put themselves into contention for the weekend, all showed due reverence to the greatest player of their generation.

Woods’ playing partners – newly-crowned US Open champion Matt Fitzpatrick and Max Homa – both stayed back to allow him to walk alone over the Swilcan Bridge just like the greats of Jack Nicklaus, Arnold Palmer, Tom Watson and others before him had done.

And that acknowledgement was appreciated by a player who, in his pomp, would barely give his peers the time of day as he dominated the game as world number one.

“I understand what Jack and Arnold had gone through in the past. I was kind of feeling that way there at the end,” he said.

“Just the amount of understanding and respect from all the people that are involved in this event, that come out in support of the players, the nods I was getting as the players were going out.

“I looked over and Rory gave me a tip of the cap. JT (Justin Thomas in the group behind McIlroy) did the same. There’s something to it that’s just different.

“From a players’ fraternity level it’s neat to see that and feel that, and then as I got closer to the green the ovation got louder and I felt like it just came to a head right there as I was walking to my golf ball.

“I had a few tears. I’m not one who gets very teary-eyed very often about anything.”

Woods was asked whether he had thought about a ceremonial send-off on the famous bridge over the burn which guards the first green and cuts across the 18th fairway as he walked to the tee.

“I committed to just chipping a 3-wood down there and as I was walking off the tee I felt the guys stop and I looked around (thinking) ‘Where the hell is Joey?’. (his caddie Joe LaCava).

“He stopped back there, so I gave him the club. That’s when I started to realise; ‘Hey, the next time it comes around here I might not be around’.”

Retirement had been talk of the tournament at the start of the week but having dispelled that notion on Tuesday he doubled-down as he headed out of St Andrews.

“I’m not retiring from the game,” said Woods, who said he is likely to return to St Andrews for a social round with his son Charlie, especially as the honorary membership awarded this week affords him a locker in the R&A clubhouse and guarantees him a tee time.

“It’s a struggle just playing just the three events I played this year.

“That in itself was something I’m very proud of. Hopefully we do more hard work and give myself some more chances next year to play a few more events.

“I have nothing planned. Zero. This is it. I was just hoping to play this one event this year.

“I understand being more battle hardened (by playing more) but it’s hard just to walk and play 18 holes.

“People have no idea what I have to go through and the hours of the work on body, pre and post, each and every single day to do what I just did.”