Swans kick off with FootGolf 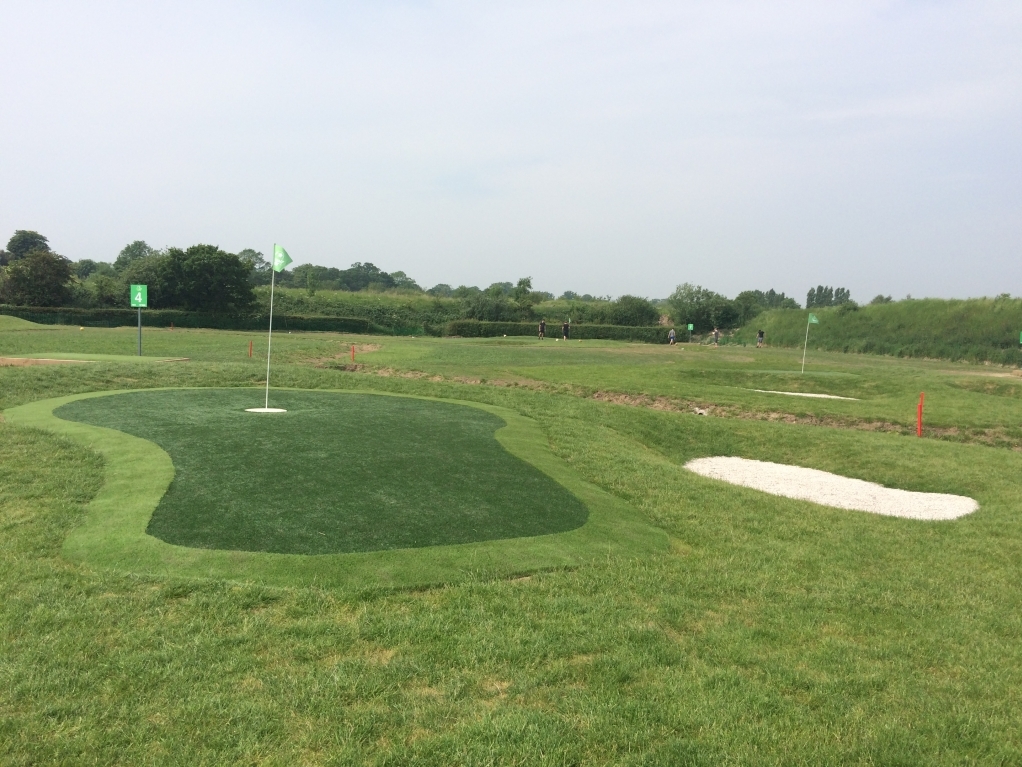 One of the UK's longest-established golf design practices has embraced the UK's fastest-growing sport by designing a FootGolf course in Cheshire.

FootGolf Chester, the first purpose-built FootGolf course in Cheshire, has been designed by Suffolk-based Swan Golf Designs (SGD) and opened as a nine-hole facility with the possibility of extending to 18 holes.

It is believed to be the first course to be designed by a golf design practice, with most FootGolf venues, to date, utilising existing land at golf clubs where the target has been an enlarged cup alongside an existing ‘regular' green.

The premise of the burgeoning sport is the same as golf, in that participants attempt to propel a ball into a hole, but in FootGolf they kick a ball from tee to green rather than playing it with a club – and the ball is a standard size football.

Putting its architectural experience and expertise to the diversified form of the game, Swan Golf Designs has teamed up with north-west based Bell Developments to establish the new venue, which has opened to much acclaim.

William Swan, a director at the family-owned practice, which has been designing golf courses for more than 50 years, explained: "FootGolf Chester has been designed as if it were a par-three golf course – with holes varying in length from 35 yards to more than 80 yards, But for FootGolf, they play as par threes, par fours and par fives.

"The green and tees are artificially surfaced, but the remainder of the course is natural grass and is able to be mown with a single machine. The course also features some two dozen bunkers, further enhancing its appearance and difficulty."

Martin Redrup, golf professional and manager of the facility, added: "We have been simply amazed at the reaction of the local population to our FootGolf course and just how, in such a short time, it is in heavy demand.

"It just goes to show that another form of golf can prove inviting and attractive to so many people. It is taking groups less than an hour to play a round and there is no doubt that our dedicated FootGolf is proving a great draw for young and old, of both genders, and, most importantly, families who want to have some fun."

A simple and modest pavilion, with terracing overlooking the holes, complements the course and provides food and refreshments to the players, as well as functioning as the management centre of the facility.

Mike Bell, a director with Bell Developments, said: "We are delighted with the design of this first FootGolf course which William and Howard Swan have conceived and helped us build.

"Given the tremendous demand which we have generated I can see us moving forward with considerably more of this kind of facility in the north-west as well as in other parts of the country. We have already been approached by a number of municipalities looking to establish FootGolf courses in their parks and public areas, as well as some commercial operators who see FootGolf's ability to attract a wide and different customer base.

"Perhaps, most excitingly, some professional football clubs, including one from the Premier League, have asked us to look at putting dedicated FootGolf layouts into their training grounds. I see this as a great way for golf, in this Olympic year, to change its image and reverse its decline. After all who knows just how many FootGolfers will be encouraged to take up the game?"

SGD is an independent and professional golf course architecture firm with a track record of providing clients with successful design solutions on golf course projects for more than 50 years.

Borne out of the successful golf course designs undertaken by Alex Swan with three-time British Open Champion Sir Henry Cotton and continued by Alex's son, Howard, and grandson, William, SGD has established itself as a leader in the field.

Based in the UK, SGD has earned commissions on four continents having designed or renovated courses from the UK to the USA, Brazil to Bosnia, Czech Republic to China, Iceland to India and Spain to South Africa among many others.