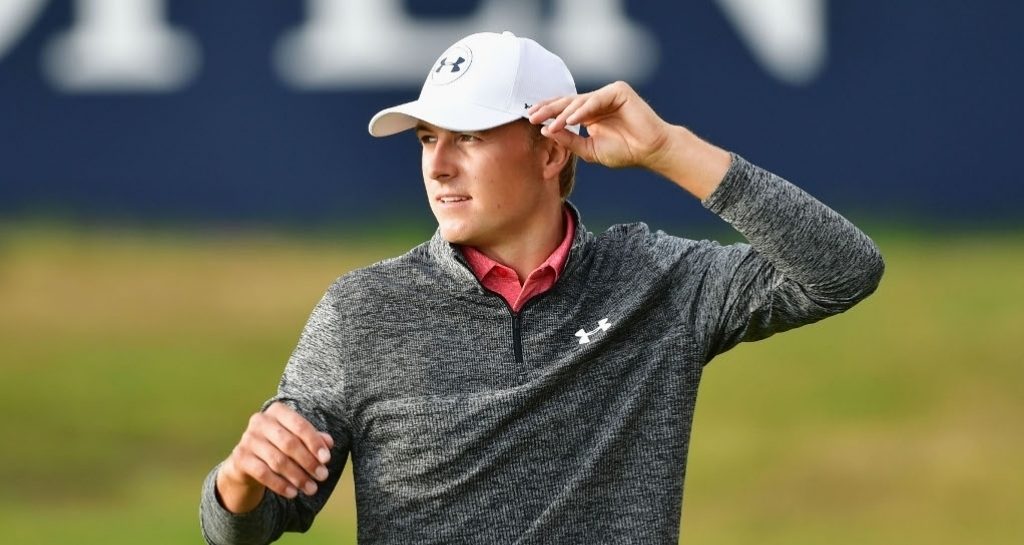 Jordan Spieth will take a commanding three-shot lead into the final round of the 146th Open Championship at Royal Birkdale.

Starting the third round with a two-shot lead, the unflappable American added a classy five-under-par 65 in receptive conditions to take his total to 11 under par and create more distance between himself and the rest of the field.

Low scores were there for the taking on Saturday, and while several players were able to make the most of the conditions, Spieth was also able to cash in superbly and further extend his lead.

The 23-year-old looked cool as a cucumber as he added three birdies prior to the turn and two more after to keep his closest challengers at bay. He nailed a 24-foot putt at the 18th for his fifth birdie to finish the round in some style.

Three shot lead! @jordanspieth has the advantage heading in to Round 4. For more videos visit https://t.co/Y0Ljiq6Hze. #TheOpen pic.twitter.com/G6drB70d9Z

The last time Spieth found himself in such a dominant position in a major – at the 2016 Masters – he threw away his advantage with a spectacular collapse on the last day. Sunday's final round at Birkdale, then, provides an opportunity for him to banish those major demons once and for all.

"I've had a five shot lead in a major and squandered it before," Spieth said after his round. "I've had the height and the humbling. I will keep my head down. That's the biggest thing to do in the next 20 hours. Stay loose, smile a lot and if I play like I did today, things will take care of themselves."

The third round wasn't all about Spieth, however.

Earlier in the day, Branden Grace made history by becoming the first player in history to shoot a 62 in a major championship.

The South African carved up Birkdale with eight birdies in a flawless round of golf that guaranteed him a place in the record books.

"What a round of golf. What a moment from @BrandenGrace." pic.twitter.com/mN48Ml4HiH

Several players had come close to the mark in the past – most notably Jack Nicklaus, who missed a three-footer for a 62 in the final round of the 1980 US Open – but Grace is the first man to close the deal.

He didn't even realise what he'd done until his caddie informed after the round. And his caddie only knew because playing partner Jason Dufner's caddie let him know about it on the 18th green.

"We knew what the score was, but I had no idea I was about to shoot the lowest round ever. It's nice to get in the zone like that, when you don't really know what's going on," Grace said.

"My main thing was not wanting to finish with a bogey. To seal the thing was pretty special.

"I was in the zone, trying to finish the round and it's never nice to finish with a bogey. After I made it, my caddie told me the situation and that made it even better."

We will have to find a special space of clubhouse wall for this piece of history #TheOpen #62 #recordbreaker pic.twitter.com/QVzKAMrGUf

Grace's round lifted him to four under par and into a tie for fifth place with Japan's World No 2 Hideki Matsuyama, who bounced back superbly from a second-round 72 with a 66.

At seven shots back, however, they probably need Spieth to make some big mistakes on Sunday, although another 62 from Grace could seal the deal regardless.

Spieth's most realistic challenger is fellow American Matt Kuchar, who was superb on Saturday, shooting 66, but still found himself three shots back in second at the end of the day's play.

Koepka added a 68 while Connelly shot an impressive 66, but at six shots adrift, they also have their work cut out for them.

Further down the field, a superb 64 from World No 1 Dustin Johnson still left him eight shots behind Spieth at the end of the day.

Rory McIlroy looked all set to make a big charge with three early birdies, before two bogeys and a nasty double brought him crashing down to earth. He had to settle for a 69 that leaves him nine back.

McIlroy lies alongside Englishman Ian Poulter, who could only manage a 71 as he fell off the pace.