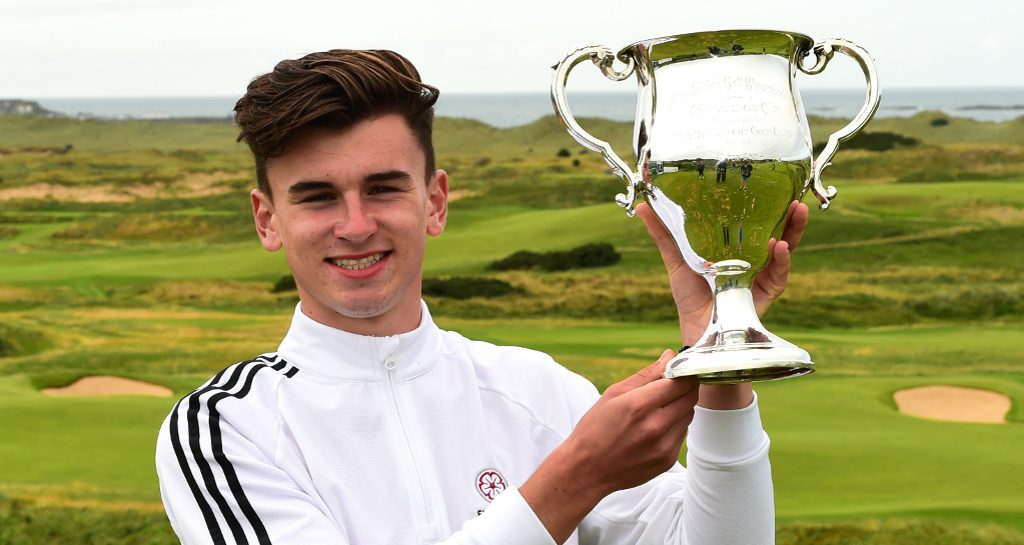 Stoke Park’s Conor Gough became the first Englishman to win the Boys Amateur Championship since current world number 42 Matthew Fitzpatrick in 2012, when he triumphed at Royal Portrush, on Sunday.

Gough, 15, defeated Spain’s Jose Luis Ballester 3&1 to not only guarantee himself entry into final qualifying for the 148th Open Championship, also at Royal Portrush, but also a place in the 124th Amateur Championship, at Portmarnock. Furthermore, he has secured an automatic spot on the European team for the Junior Ryder Cup at Golf Disneyland, Paris, from September 24-25 and seems certain to be selected for the Great Britain & Ireland team to face the Continent of Europe in next week’s Jacques Léglise Trophy, in Finland.

Following a closely contested morning round, Gough remained in the driving seat with a two-up advantage for final 18 holes in the afternoon.  With a slightly bumpy start he recorded a double bogey at the 20th followed by a bogey on the 21st which squared the match, but then regained his composure to chip in for eagle on the 30th to go one hole ahead.

Gough proceeded to grow in confidence, carding another birdie at the par-four 32nd to double his lead, leaving him requiring just a half for victory at the next hole. And, when Ballester found a greenside bunker on the 35th, the Spaniard conceded the hole and the match.

Gough, who plays off a handicap of plus three, said: “I feel incredible. It’s a dream come true. I never thought it would have happened this year. I knew I was playing well but I didn’t quite think I’d go this far. Now I’m here, the winner, so I’m really happy with myself”.

“The turning moment was 11. I made a 15ft putt birdie to stay all-square and then 12 was big for eagle. I parred 13 and then made another really important birdie on 14.

“Jose was really good. He gave me a very good game and he impressed me quite a lot with his irons – he was hitting it close. I thought I may be picked for the Jacques Léglise Trophy before but I’m hoping now this has really secured it.

“I have had an incredible season. I don’t think I have finished outside the top 12 in any competition this year so I am just playing really well and I’ve managed to keep the form going”.

“Matt Fitzpatrick (the 2012 Boys Amateur Champion) is a very good person to follow. If I can keep on following in his footsteps I won’t be doing too bad. If I get into the Open, especially here at Royal Portrush, that would be a real dream come true.”

Gough’s coach at Stoke Park, head of instruction Chris Murtagh, added: “This is an outstanding achievement for Conor given that he has just turned 15. He is a fierce competitor who has the upmost belief in his ability, and this season he has surpassed all expectations. We are delighted to have Conor on the scholarship programme at Stoke Park.”