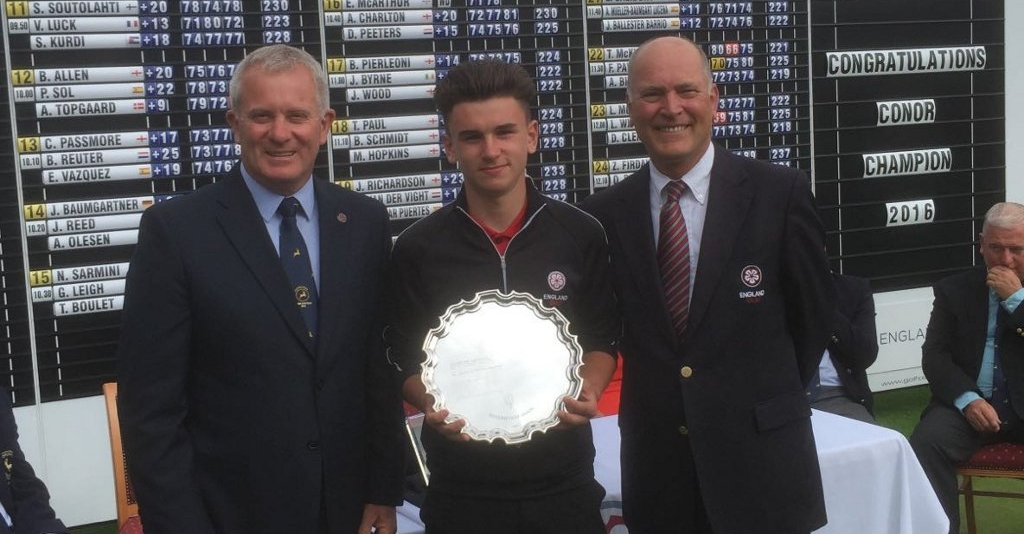 Gough's three-round, two-over-par score of 212 was enough to see off the international field in the event at Porters Park Golf Club, in Hertfordshire, to give him victory by an impressive four strokes.

It topped off a remarkable week of successes for the young man. Earlier he had secured the Douglas Johns Trophy, the BB&O under-15 championship, and finished the week by recording the best gross score in Stoke Park's junior club championship.

Other Stoke Park youngsters also showed up well in the Reid Trophy, illustrating the club's impressive depth. Tom Gregory, 13 – who is also eligible to compete next year – was tied 12th; 14-year-old Taylor Paul was tied 21st; and Carl Banner, 13, was level in 61st spot.

James Jewell, Stoke Park PGA professional and coach to many of the juniors, said: "We are immensely proud of the performances in the Reid Trophy. Conor's stands out, obviously, because it was such an emphatic and impressive win. But we are also very proud of the overall showing of Stoke Park juniors. No other club demonstrated the strength in depth that we did and it augurs very well for the future."

Stoke Park Country Club, Spa & Hotel is one of just two five-AA Red Star golf clubs in England and the historic land on which it stands is recorded in the Domesday Book of 1086. It was awarded the accolade of ‘Ultimate Members Club' at the fifth annual 59Club Service Excellence Awards, held earlier this year.
The historic course played host to the PGA Matchplay in 1910 and, even more famously, the golf match between Sean Connery's James Bond and Auric Goldfinger, in the 1964 film, Goldfinger. It also has a thriving golf club with around 800 active members.