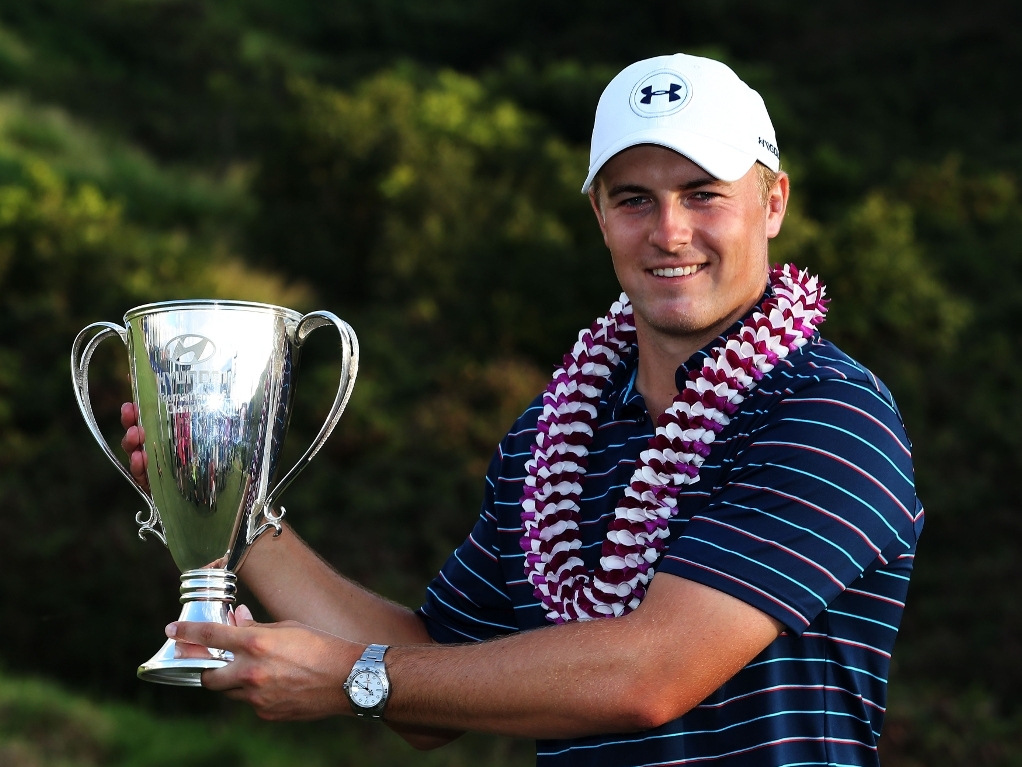 Jordan Spieth began his 2016 season with a bang as he cruised to an eight-shot victory at the Tournament of Champions.

Spieth carded a final round six-under-par 67 to finish on 30-under, becoming only the second golfer in PGA Tour history to finish a 72-hole event at 30-under or lower. Ernie Els holds the record after he finished on 31-under at the same event in 2003.

Defending champion Patrick Reed was Spieth’s closest competitor as he ended the tournament on 22-under while Brandt Snedeker and Brooks Koepka finished in a tie for third on 21-under.

World number six Rickie Fowler finished 10 strokes behind Spieth to occupy fifth place on the leaderboard, while world number two Jason Day and world number four Bubba Watson tied for 10th after they closed on 15-under for the tournament.

After rounds of 66, 64, and 65, Spieth continued his sizzling run of form on Sunday and he kicked off his round with a 35-foot birdie putt at the second before making another birdie at the sixth. It was at the eighth that Spieth made the only blemish of his round when he failed to hole a 14-foot par putt.

However, the reigning Masters and U.S. Open champion made up for it on the next hole with a birdie at the par-five ninth. The Texan made it back-to-back birdie when he sunk a 14-foot birdie putt on the par-four 10th hole to move to 27-under.

The victory was all but assured as Spieth strode along the back nine, but not content with enjoying the spectacle Maui views, the 22-year-old continued to reel off the birdies.

Spieth closed with three birdies on his last four holes – including a three at the par-four 16th hole after he put his 75-yard second shot to within two feet from the hole – to leave no doubt as to who the man to beat in 2016 is.

Reed, who fired a four-under-par 69, got off to a good start as he made two long birdie putts at the first and second before converting two more at the fifth and ninth.

However, the 25-year-old, who won the event in 2015 after beating Jimmy Walker in a playoff, failed to keep his momentum going in the back nine. A lone birdie at the 16th was cancelled out by a bogey on the previous hole after he missed a seven-foot par putt. The job of catching Spieth appeared all but impossible at the start of the day, and Reed was unable to muster the miracle round that would have seen him challenge the world number one.

Kopeka struggled to remain consistent early on in his round of 71 and started with consecutive bogeys before making a hat-trick of birdies from the third to the fifth. The American could not recover from his up-and-down start, with two further birdies and a bogey forcing him to settle for a distant third.

Snekeder meanwhile began with a bogey at the second before making five birdies over the next seven holes. His fine form continued into the back nine as he recorded two more birdies at the 15th and 18th.

Fowler's final-round flurry was too, little too late, with his round of 67 seeing him finish 10 off the pace. After taking the turn in one-under for the day, Fowler bogeyed the 11th to drop to 15-under for the tournament. However, he then found his rhythm and birdied five of his last six holes to finish on 20-under.

Day ended his tournament on a high after struggling in the first two rounds as he carded an eight-under-par 65, which saw him shoot up 10 places on the leaderboard.

The 2015 PGA Championship winner, who hit a course-record 62 in the final round last year, seemed to be back to his best on Sunday as he started with a birdie at the third before sinking an incredible 75-foot eagle putt two holes later. He followed that up with two more birdies at the sixth and ninth before making three more birdies on the back nine.

Meanwhile, Watson struggled to find his feet on the front nine as he made two birdies and a bogey. However, his fortunes took a turn for the better on the back nine as he made five birdies in a round of six-under-par 67.