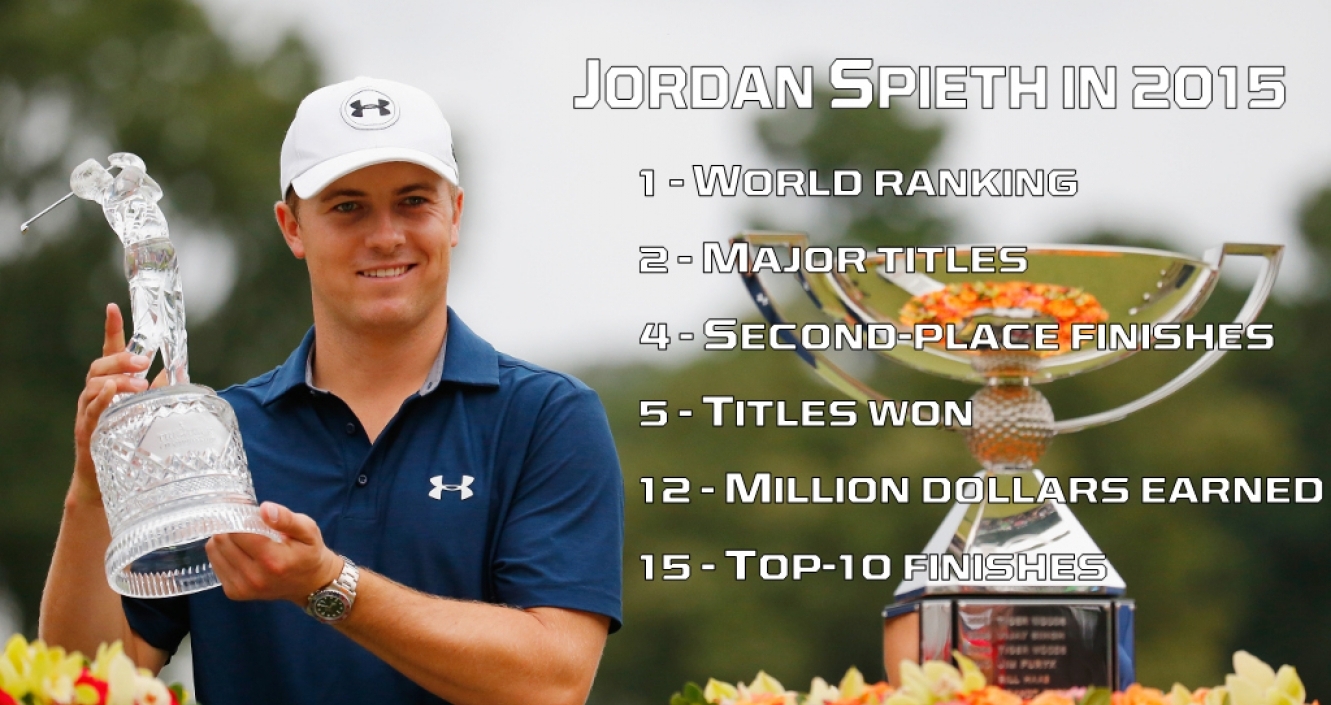 With Jordan Spieth clinching the FedEx Cup – and the world number one ranking – with his victory at the Tour Championship on Sunday, it's a good time to look back at his meteoric rise to the top.

Spieth's five wins in 2015 – which included successive major trophies earlier in the year – have well and truly helped usher in a new era of golf.

As the likes of Tiger Woods and Phil Mickelson – players who for so long were the focus of the golfing world's attention – are increasingly overshadowed by the achievements of a new era of young guns – Spieth, Jason Day, Rory McIlroy and Rickie Fowler – 2016 and beyond looks set to belong to a new generation.

But while all of these golfers have laid down a marker in one way or another – Day in particular in recent months – Spieth's achievements still manage to stand out above the rest, and he almost certainly has the PGA Tour's Player of the Year Award sewn up.

Spieth's remarkable run began in mid-March, only a little more than six months ago, when he won the Valspar Championship following a three-way play-off with Patrick Reed and Sean O'Hair.

There had been performances in the past that signalled his potential – not least of which when he became the fourth youngest winner in PGA Tour history with his victory at the John Deere Classic in July 2013 – but this was the start of something new.

The manner of his victory was also worth of notice – Spieth won on the third extra hole by sinking a 30-foot birdie putt. Looking back now, it was an ominous sign, of his ability to perform under pressure and of his incredible touch around the greens. More than anything – these two attributes have come to define him as a player.

Spieth would elevate himself into the stratosphere with his impressive victory at Augusta in April.

To win the Masters wire-to-wire at 21 is impressive enough, but to do it while setting new 36-hole and 54-hole scoring records, and tying for the overall 72-hole record with a certain Tiger Woods, was something truly special.

He had done all of the really hard work over the first two days with his rounds of 64 and 66, and all that was required from him over the weekend was a steady hand and a good helping of steel and grit.

Spieth had all of that in abundance, and if he ended up coasting home in fairly undramatic fashion, he could hardly be blamed for that.

While his Masters victory was an historic achievement in itself, Spieth was only getting started.

Two months later at Chambers Bay, a British links-style course near Tacoma, Washington, he would capture his second successive major crown with victory at the US Open.

While not as emphatic a performance as the one he managed at Augusta, it hardly mattered.

At the Masters, he soared to a magnificent solo win. This time around, he had to wait with bated breath as Dustin Johnson made the most costly three-putt of his career on the 18th to throw away the championship.

Spieth became only the sixth man in history after Craig Wood, Ben Hogan, Arnold Palmer, Jack Nicklaus and Tiger Woods to win the Masters and US Open in the same year.

What's more, he became the first player since Gene Sarazen in 1922 to win multiple majors aged 21 or younger.

Spieth would keep his foot firmly on the pedal by winning the John Deere Classic in his native Texas for the second time in three years the following month.

He shot the lowest round of his professional career to date – a 61 on Saturday – and would go on to win the tournament in a playoff for his fourth victory of the year.

Following a near miss at the Open Championship, where he finished just one shot out of a playoff, and a second place behind runaway winner Jason Day at the PGA Championship, Spieth missed the cut in The Barclays and at the Deutsche Bank, a rare and uncharacteristic dip in form for the normally rock-solid performer.

It proved to be just a minor blip, however, as Spieth headed out on Sunday and clinched the FedEx Cup with his victory at the season-ending Tour Championship.

Rounds of 68, 66, 68 and 69 proved just too consistent for anyone in the field to match, and he ended up a full four strokes clear when it was all said and done.

Aside from the $10million bonus prize, Spieth also reclaimed the top spot in the world rankings.

All in all, a fitting end to a season that saw the young Texan scale some incredible heights.

Just how much more he will go on to achieve – and to what degree the likes of Day, McIlroy and Fowler can prevent him from doing so – remains to be seen, but one thing seems clear: Jordan Spieth is here to stay.