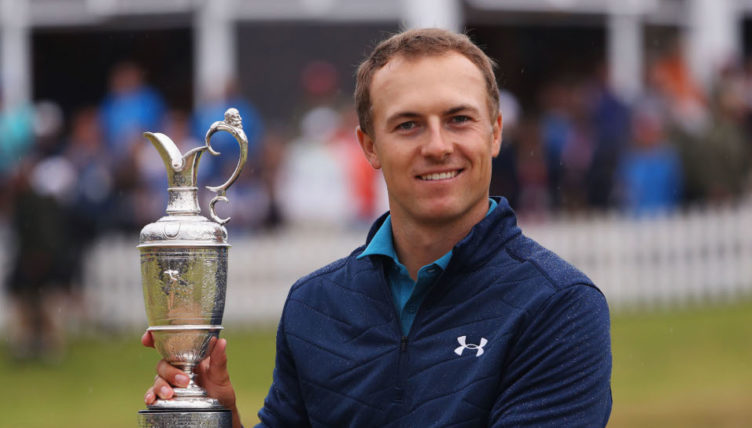 Jordan Spieth recovered from the brink of disaster to pip Matt Kuchar to the claret jug and win the Open Championship.

A final round of 69 saw Spieth finish on 12 under and beat fellow American Kuchar by three shots to lift his third Major.

However, Spieth did it the hard way.

There were plenty of echoes of Spieth’s spectacular 2016 collapse at the Masters after the 23-year-old blew his three-shot overnight lead by the end of the front nine.

Catch up with the highlights of an enthralling Final Round of The 146th Open. #TheOpen pic.twitter.com/ExeMn2KvTv

A three-putt bogey on the ninth saw Spieth drop back to eight under, and he was joined there by Kuchar after the 39-year-old sank a birdie.

The pressure really began to tell on Spieth on the 13th after hitting his drive into an area of rough, surrounded by television trucks. After spending an age discussing where to place his ball for a drop shot with tournament officials, he eventually managed to escape with just a bogey.

If that was rock bottom for Spieth though, he came roaring back on 14 with a birdie to draw level with Kuchar again.

It was the start of a stunning recovery, as Spieth sank an eagle putt at the 15th to take a one shot lead after Kuchar made a birdie himself.

The story of the top two. The drama of #TheOpen. What a show. pic.twitter.com/J2ljmrInvE

After regaining the advantage, Spieth didn’t look back with birdies on 16 and 17 to hold a two-shot lead heading into the last.

Spieth then sank another birdie on the 18th to win the tournament by three shots.

The one that won it. #TheOpen pic.twitter.com/RfrJdByJXP

China’s Li Haotong finished in third spot at six under after a stunning final round of 63 – only the 32nd round of 63 in the history of the majors.

Rory McIlroy and Rafael Cabrera-Bello were joint fourth at five under.