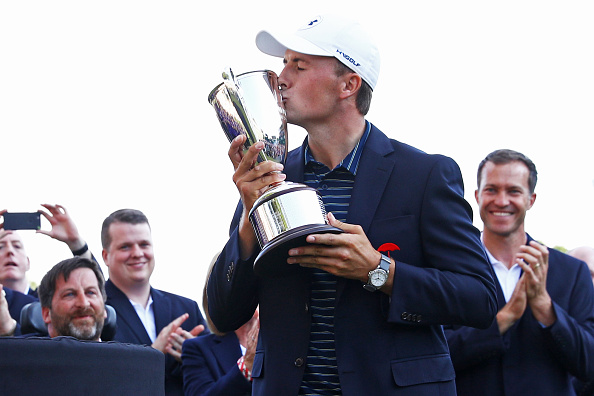 Jordan Spieth won the Travelers Championship on Sunday in a play-off, clinching the title in spectacular fashion as he holed out from a green-side bunker to defeat Daniel Berger at the first extra hole.

Spieth led wire-to-wire at TPC River Highlands, and had led by three strokes early in the final round after birdieing the first two holes.

But his lead slipped away as he carded three bogeys mid round and Berger hit three birdies on the back nine to force the play-off as the two finished tied at 12 under par.

Even after Spieth’s incredible hole out, Berger – a winner at Memphis two weeks ago – narrowly missed a 50-footer from off the green that would have forced a second play-off hole.

The win means Spieth joins Tiger Woods as only the second golfer in the modern era to earn 10 PGA Tour victories before the age of 24. Woods earned 15 wins before his 24th birthday. It was also Spieth’s fourth play-off victory since 2013, the most of anyone on tour.

It also marked the second time Spieth has holed out from a bunker in a such a pressure situation. He previously did so at the 2013 John Deere Classic when he holed out on the final hole to force a three-way play-off, which he then won aged 19 to become the youngest PGA Tour winner in 82 years.