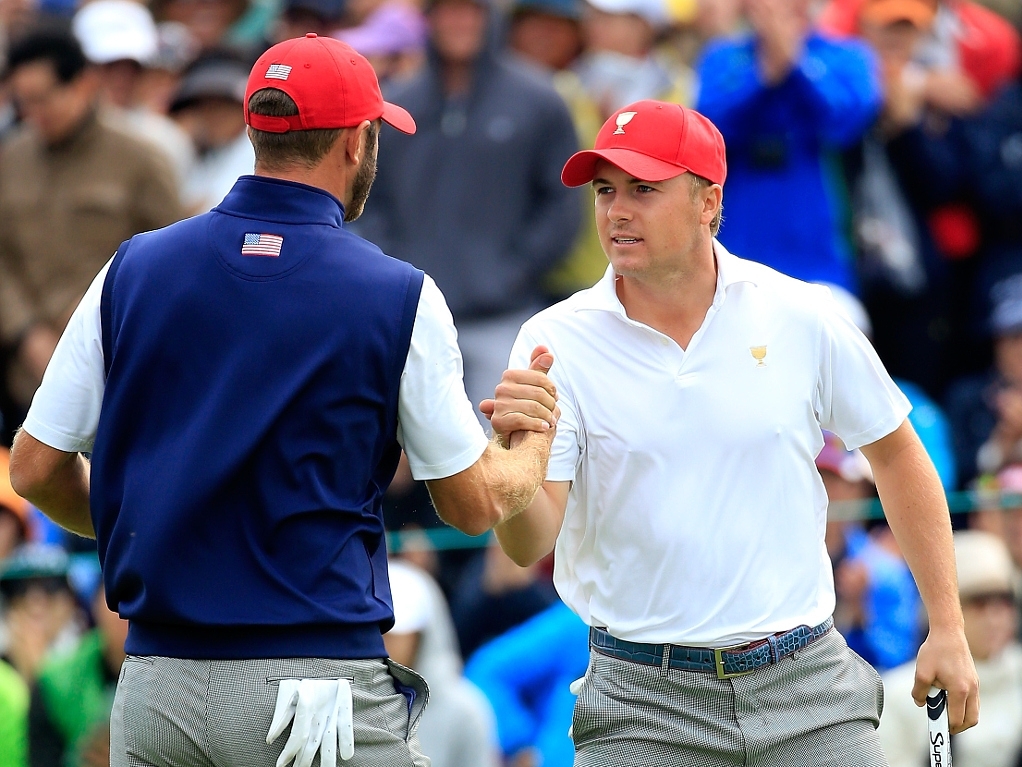 Jordan Spieth holed clutch putts on his final two holes as the US team maintained their one-point advantage in the Presidents Cup following Saturday's morning foursomes.

The world number one and his partner Dustin Johnson were up against Spieth's main rival in the majors this year, Jason Day, and former Masters winner Charl Schwartzel.

As was the case at the 2015 Masters and US Open, it was Spieth who came out on top of the battle against the Australian.

In Saturday's match at the Jack Nicklaus Golf Club in Incheon, Spieth and Johnson found themselves behind after four holes of the tie, three down at the turn and one down with two holes to play.

Spieth, however, showed no sign of nerves and on the 17th rolled in a seven-footer for birdie to level the tie, before repeating the feat at the 18th – this time for par – to win the match for the American team.

That victory proved a crucial one for Jay Haas' team, after the Americans lost one and halved the two other to go into the afternoon fourballs leading 7.5-6.5

Whilst Spieth exuded confidence and calmness during the final minutes of the match, the young Texan admitted afterwards that the opposite was indeed the truth.

"Your blood is running, it's running through your hands. You know it's there," he told reporters in the clubhouse at the Korean course.

"Just looking at the spot just in front of the ball allows me to get over the tension in my hand and make a nice, solid stroke over that point.

"That was a great fight. And it was a huge point in the Presidents Cup."

Earlier, South African pair Branden Grace and Louis Oosthuizen recorded their third win of the week with a 3 & 2 victory over Patrick Reed and Rickie Fowler.

Play was delayed at the start of the day for just over an hour due to overnight rain, but the two South Africans quickly took control of the tie. They birdied the first hole of the tie and were never behind.

The American team could have had an even better morning had Bubba Watson's form on the green been up to scratch during his and J.B. Holmes' match against Adam Scott and Marc Leishman.

Watson, twice a winner at Augusta National, missed a seven-footer for par at the 16th which brought the Internationals level in the tie.

Then, on the final hole, he missed an even shorter putt to win the match, which ultimately brought the International pair level.

Meanwhile, local favourite Bae Sang-Moon was involved in some late drama for the second successive day.

After celebrating wildly on Friday after holing a 12-footer, the Korean and his Japanese partner Hideki Matsuyama came from behind to halve their match against Bill Haas and Matt Kuchar.

"I was thrilled for both of us," said a grateful Matsuyama. "We were one down and somehow we pulled it off."