Spieth having ‘a lot of fun’ 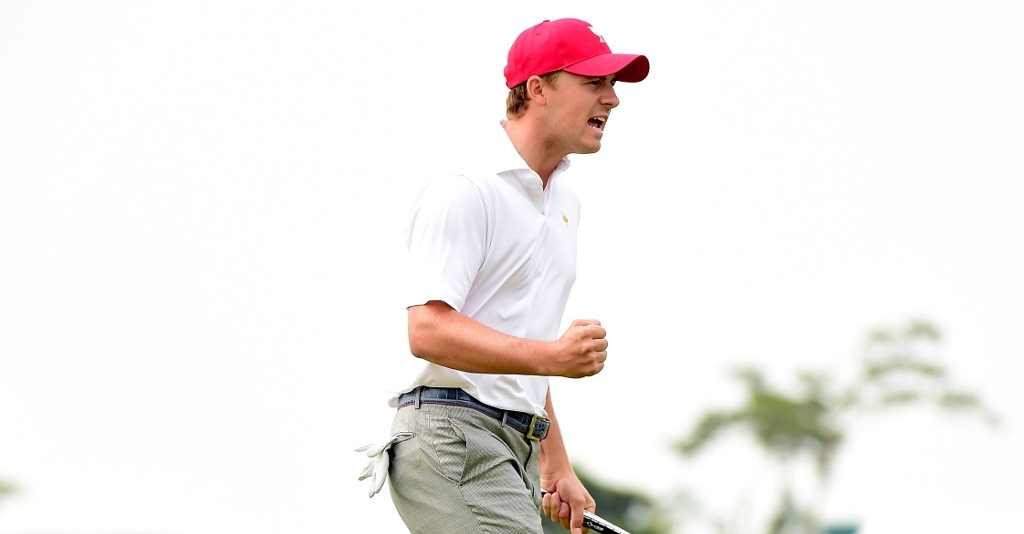 Unsurprisingly, Jordan Spieth is proving to be an influential figure for the US team at the Presidents Cup.

The world number partnered with Patrick Reed in the afternoon fourballs on Saturday as they made eight birdies on the way to a 3&2 victory over world No 2 Jason Day and Charl Schwartzel.

A one-hour delay due to storms at the start of the day meant the match had to be completed in near darkness, but that didn't stop Spieth from sinking putts on the final two holes to complete the win.

Earlier, Spieth partnered Dustin Johnson in the morning foursomes as they came back from 3-down to beat Day and Schwartzel 1-up.

"I had been told earlier on that I was going to team up with my ex-girlfriend here, Patrick, who I had split up with for a little bit," Spieth joked. "I knew that maybe we could get things back on track, and the first couple holes, we couldn't get it to go. And boy, we rattled off a lot of putts. I think we were 9- or 10-under as a group; in this best-ball format, with no bogeys, whenever I made a mistake, he was there; and when he did, I was there.

"That earlier match this morning was unlike any one that I've ever been a part of, where you're down that late and to be able to come back. And then this afternoon was just a lot of fun."

The Internationals are trailing by just one point heading into Sunday's final 12 singles matches, and they largely have Branden Grace and Louis Oosthuizen to thank for that.

The South African duo became the first Presidents Cup partnership ever to win all four of their matches together.

On Saturday, they completed a 3&2 win against Rickie Fowler and Reed in the morning Foursomes before adding a 1-up victory against Bubba Watson and J.B. Holmes.

"I think the team is real excited for tomorrow. It was a great day and we are in a great position," Grace said. "Obviously we would have liked to be square going into tomorrow, but there's a lot of golf still to be played.

"But today was just unbelievable. I think we had a great few days, a great four wins, and we really played some great golf the last couple of days. … Louis stepped in there plenty of times when he had to, and in the afternoon, you know, there's no "I" in a team. We played some great golf. When one was in trouble, the other kicked in. Just a remarkable round of golf."