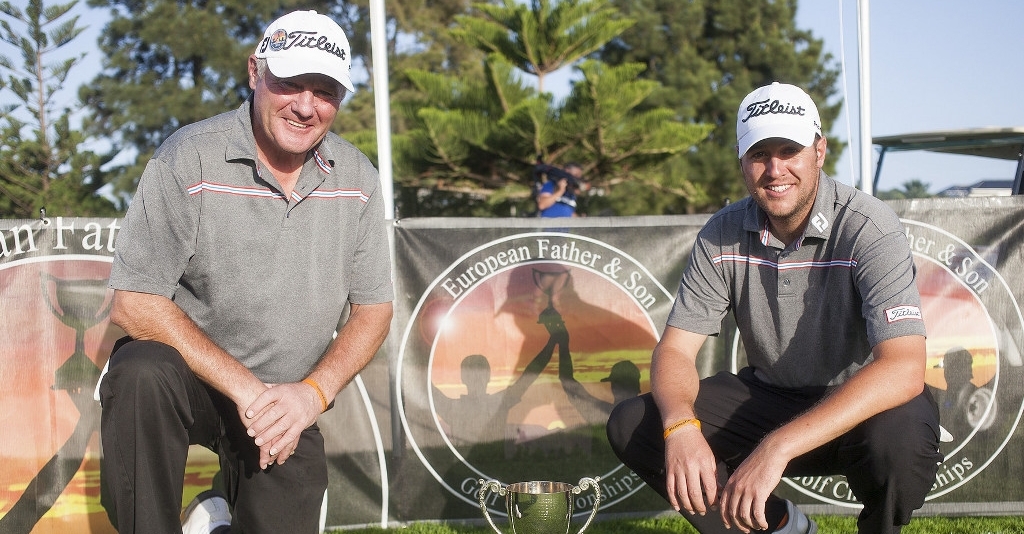 Matthew Southgate took a week out from his breakthrough year on the European Tour to team up with his dad Ian in the 2016 European Father & Son Golf Championships – and three days later the Southend pair were lifting the trophy after a nail-biting finish.

They closed with a 6-under-par 66 for a 54-hole better-ball total of 13-under which left them tied with the overnight leaders Gareth and Charles Bradley (England), plus British teaching professional Gary Milliner and his German-born son Justin.

Southgate has enjoyed an excellent 2016 season, peaking with solo fourth in the Irish Open and T12th in The Open, and the competitive juices were still flowing as he contemplated the first play-off hole.

With his dad making references to aching joints, Southgate Jr was having none of it.

“Matthew turned to me on the tee,” explains Ian, “and he said, 'Come on dad, we've worked hard for three days, we're not here to lose. I don't care how much your legs hurt or your back hurts.' I said, 'Matt, I am trying as hard as I possibly can, if there's anyway we can do this I'll do it.'”

The first extra hole was halved, but on the second Southgate Jr drained an 15-foot birdie putt to clinch the title. The fist pump that had proved popular with the Irish galleries back in May was out in force again.

Back nine on Sunday. pic.twitter.com/LiiGijiExj

“When Matthew was a boy we were on a golf course all the time,” say Ian. “But obviously in recent years we've not played together too much so it was great fun to be out there with him again. In the play-off we hardly looked at each other until the final putt dropped; we wanted it that much. It was lovely, a really lovely experience.”

“I can't believe that me and my dad are European Champions,” says Matthew, who this week starts playing the European Tour's Final Series for the first time. “What a dad, what a legend, what a day. This is such a special event and it means the world to me.”

In all 47 teams from Italy, Germany, Sweden, Denmark, the Czech Republic, Ireland, the UK, the U.S.A. and Australia gathered in Cadiz.

“It's a fantastic event,” says Southgate Sr, “such a fun format and a great bunch of boys who come over from all over the world.

“There are also so many golfers who play father and son golf, but when your son turns pro there's suddenly not many events to play in. That makes it a very special event for those of us with a professional either as dad or son. It's a marvellous opportunity for us to compete together again.”

There was consolation in defeat for the Milliners as they successfully defended their handicap title. Meanwhile 13-year-old Emily Jolly, from Germany, became the first daughter to take part in the championship, competing with her grandfather Peter against her father Andy and brother Miles.

Highlights of this year's tournament will be shown on Sky Sports in November.