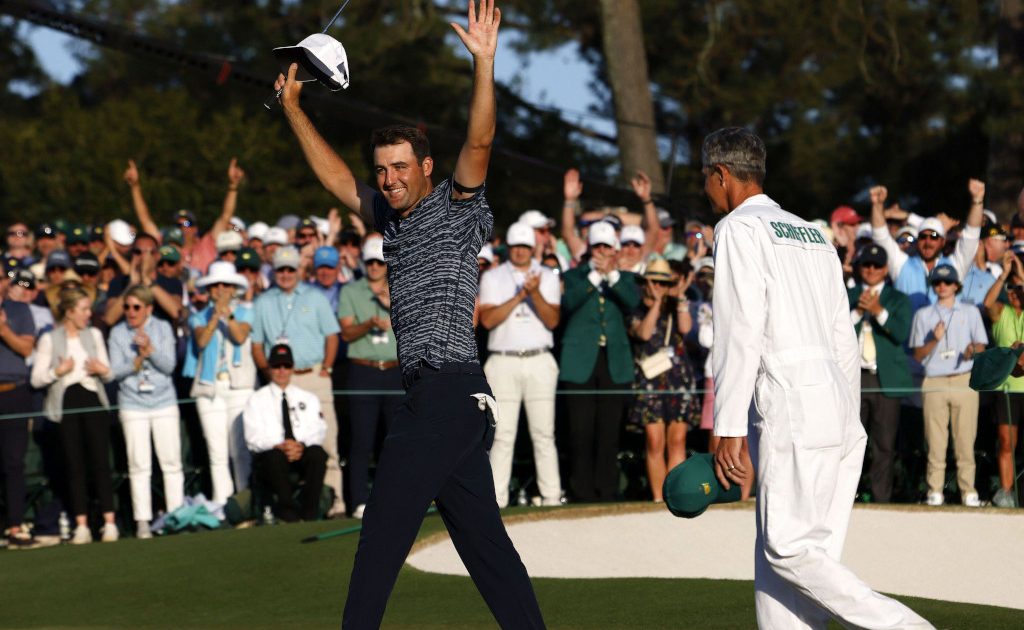 Scottie Scheffler emphatically underlined his status as world number one by claiming his first major title in the 86th Masters at Augusta National.

Scheffler survived early pressure from Cameron Smith and then kept a charging Rory McIlroy at bay to win for a remarkable fourth time in his last six events.

The 25-year-old American suffered the embarrassment of four-putting the 18th, but a closing 71 saw him finish 10 under par and three shots clear of McIlroy, whose stunning 64 equalled the lowest final round in tournament history.

Smith rallied from a devastating triple-bogey on the 12th to finish in a tie for third on five under alongside Ireland’s Shane Lowry, the former Open champion recovering from his own triple bogey on the fourth to return a 69.

Scheffler took a three-shot lead into the final round and, after seeing his advantage cut to a single stroke as Smith birdied the first two holes, chipped in for an unlikely birdie on the third to restore his overnight cushion as Smith bogeyed the same hole.

Smith also dropped a shot on the difficult par-three fourth hole and the gap remained four shots at the turn before the Australian made a superb birdie on the 11th, the most difficult hole on the course.

Bidding to join Tiger Woods as the only players to win the Masters and Players Championship in the same year, Smith’s chances promptly ended when he hit a terrible tee shot on the 12th into Rae’s Creek.

That left an inspired McIlroy alone in second, four shots behind Scheffler, until the Northern Irishman produced a stunning birdie from a greenside bunker on the 18th.

That completed a brilliant 64, just one shot outside the course record and eclipsing McIlroy’s previous lowest score of 65 in the opening round in 2011, when he went on to lead by four shots after 54 holes before slumping to a closing 80.

“This tournament never ceases to amaze and that’s as happy as I’ve ever been on a golf course right there,” an ecstatic McIlroy said. “To play as well as I did and then to finish like this, I mean, it’s just absolutely incredible.”

McIlroy felt his heroics would not be enough with Scheffler sizing up a birdie putt on the 14th as he spoke, the American duly converting there and picking up another shot on the next to effectively seal a commanding victory.

“I gave it a good go and could not ask any more of myself,” added McIlroy, who needs to win the Masters to complete a career grand slam. “I’ll come back and keep trying.”

McIlroy had birdied the first and drove the green on the third to set up another, perhaps fuelled by missing out on the par-five second after hitting a 376-yard drive but then pushing his approach into a bunker.

What a way to finish. McIlroy holes out on No. 18 to put pressure on the leader. #themasters pic.twitter.com/L5fWWbR9cj

The four-time major winner also picked up shots on the seventh and eighth before missing another good chance on the ninth, but swiftly made amends by chipping in from the back of the green on the 10th and also made an eagle on the par-five 13th.

Five-time Masters champion Woods was completing a second straight 78 as the final group got their rounds under way, but admitted just playing this week was one of the greatest achievements of his career following the injuries he suffered in an horrific car crash 14 months ago.

“For not winning an event, yes. Yes, without a doubt,” Woods said.

Woods said he was unsure whether he would play next month’s US PGA Championship at Southern Hills, but that he would contest the 150th Open Championship in July at St Andrews, the scene of two of his Open victories.