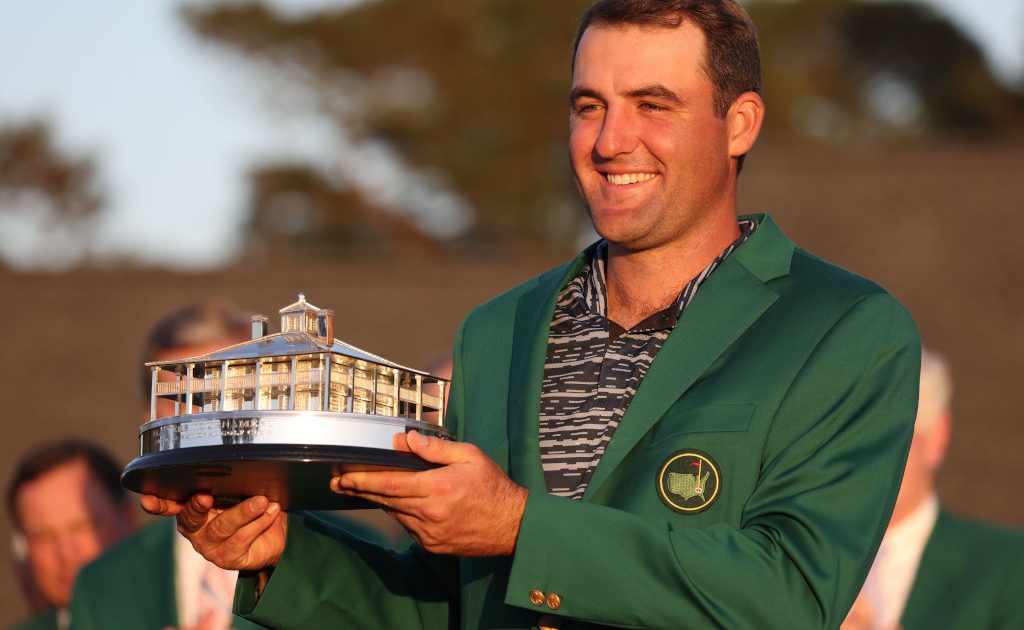 Scottie Scheffler hailed the influence of Tiger Woods after claiming his first major title in impressive style in the 86th Masters at Augusta National.

Woods was completing his second consecutive 78 as the final pairing of Scheffler and Cameron Smith teed off on Sunday, the 46-year-old understandably struggling over the weekend in his first top-level event since suffering severe injuries in a car accident 14 months ago.

The 15-time major winner received a standing ovation as he made his way to the 18th green and his impact on the current generation cannot be underestimated.

“Oh, yeah,” Scheffler said when asked if he had been influenced by Woods. “I played Tiger’s irons, wore his shoes, wore his shirt this week.

“Tiger on the golf course is just ridiculous. He’s done so much for the game of golf. I spoke about it a little bit at the beginning of the week, we are so glad to have him back out here.

“He is the needle for the game of golf. He has completely changed the PGA Tour from when he came on 25 years ago.

“And his YouTube clips are such an inspiration for me. I remember watching the highlights of him winning (the Masters) in ’97, kind of running away with it, and he never really broke his concentration.

“That’s something that I reminded myself of today (Sunday). I tried not to look up. I tried to keep my head down and just keep doing what I was doing because I didn’t want to break my concentration.

“The minute I did was on 18 green when I finally got on there and I had a five-shot lead and was like, all right, now I can enjoy this. And you saw the results of that.”

That was a reference to Scheffler four-putting the 72nd hole, an aberration which meant he recorded a closing 71 to finish 10 under par, three shots ahead of an inspired Rory McIlroy, who equalled the lowest final round in tournament history with a 64.

It was Scheffler’s fourth win in just 57 days, the 25-year-old American claiming his maiden PGA Tour title in Phoenix in February and then adding the Arnold Palmer Invitational and WGC-Dell Technologies Match Play titles to become world number one.

Scheffler was born in New Jersey but raised mainly in Texas, the family moving to Dallas when his mother Diane, chief operating officer of a large law firm, switched jobs.

They quickly decided to join Royal Oaks Country Club, mostly because it meant stay-at-home dad Scott Scheffler could keep all four kids – Scottie has three sisters – in one place.

“It wasn’t unusual for me,” Scheffler said of the arrangement. “I didn’t know any different. Fortunately for me I grew up with three sisters and my dad was there, and he did a great job raising us. Both my parents I think would do anything for any of us.”

It was playing at Royal Oaks which inspired Scheffler to pursue a career in golf, following in the footsteps of fellow members Justin Leonard – the 1997 Open champion – and former PGA Tour player turned commentator Colt Knost.

“I grew up around so many guys out there, just watching them and learning from them,” Scheffler said.

“I wore pants (long trousers) when I was a kid at Royal Oaks because I wanted to play golf on the PGA Tour. I would wear pants and a collared shirt to third grade class and get made fun of – rightfully so.

“I always wanted to be out here and I never expected it. I never expected to be sitting where I am now. You don’t expect things to come to you in this life. You just do the best that you can and with the hand you’re dealt and just go from there.

“I never really thought I was that good at golf, so I just kept practicing and kept working hard, and that’s just what I’m going to keep doing.”