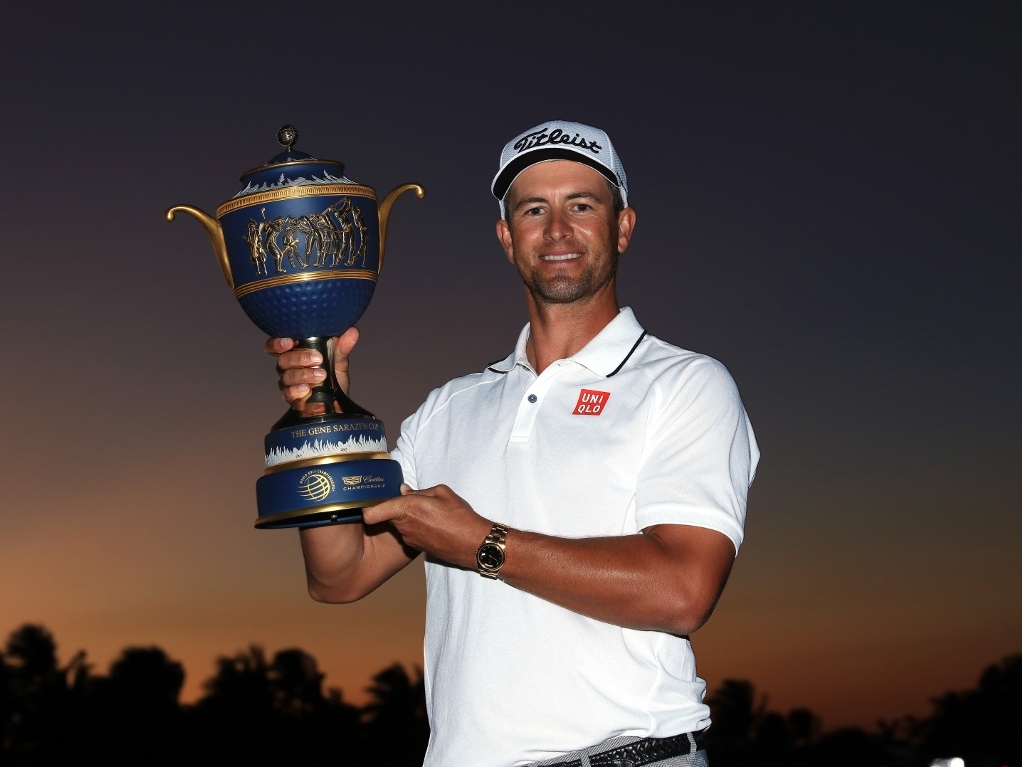 Adam Scott won his second consecutive PGA Tour title after triumphing at the WGC-Cadillac Championship by one stroke on Sunday.

Scott, who carded a three-under-par 69 and finished on 12-under, was three shots behind Rory McIlroy heading into the final round, but took advantage of the Ulsterman’s two-over-par 74 to claim the silverware at Trump National Doral.

Bubba Watson finished in second place on 11-under, with McIlroy in a tie for third with Danny Willett on 10-under. World number one Jordan Spieth had to settle for a tie for 17th on one-under.

Defending champion Dustin Johnson plunged down the leaderboard following a disappointing round of seven-over-par 79.

Scott struggled early on in Florida as he found the water twice to record a pair of double bogeys on his first five holes to trail McIlroy by six shots. However, he bounced back with a pair of birdies to round off the front nine before making three birdies on the trot from the 10th to 12th and picked up a further shot at the 14th.

The Australian flirted with the water hazard once more on the 18th, but was able to get up and down to register a par and avoid a play-off with Watson.

Watson, who fired a four-under-par 68, has now finished second at the WGC-Cadillac Championship four times in the last five years. The world number four began his round with a birdie at the first before he sunk an incredible 61-foot eagle putt at the par-five eighth.

The two-time Masters champion continued to impress on the back nine as he started with a 27-foot birdie putt at the 12th before he recorded a bogey at the 14th after his approach shot landed in the bunker. The bogey proved costly for Watson as Scott birdied the same hole.

McIlroy saw his three-shot lead dissipate on Sunday as a result of the three bogeys and lone birdie he made during his round of 74. Willett maintained his consistent performance throughout the tournament as he hit a 69, which consisted of five birdies and two bogeys.

Spieth’s continued to struggle during the final round as he made four bogeys and three birdies, while world number two Jason Day climbed up seven spots on the leaderboard after making four birdies and three bogeys during his round of 71.

Johnson meanwhile saw his hopes of retaining his title fade away after he registered two birdies, one bogey and four double bogeys on what was a day to forget.