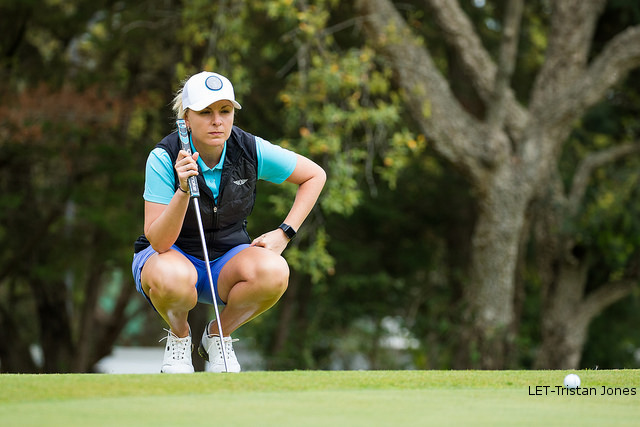 Sarah Kemp and Lynn Carlsson both went sub-70 on Saturday in the Lalla Meryem Cup at Royal Golf Dar Es Salam to take a two-shot advantage into the final round.

Carlsson crafted six birdies in her 4-under-par 68 to set the clubhouse target. Australian Kemp, who carded a 3-under 69, had made just one birdie after 12 holes, but collected four in her next five holes to grab a share of the lead with the Swede on 5-under 211.

Neither player is yet to taste victory on the Ladies European Tour, but 33-year-old Kemp has been getting very close in recent months. She was T3rd in November’s Indian Open and has finished T12th or better in three of her four starts this season, including T5th last time out in the New South Wales Open, to lie tenth in the Order of Merit.

Moreover, she revealed after her round that she and her coach John Serhan had been aiming at this week ever since that top five performance at Coffs Harbour.

“I’ve only got conditional status on the LPGA this year,” she said. “So I’m focussed on the LET, especially because I played well in the Australian events and it’s funny because I really wanted to peak for this week.

“I even played the Symetra Tour a couple of weeks ago and missed the cut, but wasn’t too fussed because this week was what mattered.

“I knew from last year that you need to be strong from the tee and I’m playing so well from the tee currently. If I’ve missed many fairways this week it’s not by far.

“I’ve been surprisingly quite calm. I hope it continues because this is what I play golf for. My goal will be to play one shot at a time.”

23-year-old Carlsson has three top ten finishes in her 31 starts on the LET, but all of them came in her first six starts, the last of those in September 2015.

Her only appearance this year witnessed a missed cut in the South African Open and just two weeks ago she was nursing a bad back whilst playing on the Access Series. She starts the final round on the brink of a career-transforming result.

“I’m very straight from the tee and that really helps this week. I will to stick to my plan tomorrow. It’s worked so far so need to change it.”

Defending champion Klara Spilkova carded a 2-under-par 70 to lie solo third on 3-under 213, with 36-hole co-leader Laura Fuenfstueck a shot further back in fourth.