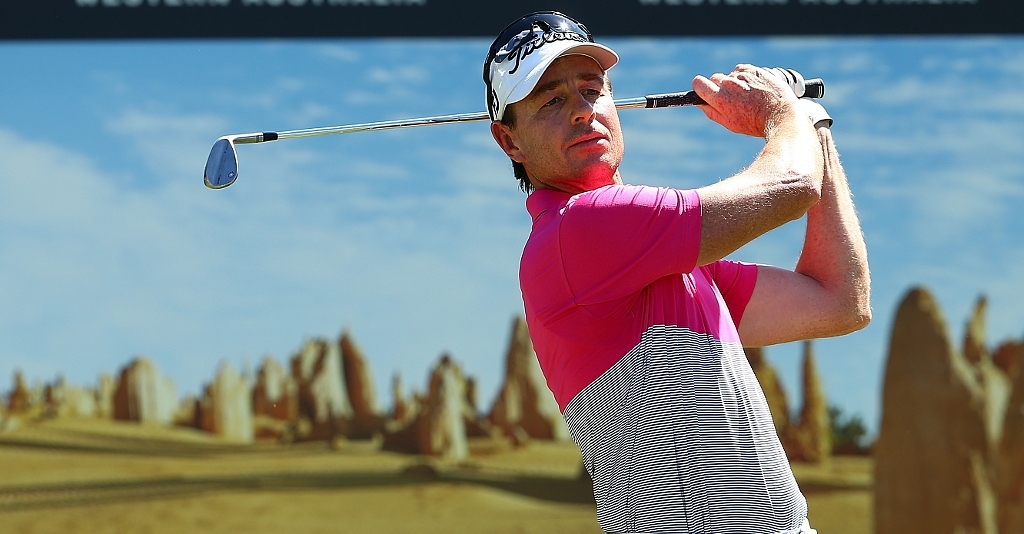 Australia’s Brett Rumford earned his share of the spoils with Peter Uihlein of the United States after posting a second round seven-under-par 65 at the ISPS Handa Perth International on Friday.

The Perth native, who had the local galleries cheering him on at the Lake Karrinyup Country Club, fired himself ahead with eight birdies and a bogey to tie with overnight leader Uihlien who returned with a 68.

Major winner Louis Oosthuizen of South Africa had the chance to snatch a share of the lead with the leading duo but saw his birdie effort on the last sail just short of the hole, leaving him to settle for third place at the A$1.75 million which is seeing the return of the best players from the Asian Tour to Australia after seven years.

Singapore’s Mardan Mamat emerged as the leading player from the Asian Tour after he carded another 69 to secure seventh place, five shots back of the leaders.

On a day where gusty conditions proved to be the key challenge for the field, Rumford credited his battling spirit for keeping him in the title chase.

"It was tough, it was really tough. The wind was fairly benign when we started then it started to pick up from about the 10th which certainly made things interesting on the back nine," said Rumford.

After turning in 31, Rumford birdied 11 but dropped a shot on the next.

A pair of birdies on 14 and 15 would however see him head into the weekend rounds in pole position.

"It was just one of those days where you had to keep grinding, concentration had to be premium, and that's the kind of pressure this golf course puts on you," said the Australian.

Meanwhile Uihlein’s birdie-birdie finish secured his place atop the leaderboard again after he had earlier impressed with an opening 65.

The American mastered the windy conditions again and believes his short game will be key to a grandstand finish this week.

"I'm moving it really well, putting nicely. Putting my irons pretty close as well, which is nice, and hitting my wedges well when I have the opportunity.

"It's nice, I'm just trying to get in a position where I can attack the greens and then hole some putts," said Uihlein.

Oosthuizen, the 2010 Open Championship winner, lived up to his billing as one of the pre-tournament favourites when he made three early birdies in his opening four holes before going on a steady run of seven straight pars.

The South African’s round came to life on 12 after he holed a 10-foot birdie putt there. He picked up further gains on 13 and 14 before taking advantage of the par-five 15th to make it four birdies in a row.

Oosthuizen then sank a 30-foot putt on 17 for another birdie before missing another close birdie call on the last.

"I had a good start today.  I went three-under through four, and then sort of just slowed down quite a bit. The birdie on 12 got me going a bit in the right direction

"I just did what I did yesterday.  I used the same clubs and continued to put myself in positions, and on a few occasions, I just hit it a bit closer.  I read the greens well and putted nicely," said Oosthuizen.

The cut was set at even-par with 74 players progressing into the weekend rounds.

The ISPS Handa Perth International is the only golf tournament in Australia to be tri-sanctioned by the Asian Tour, PGA Tour of Australasia and European Tour.