ROUGH DAY: Phil Mickelson escapes lightning strike and fire to get Twitter telling-off from his sister 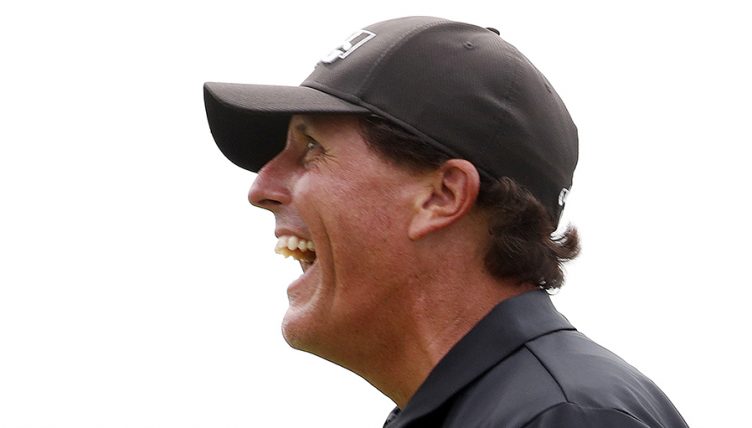 US golf star Phil Mickelson was at the centre of drama over the weekend, as a lightning strike set off a bizarre chain of events that ended in a public telling-off from his sister.

The 49-year-old nearly lost his tee time for the final day’s play of the BMW Championship after lightning struck his hotel near Medinah.

That caused a fire at the hotel, necessitating an evacuation, with just one small problem for Mickelson – all of his gear was still in his room.

Mickelson was due to tee off his final round at 10:52am, but at 9.27am was left tweeting from outside his hotel and opening stressing about whether or not he’d be able to play.

“How’s this for crazy? My hotel was struck by lighting, I was on top floor,we were evacuated and the place is on fire (only thing of mine on fire this week),” Mickelson wrote.

“I can’t get back into my room and may miss my tee time because I am without clubs and clothes.

Luckily, 30 minutes later, Mickelson gave an update, saying that he was going to make it after all.

He did, though, receive a bit of a telling off from his sister Tina – for tweeting about it before telling their mum!

Bro-you can’t tweet this stuff until AFTER you call Mom to tell her you’re ok. 🤦‍♀️😂 Just spoke with her. Btw….call her. She would like ‘a word.’

As it turned out, Mickelson probably thought he’d might as well not have bothered rushing to Medinah in the first place after he shot a disappointing final-round 71.

“Kind of a funny deal,” he said after his round. “There were 10 fire trucks. I got in my car and left and couldn’t get back. The roads were closed and the hotel was closed.

“But things cleared up pretty quickly. I was able to get back in and get my stuff. It all worked out great – except my score.”