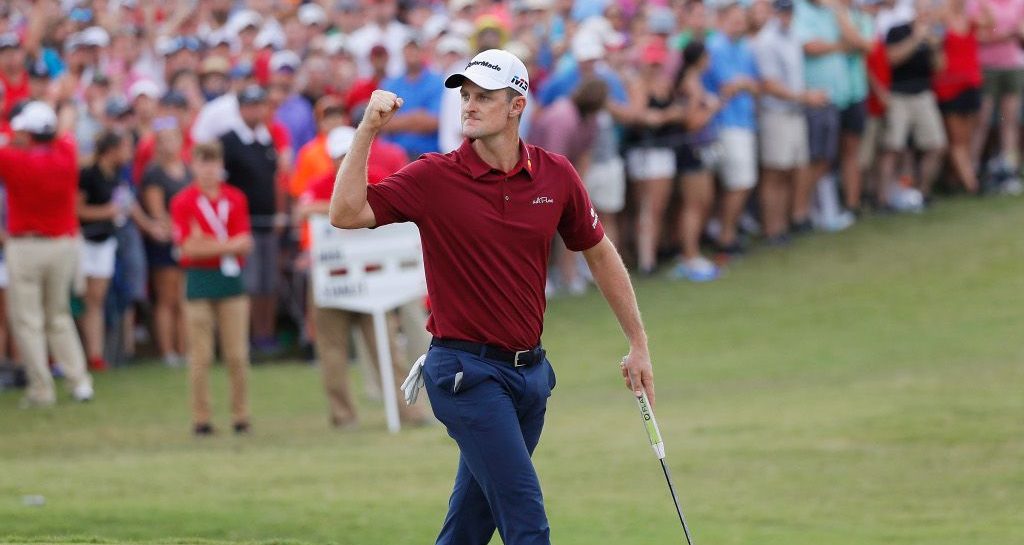 Justin Rose said he was indebted to his “swing of the week” after making a clutch closing birdie to seal the FedExCup in dramatic fashion.

Knowing he needed a fifth place finish or better to secure the big bonus prize, Rose looked to have spoiled his chances as he stumbled badly on the back nine with three bogeys.

That saw him slip into a share of sixth place with two holes remaining, needing a birdie from somewhere to get back in the top five.

Thankfully, he produced a fantastic drive on the par-5 18th to set up a two-putt birdie and deny Tour champion Tiger Woods the double victory.

.@JustinRose99 made his 299th birdie of the season on the 72nd hole to win the #FedExCup. pic.twitter.com/Yl3WOeaos2

“I talked about plan A and plan B [beforehand]. Plan A just never seemed to be that much in my mind – Tiger had a solid start, everyone else was doing nothing [and] some of the chasing pack played well,” Rose told Sky Sports.

“[But] I then started to play well, just one bad swing off the 16th tee – I was in two minds whether to hit driver or three wood, but I guess it boiled down to the 18th.

“I hit the swing of the week off the tee down there and had this jumpy seven iron lie. I obviously caught a break off the top of the bunker and it bobbled onto the green. I was waiting for a break all day. To get it on the last hole was great timing.”

"Never give up on your dreams."@JustinRose99 started his career with 21 missed cuts.

Unfortunately, it was not enough to see Rose retain the World No 1 ranking (that would have required a closing eagle). Dustin Johnson returned to the summit, and the Englishman had to admit that he’d somewhat failed Sunday’s test, a duel with Woods in front of a vociferous and partisan home crowd.

“I felt more pressure as I was throwing it away but then as I got back to what I needed to do from 14th onwards I clicked in and felt really comfortable,” he said.

“But it was a weird scenario when I wasn’t going to win the tournament but I was trying to not throw away the FedExCup. It was a horrible scenario to be playing in. Fortunately I just clicked into gear in the nick of time.

“Obviously we are all delighted for Tiger – these are crazy scenes out there. I am sure over here Stateside I am not the most popular guy for making birdie down the last but he has got enough money!

What a day, what a year #FedExCupChampion 🏆Congratulations @TigerWoods #GOAT on your 8️⃣0️⃣th @PGATOUR title. Thank you #Team🌹for all the support and messages. jR pic.twitter.com/Cu1Wee3ofz

“Guys can have good results and be scratchy doing it but he has looked great all year. It was just a matter of time and I am so happy for him.”

Of course, Rose will have just a few days to recover from all the excitement before the start of the Ryder Cup in Paris later this week.

“Today is going to take a little bit of absorbing and sinking in but I can’t wait to go over to Paris,” he added.

“We are going to need you guys – it is going to be nice to have a role reversal and have the crowds on our side. Can’t wait to get back to get back over and represent Europe in the Ryder Cup.”