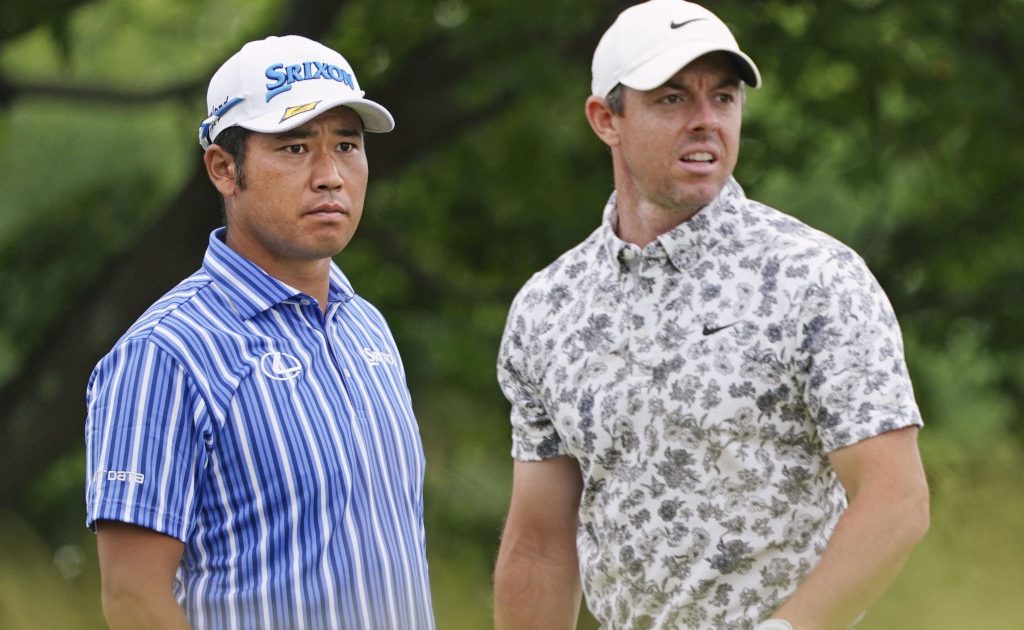 Rory McIlroy made no apologies for showing flashes of frustration even as he made an excellent start to his bid for a fifth major title in the 122nd US Open.

A month after an opening 65 in the US PGA, it was another welcome good start to a major for McIlroy after previous struggles, but it was not without incident as he slammed one club into a bunker and threw another down the fairway on his final hole.

After starting from the 10th, McIlroy had covered his first 13 holes in two under par before a pushed tee shot on the fifth finished in thick rough on the edge of a bunker and left him struggling to take a stance in the sand, with the ball well above his feet.

From there McIlroy could only hack his second shot into another bunker a few yards in front of him, prompting a furious reaction which saw him twice slam his club into the sand.

“You’re going to encounter things at a US Open that you just don’t really encounter any other week,” said McIlroy, whose mood was not helped by the slow pace of the group in front of himself, Hideki Matsuyama and Xander Schauffele.

“It’s hard not to get frustrated because I’m walking up there going like, just come back into the bunker. The thickest rough on the course is around the edges of the bunkers.

“So I was sort of cursing the USGA whenever I was going up to the ball, but it’s one of those things. It happens here, it doesn’t really happen anywhere else. You just have to accept it.

“I gave the sand a couple of whacks because I’d already messed it up, so it wasn’t like it was much more work for Harry (Diamond, his caddie), and then I just reset and played a decent bunker shot, and then it was really nice to hole that (par) putt.”

Having saved par at the fifth, McIlroy birdied the seventh and eighth to take the outright lead, only to drop his only shot of the day on the ninth after missing the green with his approach.

That prompted the club throw and McIlroy added: “The margins are just so fine in this tournament, and I think you can sort of see that out there with some of the reactions.

“Once I played our front nine in two under, the goal was to try to play this round without a bogey. I did that for 17 holes, which was great, and then I was sort of in two minds about what shot to hit on the second shot on nine and missed the green where you just can’t miss it.

“I didn’t do that all day. If I missed it, I missed it in the right spot, played for the fat part of the greens, and that’s why I was frustrated, because you miss it left, it’s a pretty simple up and down. You make par, you move on.

“But it’s fine. It’s something to learn from. (I’m) sitting here talking about the bad stuff when 17 of the holes were really good. I’m happy with the start.”

Tarren, who is ranked 445th in the world, carded an eagle, three birdies and two bogeys in his 67, the 31-year-old from Darlington admitting his presence at the top of the leaderboard had come as a shock.

“I’m kind of pinching myself because I didn’t realise my name was on the top of the leaderboard until I holed that final putt,” Tarren said. “Just excited with my start, and let’s see what the next few days hold.”

Matt Fitzpatrick, who won the 2013 US Amateur at Brookline, carded an opening 68 which was matched by compatriot Justin Rose, while defending champion Jon Rahm birdied the last to complete an eventful 69 which included two young spectators running off with his ball on the 18th.

Phil Mickelson, who has become the figurehead of the controversial Saudi-backed LIV Golf series, did not have much to celebrate on his 52nd birthday as he struggled to a 78 which included a four-putt from 12 feet on the sixth.