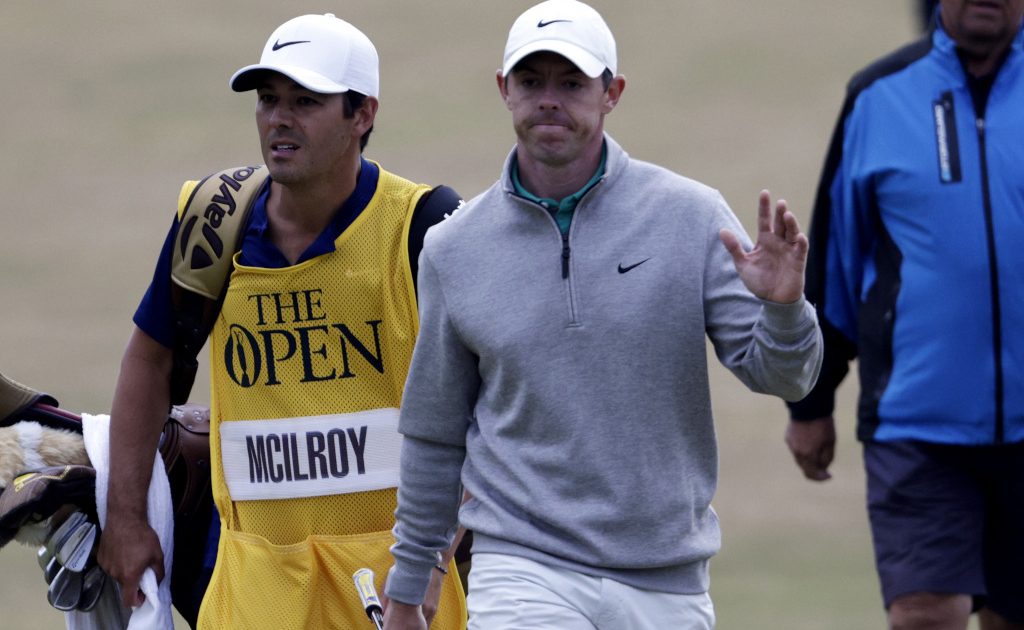 Five days after describing winning the Open on the Old Course as golf’s Holy Grail, Rory McIlroy will take a share of the lead into the final round of the 150th Championship following a stunning Saturday at St Andrews.

Australia’s Cameron Smith had been in pole position to achieve that feat after posting a record halfway total of 13 under par, but the world number six three-putted the opening hole and made a double bogey on the 13th as he slipped off the pace.

Even an error-free front nine of 33 – with birdies on the fifth, sixth and ninth – had seen McIlroy a shot behind an inspired Hovland, who had birdied four holes in a row from the third to take over from Smith at the top of the leaderboard.

However, McIlroy then holed out from a bunker short of the 10th green for a stunning eagle to vault into the lead, before Hovland commendably held his nerve to birdie the same hole.

McIlroy found the green in two on the 614-yard 14th to set up another birdie and move into the outright lead, only to then fire his approach to the daunting 17th over the green and off the wall.

The resulting bogey dropped McIlroy back alongside Hovland, who brilliantly saved par from just over the green, with both players then making a birdie on the last.

Smith and Young will start the final round four shots behind after rounds of 73 and 71 respectively, with world number one Scottie Scheffler and South Korea’s Si Woo Kim a stroke further back.

Two-time major winner Dustin Johnson is six shots back following a 71, with Tommy Fleetwood and US Open winner Matt Fitzpatrick on nine under with Australia’s Adam Scott.

“Today when I was having breakfast it seemed everyone was making birdies everywhere,” Fleetwood said after his 66.

“I got a good start, the middle stretch was frustrating but a good finish again. The putts at 16, 17 (both to save par) and 18 feel crucial. I’d love to be in with a chance coming down the back nine tomorrow, but it is very special to still be in and amongst it.”