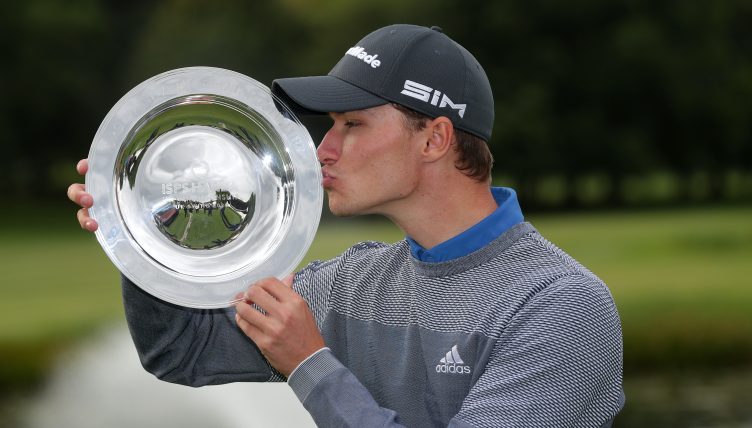 Hojgaard won with a par on the second extra hole at The Belfry after he and overnight leader Walters had finished tied on 14 under par.

The 19-year-old fell two shots off the pace when he bogeyed the 12th, but birdied the 14th and 16th and holed from 10 feet for eagle on the 17th to complete a superb closing 65.

Walters, who began the day with a two-shot lead, ran up a triple-bogey seven on the eighth after hitting his tee shot out of bounds, but recovered superbly and birdied three of the last five holes to force a play-off.

The 39-year-old bravely holed from 10 feet for par on the first extra hole but was unable to repeat the feat from a similar distance at the second time of asking after carving his approach wide of the green from a fairway bunker.

Hojgaard only secured his European Tour card at the qualifying school in November 2019 and won a play-off in the Mauritius Open the following month.

“It’s hard to describe,” Hojgaard said. “It’s obviously an amazing feeling to get the win. It’s happened really quick and I’m kind of lost for words.

“It was a tough day. I was a bit disappointed to make a bogey on 12 and a par on 15, but from there on my goal was just to give myself some good chances coming in and that shot on 17 was quite good and set up an eagle.

“I had 237 metres into the wind so was between a three wood and a hybrid. I went with hybrid trying to hit a low draw and it came out perfect to about 10 feet.”

Hojgaard had already secured his place in the upcoming US Open thanks to finishes of second, sixth and third on the UK Swing and is relishing making his major championship debut at Winged Foot.

“I’m very excited, those are the kind of tournaments you want to play when you are up against the best players in the world,” he added. “I am really looking forward to it.”

Walters, who was chasing his first European Tour title in his 227th start, said: “Obviously it’s disappointing but I’ve only got myself to blame really.

“I hit three bad tee shots in regulation which really cost me but after all that, to birdie three out of my last five holes is good too, so I’ve got to focus on that. It’s a major step forward from what I have been doing and I think the more I put myself in that situation I think I’ll come out on top eventually.”

Former world number one Martin Kaymer, whose last win was the second of his two major titles in the 2014 US Open, had held the outright lead after his third birdie of the day on the 13th.

However, after lipping out for an eagle and tapping in for birdie on the 15th, Kaymer dropped his only shot of the day on the par-five 17th and was unable to hole from 15 feet on the last to join the play-off.

“Unfortunately it was not meant to be today,” said Kaymer, who finished in a tie for third with France’s Benjamin Hebert.

“I was battling all day, made some good putts coming in but that mistake on 17, you can’t make that at the end of a round when you’re trying to win a tournament.”