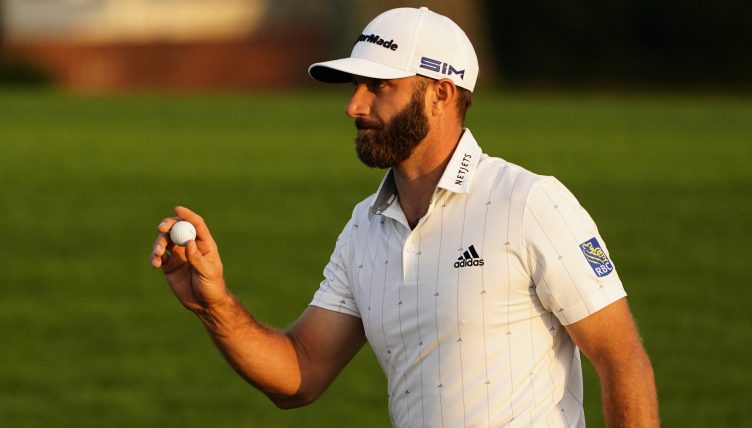 World number one Dustin Johnson will take a commanding lead into the final round of the Masters after producing a record-equalling performance at Augusta National.

Johnson fired an eagle and five birdies in a flawless third round of 65 to finish 16 under par, matching the 54-hole scoring record set by Jordan Spieth in 2015.

Australia’s Cameron Smith, Mexico’s Abraham Ancer and Korea’s Sungjae Im are Johnson’s nearest challengers on 12 under par, with Ancer and Im attempting to become the first players to win the green jacket on their tournament debut since Fuzzy Zoeller in 1979.

Johnson would be the first world number one to win the Masters since Tiger Woods in 2002 but is 0-4 when leading or sharing the lead after 54 holes in a major championship.

The 36-year-old took a three-shot lead into the final round of the US Open at Pebble Beach in 2010 but collapsed to a closing 82, while five years later he three-putted from 12 feet on the 72nd hole at Chambers Bay to finish a shot behind Spieth.

Johnson finally secured his first major title in the 2016 US Open despite being handed a one-shot penalty in the final round, but fell from tied first to eighth at Shinnecock Hills two years later and failed to convert a one-shot lead in August’s US PGA Championship.

“I’ve just got to go out and execute,” Johnson said. “I’ve got a game plan that I’m going to stick to and hopefully I can shoot a nice number.”

The top three players in the world had been part of a tie for the lead for the first time in major championship history after the completion of the delayed second round, with Johnson, Jon Rahm and Justin Thomas joined on nine under par by Ancer and Smith.

With defending champion Tiger Woods and Phil Mickelson just four off the lead and the entire field separated by nine shots, the stage was set for a Saturday shootout and it was an inspired Johnson who came out firing.

After four of his rivals birdied the par-five second to make it an incredible nine-way tie for the lead, Johnson almost holed his second shot to the same hole for an albatross before tapping in for the easiest of eagles.

Johnson also birdied the third, fourth, seventh, 13th and 15th as his biggest rivals faltered. Rahm topped his second shot on the eighth and hit a tree with his next on his way to a double-bogey seven, while Thomas bogeyed three of the last five holes to fall six behind.

“I’ve been playing well and I just needed to get a few putts to drop,” Johnson, who has not finished worse than sixth in his six starts either side of testing positive for Covid-19, added on Sky Sports.

“It was a really good day, I know if I can just get it in the fairway I’m going to give myself a lot of good chances at birdie. There’s so many really good players around the lead I’m going to have to go out and play well if I want to win.

“The game’s in good shape so I’m very confident in what I’m doing so tomorrow hopefully you’ll see a lot of what you did today.”

Rahm’s 72 left him seven shots off the pace, with Rory McIlroy and Tommy Fleetwood another stroke behind following rounds of 67 and 71 respectively.

Former champion Danny Willett and Justin Rose had started the third round alongside Fleetwood on seven under par, but shot 74 and 76 respectively while Woods is five under after a 72.

Sixty players had made the halfway cut on level par, with pre-tournament favourite Bryson DeChambeau surviving by the skin of his teeth after dropping shots on the last two holes in a second round of 74.

The US Open champion said he had been feeling unwell and dizzy during Friday’s play and underwent a Covid-19 test, which came back negative.

“As I kept going through the round I started getting a little dizzy. I don’t know what was going on, a little something weird,” said DeChambeau, who bounced back with a 69 in round three.

“So I got checked for Covid last night and I was fine, nothing. But I had to do the right thing and make sure there was nothing more serious than that.

“I don’t know what it is or what happened, but these past couple days I’ve felt really, really odd and just not 100 per cent. I just feel kind of dull and numb out there, just not fully aware of everything, and making some silly, silly mistakes for sure.”