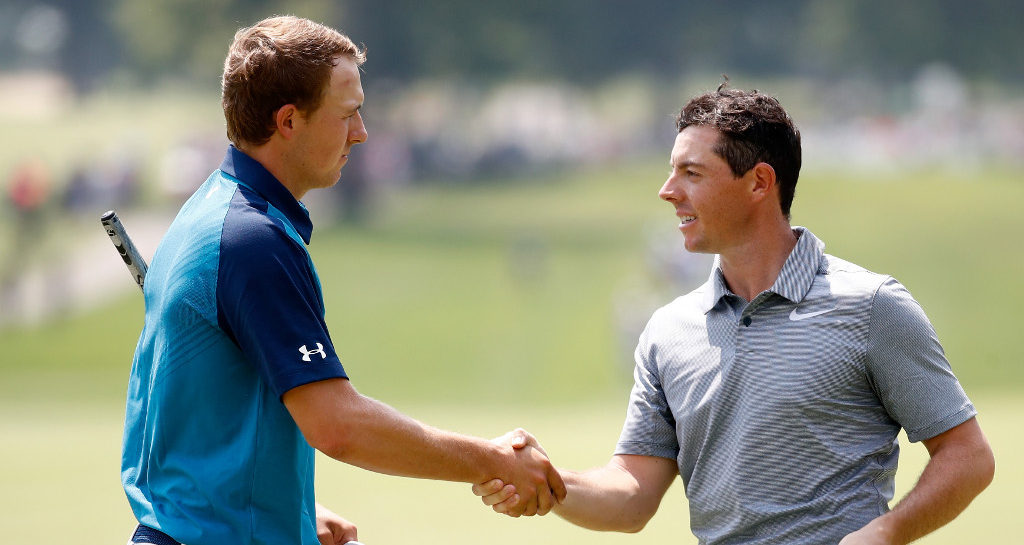 Belgium’s Thomas Pieters holds the early edge at the WGC-Bridgestone Invitational, but a host of big names are lurking just behind.

First-round tee times were brought forward at Firestone Country Club on Thursday due to a forecast of thunderstorms, leading to an early finish for the 76-man field in Akron.

Pieters emerged as the first-round leader courtesy of a well-played five-under-par 65. The three-time European Tour winner from Antwerp made five birdies in a flawless round to lie one shot clear at the top of the leaderboard on five under par.

.@Thomas_Pieters closes with a birdie on his final hole 🇧🇪👋

He is the clubhouse leader at five under. pic.twitter.com/DXjvyyoe8R

In second place a shot back was Scotland’s Russell Knox, whose round featured three birdies, two bogeys and a superb eagle at the par-5 second.

Pieters and Knox may have led the way on the scoreboard, but it’s the star-studded six-man group that follows on three under that will be dominating the headlines.

Open champion Jordan Spieth, his playing partner Rory McIlroy (and his new caddie), exciting newcomer Jon Rahm and two-time Masters champion Bubba Watson are just some of the names who find themselves just two shots back after opening 67s.

The Northern Irishman’s round finished somewhat disappointingly with a three-putt on the ninth, but it was still a satisfying return.

Fans just got an up close look at @McIlroyRory's short game.

Just one shot back. pic.twitter.com/cIjJKJZU7N

“It was good,” McIlroy said.

“It was strange the first couple of holes. It’s different but I stuck to it today, I played pretty well. I guess it’s the start of the next chapter in my career and we’ll go from here.”

Spieth, meanwhile, picked up where he left off at Royal Birkdale with another highly impressive performance.

The American rolled in a 51-footer at the third for one of five birdies on the day, while he also pulled off an audacious shot around the trees after getting himself in trouble at the seventh.

The highlight of Rahm’s round, meanwhile, was an extremely rare eagle at Firestone’s feared 667-yard 16th. The Spaniard became only the second player to eagle the hole since 2008.

Jon Rahm is just the second player to eagle the 16th hole since 2008. pic.twitter.com/1wYn0zSX9k

Meanwhile, World No 1 Dustin Johnson also made a solid start with a two-under-par 68 that leaves him just three shots off Pieters’ lead. Johnson shares ninth place with Adam Scott, Jimmy Walker and Charley Hoffman, among others.

Further down the leaderboard, World No 3 Hideki Matsuyama opening with a one-under 69, while Jason Day, US open champion Brooks Koepka and Open runner-up Matt Kuchar all shot 71.

Masters champ Sergio Garcia, Henrik Stenson and Justin Rose all had to be content with opening 72s.