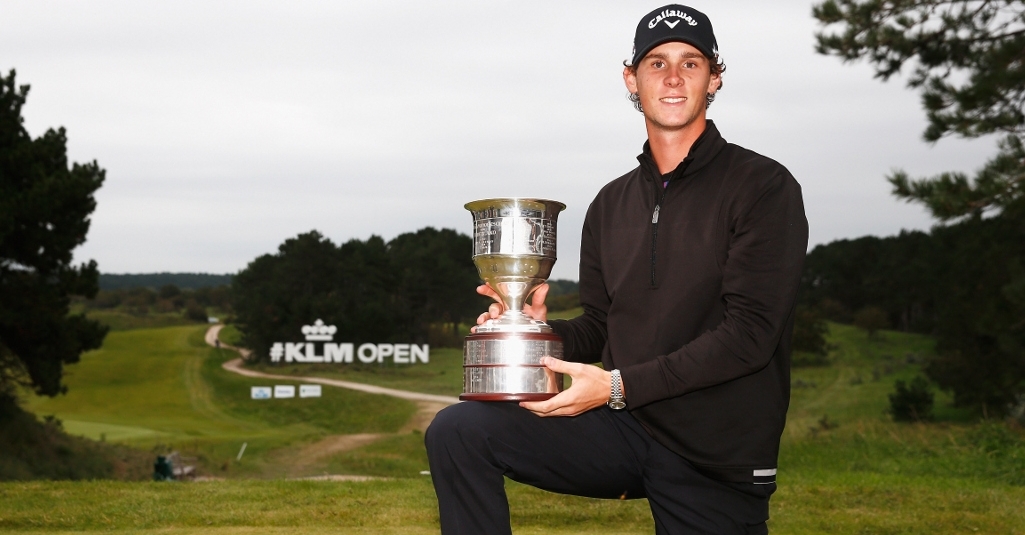 Thomas Pieters edged Lee Slattery to win the KLM Open by a single stroke in the Netherlands on Sunday.

The Belgian's final round, a five under 65, was enough to edge last week's M2M Russian Open winner Slattery by one stroke at Kennemer Golf and Country Club in Zandvoort.

Pieters would have just one blemish on his card, a bogey on the par four eleventh, but he imprssed with six birdies in his round.

Slattery and Pieters spent most of the afternoon trading blows on the greens and after Pieters rolled in a par on the final hole to leave him on 19 under for the event, it was up to the Englishman to match him to secure a playoff.

However, Slattery's second on the 18th was a slight miscue, leading to a 50 foot putt for a birdie and the win. While he judged the pace well, he would miss a five footer for par, handing victory to Pieters.

"I"m a bit surprised," quipped the 23-year-old – who picks up his second win on the European Tour – after the victory.

"Credit to Lee, who played well. I'm really happy with this one, it's even better than this one. My next goal is the third one. I was confident. I teed it up to win and I did it. Next time I'll do the same. I thought a really low one was needed. Missing that one for birdie on the first, I was really nervous. Then I got lucky on the third and kicked on from there.

"It's special winning here, just down the road from home. It was great hearing all the Dutch fans cheering my name and getting behind me, so thanks to them. Our two countries kind of stick together. I'm really happy that my family was here again, too.

"I have to let it sink in now. I would've been really happy just to make it to Dubai this year (for the DP World Tour Championship) but now I’d like to be competing there for the title."

Slattery would end up tied for second place with Spain's Eduardo de la Riva, while Fabrizio Zanotti would finish alone in fourth.