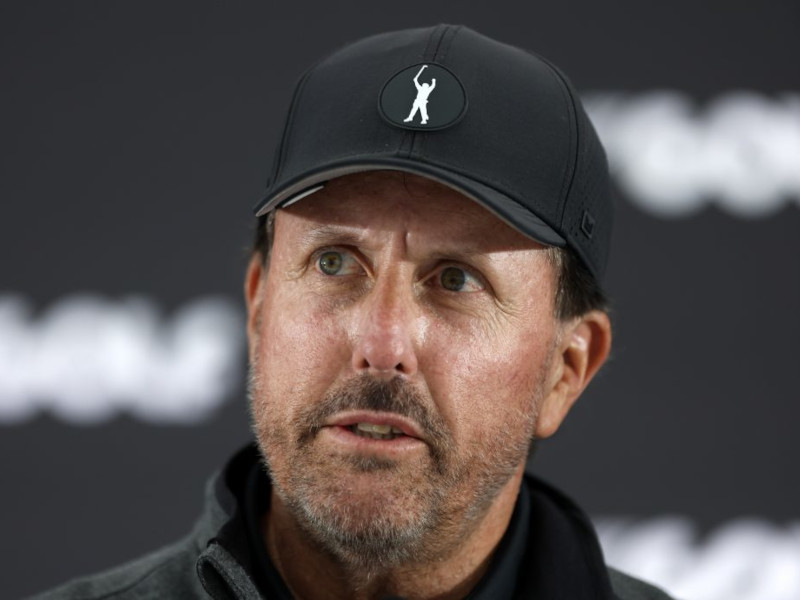 Phil Mickelson has broken his silence on his controversial involvement in the Saudi-backed LIV Golf Invitational Series, but refused to confirm or deny if he has been serving a ban.

Mickelson has not competed since February’s Saudi International, missing the Masters and his title defence in the US PGA Championship following the fallout from his explosive comments about Saudi Arabia and the PGA Tour.

The six-time major winner described the Saudis as “scary m************” and said he was well aware of Saudi Arabia’s “horrible record on human rights” – including the murder of Washington Post reporter Jamal Khashoggi – in an interview with the author of an unauthorised biography.

Yet he added that working with the Saudis was a “once-in-a-lifetime opportunity to reshape how the PGA Tour operates” and also accused the Tour of “obnoxious greed”.

“I choose not to speak publicly on PGA Tour issues at this time,” he said.

Mickelson also declined to confirm if he was receiving USD 200million (GBP 159.5m) to compete in the LIV Golf events, but his answer indicated that the reported amount may well be accurate.

“I feel that contract agreements should be private,” Mickelson added. “Doesn’t seem to be the case, but it should be.”

An unshaven Mickelson was unusually subdued throughout the press conference, often pausing before answering questions and choosing his words carefully.

“I have really enjoyed my time on the PGA Tour,” he said when asked how he ended up representing the people he claimed he was using for “leverage” against the PGA Tour.

“I’ve had some incredible experiences, some great memories and have a lot of strong opinions that should and could be a lot better.

“One of the mistakes I’ve made is voicing those publicly, so I will really make an effort to keep those conversations behind closed doors going forward. I think that’s the way to be the most efficient and get the most out of it.”

While a number of players have resigned from the PGA Tour to compete on the rival circuit, a move which rules two-time major winner Dustin Johnson out of the Ryder Cup, Mickelson has no intention of following suit.

“I’ve been part of the Tour for over 30 years and I’m grateful for everything the Tour and the game of golf has provided for me and my family,” he added.

“I’m hopefully able to be a part of the Ryder Cup going forward but that’s not the reason for me to maintain my membership. It’s because I’ve earned it. I believe all players should have the right to play wherever and whenever they want.”

Mickelson said his lifetime membership of the PGA Tour means he does not have to play the standard 15 events a year to retain his privileges, yet also claimed the LIV Golf Series – eight this year, 10 in 2023 and 14 in 2024 – allows him to “play less and have a better balance in life, on and off the course”.

He added: “I know it gives me a lot of positives personally and professionally and I believe it does the same for everyone else in the field.”

Mickelson was asked several times about Saudi Arabia’s Public Investment Fund being the source of the money behind LIV Golf and the kingdom’s human rights record.

“I don’t condone human rights violations at all,” he said. “I’m certainly aware of what has happened with Jamal Khashoggi and I think it’s terrible.

“Nobody here condones human rights violations and nobody is trying to make up for anything. I don’t know how to say it any more assertively.

“I have also seen the good that the game of golf has done throughout history and I believe LIV Golf is going to do a lot of good for the game as well.”