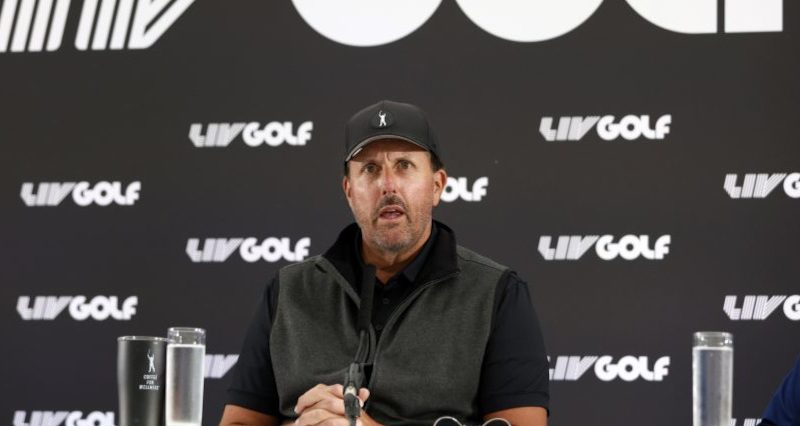 Players competing in the LIV Golf Invitational Series have been suspended by the PGA Tour.

The most lucrative golf tournament in history got under way on Thursday, following a trumpet fanfare and with fighter planes circling overhead.

But 30 minutes after play got under way, the PGA Tour sent a memo to all members informing them that the players competing at Centurion were being suspended.

“In accordance with the PGA Tour’s Tournament Regulations, the players competing this week without releases are suspended or otherwise no longer eligible to participate in PGA Tour tournament play, including the Presidents Cup,” the statement from PGA Tour commissioner Jay Monahan read.

It is a tournament which has thrown the world of men’s professional golf into turmoil, with Johnson resigning from the PGA Tour to take part and Mickelson committing at the last minute for a fee reported to be 200 million (USD).

All 48 players in the field teed off at the same time in a “shotgun start”, the 16 groups of three spread around the course in Hertfordshire.

LIV Golf swiftly hit back with a statement which read: “Today’s announcement by the PGA Tour is vindictive and it deepens the divide between the Tour and its members.

“It’s troubling that the Tour, an organisation dedicated to creating opportunities for golfers to play the game, is the entity blocking golfers from playing.

“This certainly is not the last word on this topic. The era of free agency is beginning as we are proud to have a full field of players joining us in London, and beyond.”

Players who had already resigned from the PGA Tour prior to this announcement included Dustin Johnson, Sergio Garcia, Martin Kaymer, Graeme McDowell and Lee Westwood.

They will be removed from the FedEx Cup points list following the end of the RBC Canadian Open on Sunday and, crucially, will not be allowed to play PGA Tour events as a non-member via sponsor’s exemptions.

“These players have made their choice for their own financial-based reasons,” Monahan added.

“But they can’t demand the same PGA Tour membership benefits, considerations, opportunities and platform as you. That expectation disrespects you, our fans and our partners.”

Addressing the question of whether the 17 suspended players would be able to return to the PGA Tour in the future, Monahan added: “Trust that we’re prepared to deal with those questions and we’ll approach them in the same (way) we have this entire process: by being transparent and respecting the PGA TOUR regulations that you helped establish.

“I am certain our fans and partners – who are surely tired of all this talk of money, money and more money – will continue to be entertained and compelled by the world-class competition you display each and every week, where there are true consequences for every shot you take and your rightful place in history whenever you reach that elusive winner’s circle.

“This week, the RBC Canadian Open is a shining example of what you have created with the PGA TOUR: a star-studded field, a committed sponsor, sold-out hospitality offerings, record crowds and a global broadcast distribution.

“These elements are part of the TOUR’s DNA, built by the likes of Jack (Nicklaus) and Arnie (Palmer), furthered by Tiger (Woods) and countless others – whose legacies are inextricably linked, with each other and with the PGA TOUR. This collective legacy can’t be bought or sold.”

Norman pledged last month he would “defend, reimburse and represent” any players sanctioned and the whole saga has long-since looked destined to end in a legal battle.