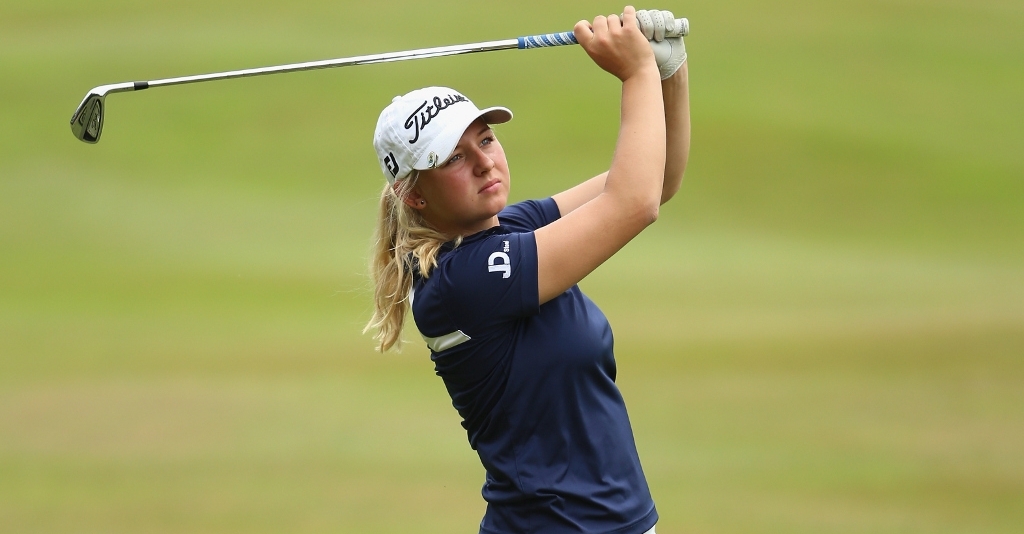 Pedersen, 19, from Smoerum, bogeyed the first and third holes but quickly recovered after finding the speed of the greens at Golf de Chantaco. She picked up her first birdie on the fifth hole and eagled the seventh before making five more birdies at the eighth, 10th, 12th, 15th and 17th.

At nine under par, Pedersen is three strokes ahead of Frenchwoman Celine Herbin, with fellow Dane Malene Jorgensen and first-round leader Gwladys Nocera two strokes behind on four under par.

"After the rough start I was very happy about finishing six under," said Pedersen, who received an invitation to play in the limited field event, featuring 78 players.

"It's given me extra motivation to prove I'm good enough to be here, because I wasn't good enough to get into the tournament. It's a narrow course so you have to be accurate with your irons and shots into the greens."

Pedersen, who finished second at the Deloitte Ladies Open in Holland in May, shortly before finishing her school studies, is one of a new crop of talented Danish players on the Ladies European Tour.

Jorgensen, who finished third behind fellow Dane Nicole Broch Larsen in Helsingborg three weeks ago, recognises that having a group of Danes on tour is helping them to relax off the golf course.

She said: "It's always fun when a lot of people from Denmark are playing well."

Herbin set the clubhouse target earlier in the day with a second round of two under par 68. She made birdies on the par-5 sixth and seventh before dropping shots on the ninth and 11th. She eagled the 15th and immediately double bogeyed the 16th before finishing with birdies on 17 and 18.

"I'm pretty happy with the result," said Herbin, whose caddie is Vicente Ballesteros, the brother of the late Severiano.

"The end of the round was a little up and down. I had a very nice eagle on 15, which was two centimetres from being an albatross, and after I had a double and finished with two birdies. I have a very good feeling for this weekend. My game is in good shape."

The 32-year-old, who lives in Santander, just across the Spanish border, continued: "It's always very nice to play in France instead of wherever in the world and I feel very comfortable here. A lot of people are cheering.

"I was supposed to be playing in a Symetra Tour event this week but I changed my mind to play here. It was a good decision, I think."