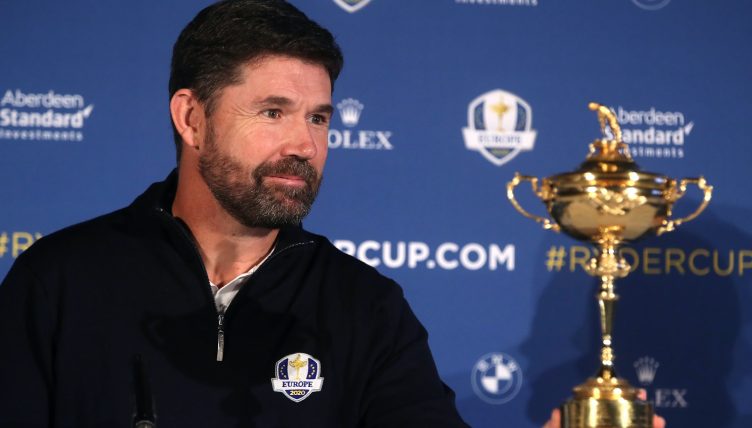 European captain Padraig Harrington believes postponing the Ryder Cup for a year is the correct decision.

The biennial match between the United States and Europe was scheduled to take place at Whistling Straits in Wisconsin from September 25, but organisers have decided they did not want to stage the event without fans in the current coronavirus climate.

It means the competition will now take place between September 24-26, 2021 and every two years thereafter, meaning Rome’s turn to host will now come in 2023.

“Rescheduling the Ryder Cup was never going to be an easy decision given the many factors to take into consideration but I believe it is the right assessment given the unprecedented circumstances we are facing at this time,” said Harrington.

“If that cannot be responsibly recreated at Whistling Straits in September, then it is correct that we all wait until it can be.

“I know, right now, that September 2021 feels like a long time away but it will come around quickly and I guarantee that the European players and I will be ready when it does.”

“It became clear that as of today, our medical experts and the public authorities in Wisconsin could not give us certainty that conducting an event responsibly with thousands of spectators in September would be possible,” he said.

“Given that uncertainty, we knew rescheduling was the right call. As disappointing as this is, our mandate to do all we can to safeguard public health is what matters most.

“The spectators who support both the US and European sides are what make the Ryder Cup such a unique and compelling event and playing without them was not a realistic option.”

Guy Kinnings, Europe’s Ryder Cup director, added: “The Ryder Cup is rightly celebrated as one of the world’s greatest sporting occasions, made special and totally unique in our sport by the fervent atmosphere created by the passionate spectators of both sides.

“While that point is significant, it is not as important as the health of the spectators which, in these difficult times, is always the main consideration.

“We considered all options including playing with a limited attendance but all our stakeholders agreed this would dilute the magic of this great occasion.”

The Ryder Cup’s move to September 24-26, 2021 means the Presidents Cup at Quail Hollow Club in Charlotte, North Carolina, will now be played the following September.

The European Tour has confirmed that the qualification process for Team Europe for the 43rd Ryder Cup has been frozen until the beginning of the new year, with all points earned to date on both the European and World Points lists continuing to count.

Officials are looking into the potential for ‘points multipliers’ to be introduced during the 2021 season to ensure the performances of in-form players are given the relevant importance.

“I think the proposals that have been outlined today are fair to all players involved in the qualification process, whether they have already amassed points or will be looking to do so from next January onwards,” added Harrington.

“The 2020 season has already been heavily disrupted, and may continue to be further impacted, by a number of Covid-19 related issues in terms of travel restrictions, quarantine regulations and individual personal concerns.

“I feel that players should not feel under pressure to play and therefore the points tables should not apply from now until the end of the year from a schedule that could change further.

“However, while that is the case, notable performances will still very much count in my considerations for picks as I maintain a keen interest in the form of all possible Ryder Cup team members in tournaments on both sides of the Atlantic.”