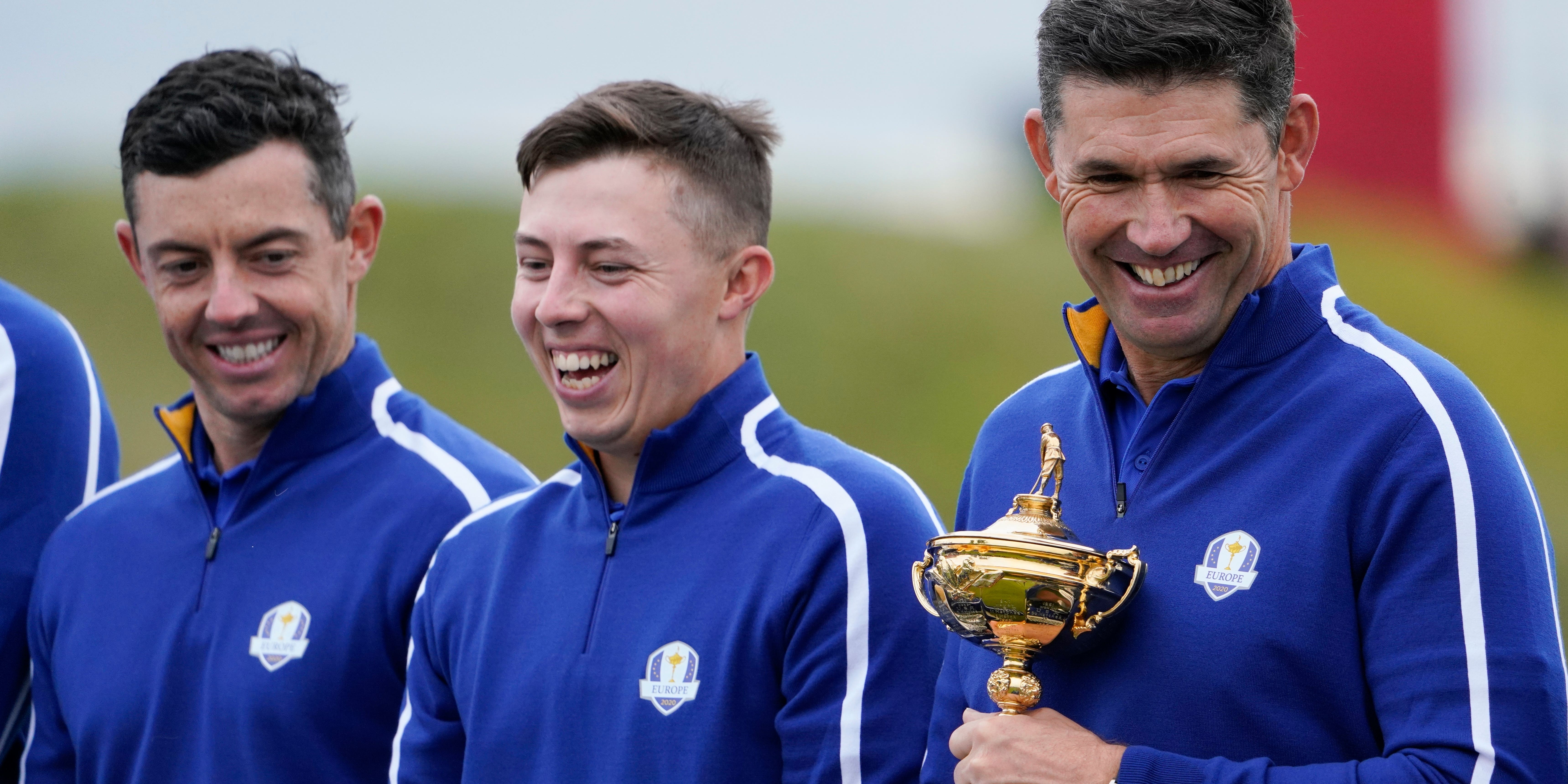 Europe’s players will take inspiration from a stirring reminder of their place in Ryder Cup history as they bid to defy the odds and retain the trophy at Whistling Straits.

The United States are odds-on favourites to continue the dominance of home teams in the biennial contest, with Europe’s ‘Miracle at Medinah’ in 2012 the only away victory in the last seven.

All 12 of Steve Stricker’s side are ranked inside the world’s top 21 and have a record-low average ranking of 8.9, compared to 30.8 for Padraig Harrington‘s European team.

However, Harrington has produced some numbers of his own to help inspire his side to an away win which Rory McIlroy believes would be a “monumental achievement.”

“We have this thing this week where we’ve all been given a player number, so there’s been 164 players that have played for the European Ryder Cup team, or GB&I way back in the day,” McIlroy revealed.

“So that’s a pretty small group of players. I’m number 144, I think Lee (Westwood) is number 118. Bernd Wiesberger, who’s making his debut this year, is number 164.

“It’s a small collection of people that have played for Europe in the Ryder Cup. I think that’s what brings us very close together, and that’s been one of our big focus points this week.

“Just being here is very special and being part of a European team. Very few people can call themselves a European Ryder Cup player.”

Asked if the numbers were Harrington’s idea, McIlroy added: “Yeah. He played a video for us last night to put it into context.

“570 people have been into space. I think over 5,000 people have climbed Everest. 225 have won a men’s major. When you sort of break it down like that it’s a pretty small group and it’s pretty cool.”

McIlroy bore the brunt of the heckling over the first two days of the last Ryder Cup on US soil at Hazeltine in 2016, ultimately having to ask for one man to be removed for being abusive during Saturday’s afternoon fourballs.

And with a similarly hostile atmosphere expected at Whistling Straits, where European support will be minimal due to coronavirus travel restrictions, McIlroy is under no illusions about what it would mean to win on Sunday, with the bookies like Betway offering as low as 1/2 for an American victory.

“It would be massive,” the four-time major winner said. “I think winning any Ryder Cup is huge and it’s a monumental achievement for all that are involved, but I think over the years winning a Ryder Cup on the road has just become more meaningful for some reason.

“We experienced it in 2012, which from a European perspective is probably one of the best days in the Ryder Cup that we’ve ever had in history. I’d certainly love to have that feeling again.

“I think it would be a huge achievement. Obviously this tournament isn’t played on paper, it’s played on grass, but you look at the world rankings and everything, we’re coming in here as underdogs with a lot of things stacked against us, so I think that would make it even more of an achievement.”

McIlroy has played in every session possible since making his debut at Celtic Manor in 2010, where the rejigged schedule caused by bad weather meant he could only play four times.

But after running out of steam during his epic singles clash with Patrick Reed at Hazeltine in 2016 and also losing to Justin Thomas in Paris, the 32-year-old concedes he will need to keep his cool if he plays all five matches once more.

“I certainly will try to not be as animated and I’ll try to conserve some energy,” McIlroy said. “It’s a long week. Whether I play all five again, we’ll see, but it’s a lot of golf.

“It’s a lot of energy just playing, then trying to beat who you’re playing against. If you try to beat the crowd, as well, it seems like a bit of an impossible task.

“I will try my best for this team and I’ll try to play the best golf I possibly can, but I sort of learned quite a few things from 2016 about conserving energy. I felt like I sort of hit a wall on the back nine against Patrick that day, and I want to make sure that that doesn’t happen again.

“I think the most animated I’ve been in my career has been at Ryder Cups. It just brings something out of you that you don’t get playing individually.

“There’s something more there when you’re playing as part of a team, and everything you do doesn’t just affect yourself but affects the other 11 players, the captain, the vice-captains, all the support team.

“There’s a lot of emotion that comes out, but you still have to try to control that, as well.”