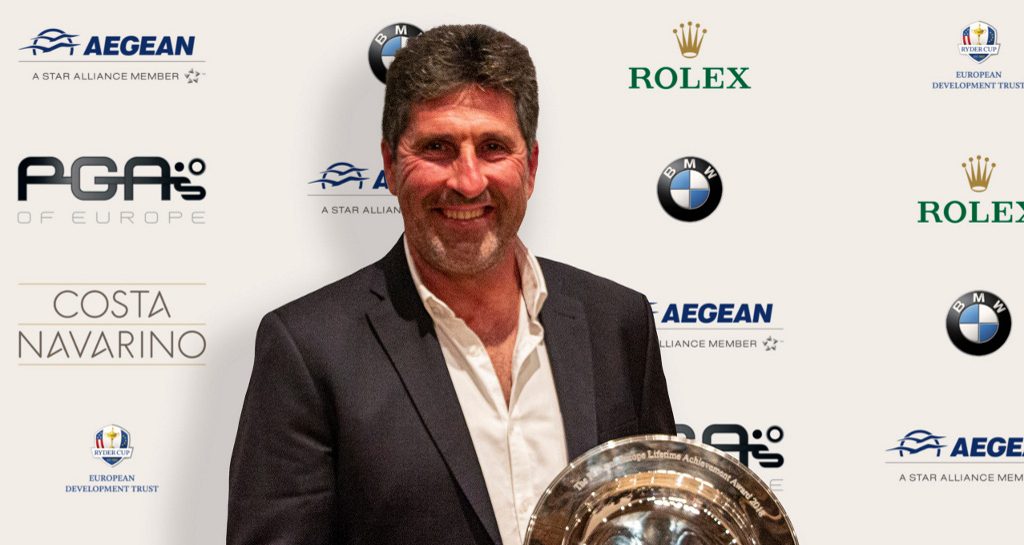 Olazábal won the award in recognition of his outstanding achievements and contribution to golf across his career, becoming a recognised ambassador for golf in his native country of Spain, in Europe and across the world.

“It is a true honour for me to receive this award, especially coming from the PGAs of Europe,” said Olazábal. The award was presented as part of the 2018 Annual Congress Gala Awards Supported By Rolex at Costa Navarino in Greece, and given to him at a hugely well-received Q&A session with PGAs of Europe Board Director, Ken Schofield.

“I am humbled by this experience – all I tried to do in my career was to play golf the best I could, to respect the rules of golf, my peers, and my opponents, and to be fair and honest – and hopefully this was the result of that.”

The Spaniard is widely known for his major victories, Professional wins around the world, as well as for his incredible Ryder Cup record as a player, with the most successful pairs partnership with friend Seve Ballesteros, and his captaincy of the ‘Miracle at Medinah’ in 2012.

His golf career began at a young age in northern Spain where his father, a greenkeeper at Real Golf Club de San Sebastian, taught him to play with a cut down three-iron. He went on to win The Amateur Championship at the age of 18, and then turned professional on the European Tour earning the Sir Henry Cotton Rookie of the Year award in 1986 after finishing second in the order of merit.

Olazábal formed part of a generation of golfers that made an impact not only in Europe but also in the United States, and his consistent finishes spanning a decade ensured he was in the world top-10 for over 300 weeks between 1989 and 1995.

This was helped in part by his break-through major win at The Masters in 1994, becoming the sixth European to win the tournament in seven years. 1999 saw him repeat his victory at Augusta National, securing his place in a list of legends who have multiple Masters wins and major victories, as well as a further 21 European Tour wins, four PGA Tour wins and a place in the World Golf Hall of Fame.

“As a golf player I believe that winning major events is key for us,” said Olazábal. “Those are the ones that determine your career and, in that regard, obviously those are my most important, or highest achievements as a player.

“But I cannot forget the special moments in my career, being Ryder Cup Captain in 2012 was the happiest and most special – it was the first time Seve wasn’t with us and being able to really feel the joy of so many people, the spectators, family members, the team with their wives and girlfriends, children, parents…that is the beauty of the event. I think it reached a lot of people and that is why it is so special to me.”

This Ryder Cup role is what Olazábal is perhaps most known for – as a player he formed one half of the ‘Spanish Armada’ with Ballesteros, the most successful Ryder Cup pairing in history with 12 points from 15 matches together. Olazábal played in seven Ryder Cups between 1987 and 2006, and was victorious in ’87, ’97 and ’06 with a total of 20.5 points to his name; the seventh highest points tally in the European Team’s history.

Having become a Ryder Cup legend, his experience and knowledge has proven to be hugely valuable as he took the role of Vice Captain for three matches in ’08, ’10 and ’14, was also the orchestrator of the previously mentioned ‘Miracle at Medinah’ in 2012 as European Captain, producing one of the greatest comebacks not only in golf, but in all of sport.

Many forget, however, that Olazábal’s career has been one that often saw triumph overcome adversity. On multiple occasions his determination and attitude were relied upon to pull him through difficult times of injury.

Notably in 1995/96 when intense pain in his feet caused by back problems meant he thought he may never compete at a high level again, making his green jacket win in 1999 and return to the top of the sport even more impressive.

“Unfortunately, I had to go through tough times with my health,” added Olazábal. “I had some serious physical issues from playing golf, but not just that – I was in such pain I could not walk for weeks and could not do anything at all…at one point I thought my career was over.

“That puts things in perspective, when you overcome a situation like that…you see not so much the game in a different way, but from a different perspective, you realise golf is not everything. There are other things in life, friendship, family…sometimes even when you are on the golf course and things don’t go your way there is a split second where you go back and say ‘yes I made a double-bogey but there are worse things’.”

Competitive golf has not left the Spaniard just yet with aims to play on the Champions Tour in the USA in the future, as well as continue to play in European Tour events. Off the course the Olazábal Design business continues to grow, now with the inclusion of the latest two golf courses at Costa Navarino:

“In Costa Navarino we are in a very special place and the Navarino Hills site is beautiful with wonderful scenery of the Bay of Navarino and the mountains, it will be a fantastic place to come and play golf. When you design a course, you want people to have fun and enjoy it, all whilst challenging them, and the feedback is very important from the people that play them – if they are happy then I am happy.”