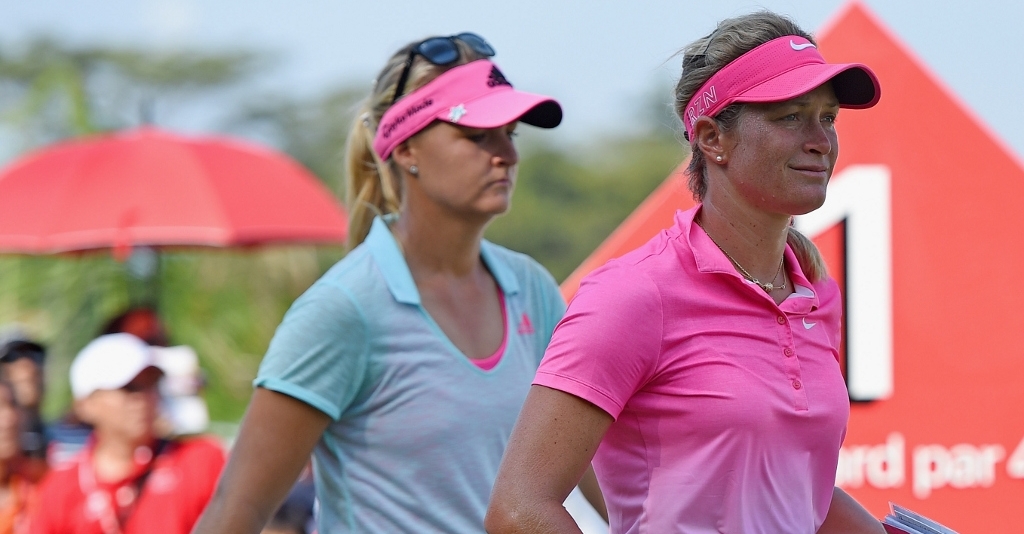 Anna Nordqvist and Suzann Pettersen will be hoping history repeats itself when they lead out Europe in the opening Solheim Cup foursomes at St Leon-Rot.

The Scandinavian duo beat Stacy Lewis and Lizette Salas 5 & 4 in the opening match two years ago and they are determined to kick start their team’s effort in a similar fashion by beating Morgan Pressel and Paula Creamer in the first match on the course this year.

Nordvist and Pettersen are the highest-placed European players on the Rolex Women’s World Ranking and so were obvious choices to lead their team out in the first Solheim Cup match to be held in Germany.

“I just wanted a strong team to go out first,” confirmed European captain, Carin Koch, after she and her US counterpart Juli Inkster had announced the pairing at the official Opening Ceremony held in the Oktoberfest tent.

“They have played together before and they like to play together. It was a nice pairing to put on the first tee. I think it will be quite loud on the first tee so it nice to have a couple of experienced players to enjoy that moment.”

The foursomes go out in fifteen minute intervals and next on the course for Europe are England’s Charley Hull and Mel Reid who will be up against Michelle Wie and Brittany Lincicome.

“I knew Charley and Mel would both like to play together and watching them in practice I’ve seen they have a lot of fun together,” said Koch. “They have personalities that go together and so do their games. It was an easy one for me.”

Karine Icher and Azahara Munoz also claimed a point in the first foursomes two years ago in the States and that partnership will be renewed in the third match against Cristie Kerr and Lexi Thomson. The fourth match will see German, Sandra Gal, team up with experienced Scot, Catriona Matthew, for a match against Lewis and Salas.

It emerged during the Captain’s press conference that Inkster had hoped to pair Wie alongside Alison Lee but saw her plans scuppered when the American rookie came down with sickness.

“I did expect to put her (Lee) out but she’s still sick,” confirmed Inkster. “She just can’t shake a stomach bug. They gave her an IV of fluids today so we will see how it goes. She’s already missed the Gala Dinner and she was really looking forward to that.

“It’s definitely a disruption but you just have to go with it,” added the American captain. “There are a lot of teams that have been a man down and been successful.

“She’s young. I hope she bounces back but I don’t want her “heave-hoing” on the golf course. I’ve done that and it’s not fun.”

Inkster went on to say she would introduce Lee as soon as she felt she had recovered for her illness. The Captain’s Agreement stipulates that every player must play in at least one match over the first two days of the competition unless the player is unable to play on Friday and/or Saturday due to injury, illness or personal bereavement.

The two captains went on to confirm both their teams were ready for the start of the 14th playing of the Solheim Cup.

“They’re ready. They have been for a while,” said Koch, who is bidding to become the third successful winning European captain in-a-row. “Today turned out to be a nice day for us. It was wet but we all went out to play a few holes and had some fun. We tried some pairings we wanted to see together. It was very positive.”
Inkster also revealed her team were champing at the bit to reverse the last two defeats.

“My team is also ready to go,” she confirmed. “I think they were probably ready to go on Monday but we’ve had to wait a little bit. This week has been great. The weather has put a little damper on the golf but the other parts have been extraordinary. Hopefully, the rain will let up and we’ll get three nice days of golf.

“I don’t think I have to stoke any fire with them,” she added. “They’re all competitive golfers. They’re all professionals. If they weren’t, they would be in this sport.

“This is a match between the Europeans and the United States. It’s a game of sportsmanship and integrity. We’re just going to go out there, play some golf, have some fun and see what happens.”