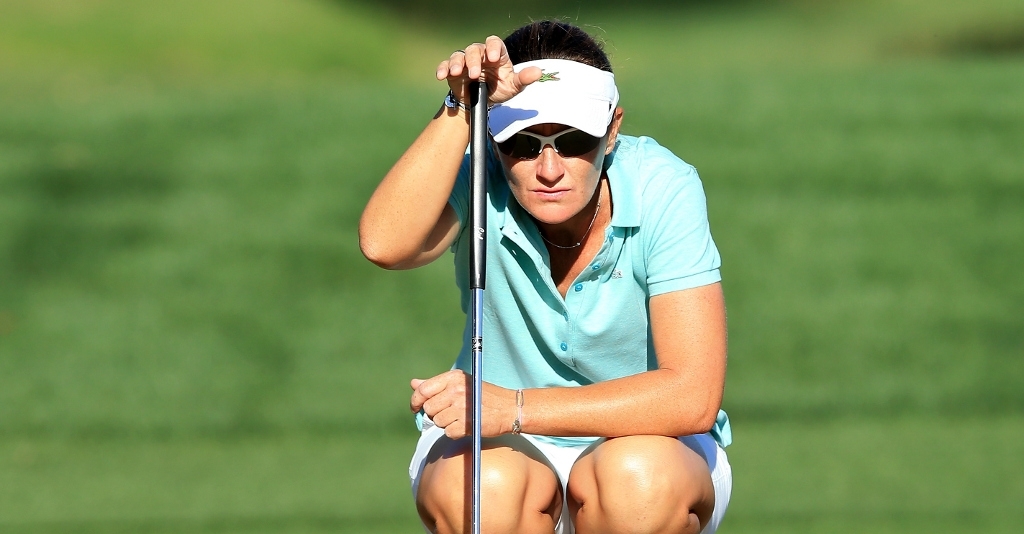 European Solheim Cup player Gwladys Nocera thrilled the home galleries with a fantastic five-under-par 65 to lead after the first round of the Lacoste Ladies Open de France.

In fine conditions, Nocera fired five birdies to end a stroke ahead of fellow Frenchwoman Celine Herbin at Golf de Chantaco, a scenic course located between The Rhûne Mountain and the Atlantic coast in Saint-Jean-de-Luz, Aquitaine.

“I started the day a little bit slow and after a couple of holes I told myself, you decided to come here, you’ve always wanted to win this tournament, so get your act together and play golf,” said Nocera, 40, who played in the Evian Championship and then The Solheim Cup in Germany last week. “Sometimes after two tough weeks like we went through, it’s easy not to give everything you have because you’re tired, but I really want to win this tournament and I think in the back of my head it hit me. I kept on playing better and made a few putts, so it’s really nice to end the day like that.”

European Solheim Cup team member Azahara Munoz from Spain is seeking to become the first player to win the Open de France three times in succession and lies in a group sharing seventh place on two under par 68, alongside her English teammate Charley Hull.

Fellow Spanish Solheim Cup player Carlota Ciganda was four under through 17 holes but made a quadruple bogey eight on the last after twice shanking the ball out of bounds and she signed for a level par 70. United States Solheim Cup winner Cristie Kerr struggled to a four over par 74 after recording two double bogeys on the back nine, on 11 and 18.

However, Fiona Puyo from France was all smiles after a hole in one at the 141-yard 12th using her 8-iron. After signing for a two over par 72, she said: “I didn't see the ball go in, because the green is uphill, but I heard the cheers from the crowd and I knew the ball went in! I was told it pitched two yards behind the pin and came back in with the spin. It's my second hole-in-one: I made one during the 2011 French match play championship when I was still an amateur. So it's my first one as a pro."

The Lacoste Ladies Open de France continues on Friday, followed by a cut to the leading 50 players and those tied after the second round.