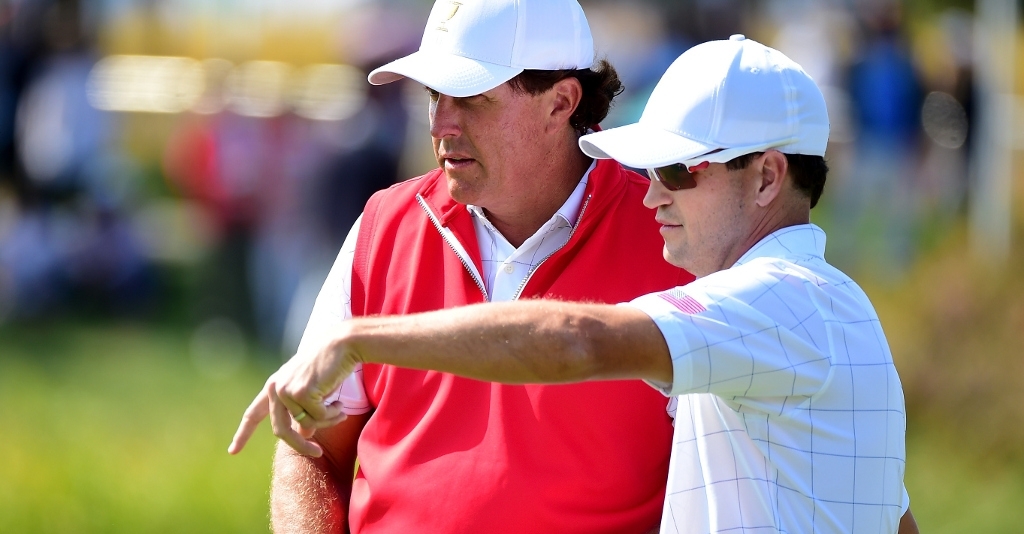 Mickelson's disappointing form in 2015 led some to question US captain Haas' decision to include the 45-year-old in his Presidents Cup team, but that decision paid off on Thursday as Mickelson teamed with Zach Johnson to take down red-hot world number two Jason day and Steven Bowditch with a 2-up victory.

The USA now enjoy a mroe than healthy 4-1 lead over the Internationals after day one.

Highlights for Mickelson included a holed bunker shot from 20 feet on the 13th hole at a time when he and Johnson were protecting a 1-up lead.

“This is the most fun we have all year, and to spend and share time with each other, to play with each other, it's just so enjoyable and I'm so appreciative to be on this team, to be a part of the team and now to be contributing with the points,” said Mickelson.

Mickelson enjoyed being partnered with Johnson for the first time in their Match Play history.

“The thing about Zach and I is we actually can play our best and get other people to play their best with a number of guys on the team now and in the past. For the better of the team, we have played with other partners to bring out the best in them and the best in us, but together, we were also able to play some of our best golf, and I think that we are going to get even better as the week goes on as we spend more time with each other.”

Johnson was similarly complimentary of Mickelson and their partnership.

“Phil is a different guy, too, and that's the beauty,” Johnson said. “I love his energy. I've always enjoyed just playing with him, regardless of the format, of the tournament, of the situation.

“Phil can be a pretty energetic guy. The beauty of it is what you see is what you get. His emotions are on his sleeve and that's why he is who he is and what he's done. He's one of our leaders and one of the leaders, best leaders I've been around. … And he’s the best I’ve ever seen around the greens. Put that with how he can drive the ball, it’s scary. And good to be a part of.”

As for the rest of the team, everyone seems to be appreciative of having Mickelson around, not just for his play on the course, but for what he adds behind the scenes.

“Phil is awesome to be around,” said Rickie Fowler. “He's someone I've looked up to. … He's got a little bit of everything. He can be serious when it needs to be done and he can step up and put a speech together, talk to the guys, get you motivated and pumped up. He can also be there to pick guys up, be helpful. I say big brother, but I make reference, he's like a dad to me. He doesn't like that reference because it makes him sound older. He is playing, but it's almost like he's in a captain role in a way."