Mickelson and Els to play in their 100th major 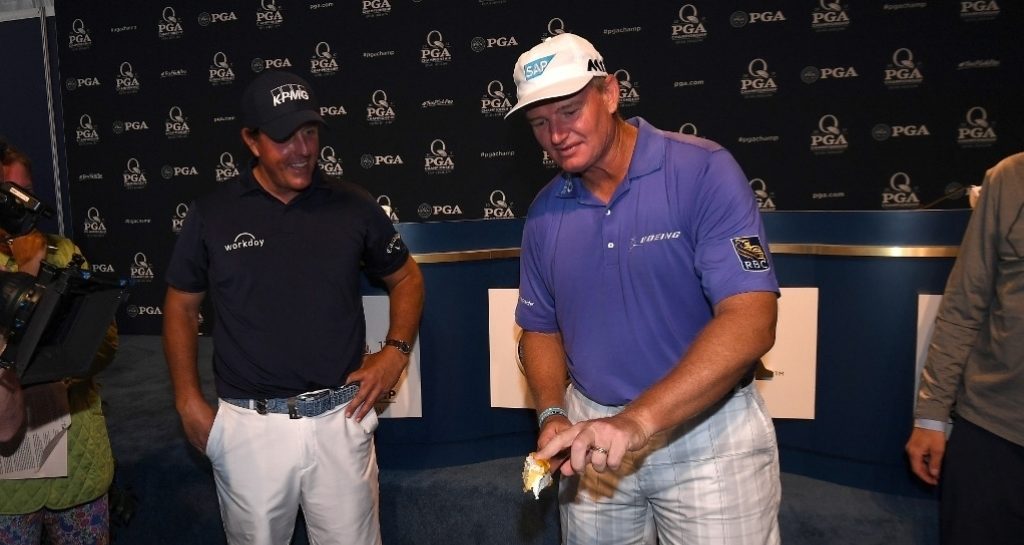 Veterans Phil Mickelson and Ernie Els will tee off at their 100th major at the PGA Championship this week.

The 47-year-olds have amassed nine major championship titles between them in almost three decades of playing golf professionally. And like true gentleman of the game, they had much praise for each other, over some cake of course.

"It just goes by so fast…you don't think about it," Mickelson said before praising the South African for his Els for Autism Foundation.

"It has been a lot of fun. I know we both want to win a couple more.

"What he's done for Els for Autism, I think that's the legacy he's leaving where he's changing the lives and impacting a lot of lives that go through autism.

"As a player, obviously he's got the sweetest, smoothest, most beautiful, aesthetically pleasing golf swing you could ever imagine. It was a pleasure to watch. It was tough to emulate."

This week Phil Mickelson and Ernie Els will play in their 100th major championship! Only 12 other golf legends have achieved this feat. pic.twitter.com/rulZgm62xl

Meanwhile, Els revealed Mickelson reminds him of some of the golfing legends of the past.

"I think it will take a while to kind of sink in for the two of us, but it's pretty cool," quipped the four-time major winner.

"Phil reminds me of an Arnold Palmer, a Seve Ballesteros, a bit of Fred Couples, a guy with a lot of talent.

"Some places he hits the ball, people want to see how he gets out of there. And 90 percent of the time, he gets out of there and probably will make a birdie. I think his fighting spirit speaks for itself. He's a pretty good guy and a hell of a golfer."

While 100 majors is impressive, the duo are still well short of record holder Jack Nicklaus, who played in an incredible 164 majors before calling it a day.