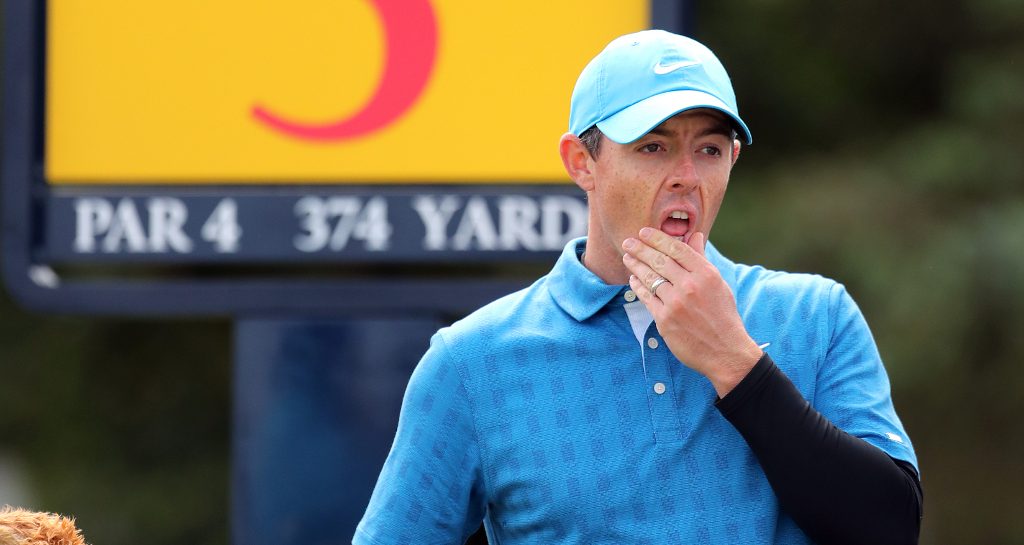 Spare a thought for Rory McIlroy, who could hardly have made a worse start in his bid to capture the Open Championship on home soil.

Expectations were high that the Northern Irishman might be able to pull off a famous victory in front of his home fans at Royal Portrush this week. After all, this is where he had famously broken the course record as a 16-year-old amateur back in 2005.

But he’d barely gotten started when his hopes were dealt a crushing blow.

It took just one shot for things to go terribly awry, as McIlroy hit his opening tee shot at the first out of bounds to the left. In actuality, his ball struck a female fan, connecting with the phone in her pocket and breaking it before rolling out of bounds.

His second attempt stayed in play but sailed left and into the heavy rough where he was forced to take an unplayable lie.

The end result? A disastrous quadruple-bogey 8, which was quickly followed up with another bogey at the par-3 third after his tee shot bounced over the green and he failed to get up and down.

McIlroy showed some fight with birdies at the seventh and ninth to get it back to three over and stayed steady with a string of pars as he headed down the stretch, but there was much more trouble to come as conditions worsened in the afternoon.

At the par-3 16th, an absolutely brutal three-putt resulted in a double-bogey to undo all of his good work, and McIlroy found more trouble off the 18th tee before making a hash of his fourth shot as well, finding the deep rough right of the green to make a triple-bogey seven.

#Rory out here putting like me on the weekends #McILROY #TheOpen pic.twitter.com/7WH788YSbr

McIlroy finally departed the course having shot an eight-over-par 79 – the worst opening round of his major career – and it means his five-year wait for a fifth major title looks certain to continue, after another year of disappointing performances in golf’s big four.

“I would like to punch myself,” McIlroy said after his round. “I made a couple of stupid mistakes. I was pretty nervous on the first tee and hit a bad shot. I showed some resilience in the middle of the round and was trying to fight back into the championship but then I finished off poorly as well.

“But seven over par combined on the first and last holes makes it very hard for you.

“At the end of the day I play golf to fulfil my ambitions not anyone else’s but I wish I could have given the crowd something to cheer about,” he added.