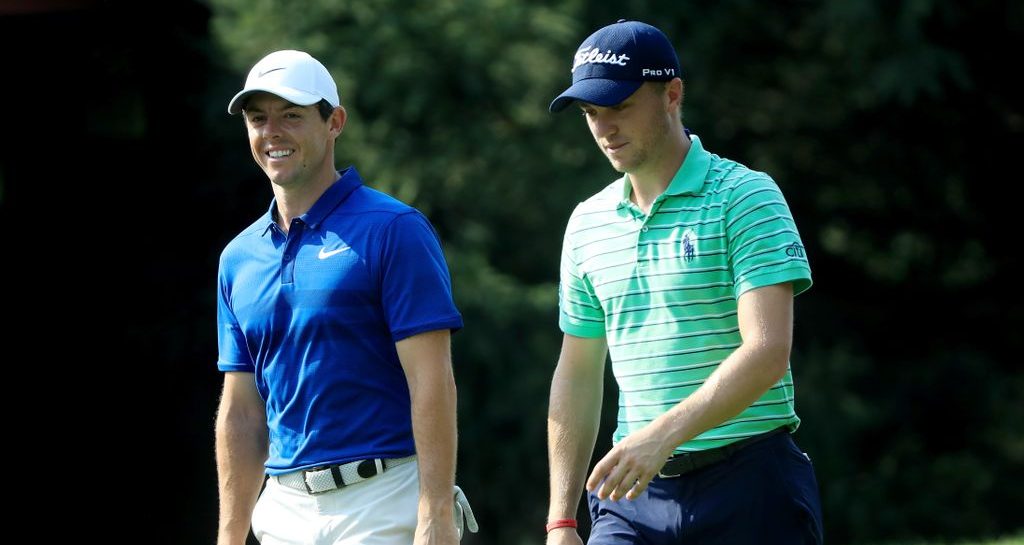 Rory McIlroy thinks he might need to develop a nasty streak like Justin Thomas if he wants to end his four-year wait for another major win.

McIlroy and defending champion Thomas have been grouped with Tiger Woods for the first two rounds of the PGA Championship at Bellerive this week.

McIlroy also played alongside Thomas in the final group of the WGC-Bridgestone Invitational over the weekend, and looked on as the American took a three-shot lead into the final round.

In the final round, McIlroy had to settle for a disappointing 73 while Thomas took the title courtesy of a solid 69.

The 25-year-old showed some killer instinct when it mattered, and McIlroy admits that he could take a page from Thomas’ book when it comes to his attitude on the course.

“I like JT’s attitude over everything else,” said McIlroy, who lives near Thomas in Florida and often practices with him.

“He’s got a nasty streak in him, which I think you need out here. He has that. When he gets himself in the hunt, you can see like a little twinkle in his eye and he really enjoys it.”

Prior to his win at Firestone last week, Thomas had been struggling to replicate the kind of form that saw him win six times in 2017.

So on the Tuesday prior to the start of Bridgestone he called a crisis meeting with his caddie Jimmy Johnson and his father and swing coach Mike.

“We sat down and just said, what are we doing wrong? What can we do better?” said Thomas Snr.

“He initiated it, he said this is what he wanted to do. I told him, ‘That’s really mature of you. When I was 25 years old, I wouldn’t have done that.’”

Reflecting on his own performance at Firestone, McIlroy said it was a mixed bag.

“It was a very strange Sunday,” he said. “I think for me it was good, because I definitely didn’t have my best stuff that week and I still had a chance to win. So that was a positive, knowing that even if I don’t feel like I’m swinging it my best or I don’t have everything quite under control, I can still find a way to give myself a chance.”

McIlroy considered heading out to Bellerive early to check out the PGA Championship course, but the former two-time winner decided to stick to his usual routine.

“I was in Florida last week, I contemplated going over to Bellerive for a day and checking it out, but I told myself I’ve never done it before for a PGA and I’ve won it a couple times and I played well, so why would I change what I’ve always done?” he said.

“I don’t need to change my game, I don’t need to try and, manufacture different shots. I think just I can go with what I have and know if I do that well, I’m going to have a good chance. I’ve always felt like it’s my most comfortable major, and I think the results back that up.”