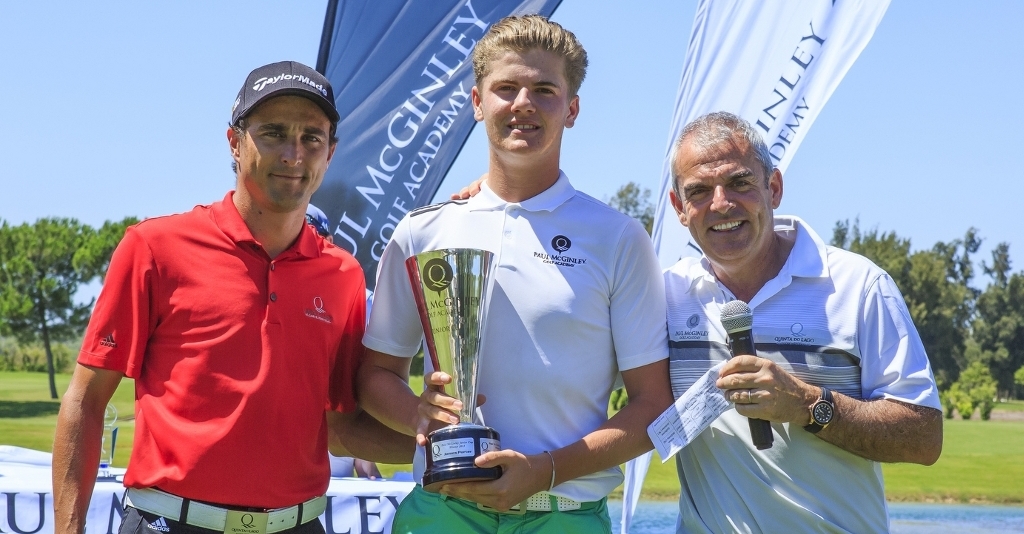 Teenager Alfie Fox will have the exclusive chance to test his golfing skills against the cream of the game’s best up-and-coming junior players after claiming a convincing victory in the 2016 Paul McGinley Junior Cup at Quinta do Lago in Portugal.

Fox, 17, a member at Club de Golf Quinta do Lago and at Roehampton on the outskirts of London, returned rounds of 74 and 73 on Quinta do Lago’s challenging par-72 Laranjal course to finish six strokes clear of Portugal’s Sara Gouveia to win the overall gross title under cloudless skies at the famous family resort in the Algarve.

McGinley was on hand to present the one handicapper with his trophy in person, and not only did Fox have the chance to meet the 2014 European Ryder Cup-winning captain, but his success also earned him a prized place in this year’s Daily Telegraph BMW Junior Golf Championship.

Regarded as one of junior golf’s elite competitions, the prestigious 54-hole junior tournament – which will take place on Quinta do Lago’s acclaimed North Course from October 31 to November 4 – has provided the platform for a host of golf stars including Justin Rose, Matthew Fitzpatrick, Melissa Reid and Carly Booth.

Open to all boys and girls up to the age of 18, this year’s Paul McGinley Junior Cup was played over 36 holes with prizes available in four different handicap categories, and the event attracted another high-class field from all over Europe including McGinley’s own children Killian and Niamh.

The duo produced performances that will have made their famous father proud, with Killian finishing runner-up in the Category One nett competition to Guilherme Jeronimo and Niamh taking the same place in the Category Three nett division behind Beatriz Cavaco.

In Category Two, for juniors with a handicap of to 18, Manuel Martins played well both days off a handicap of 10 to beat his brother David and win the best gross title, with Gustavo Monteiro claiming the top nett score.

Complementing its three championship golf courses – the North Course, South Course and Laranjal – are outstanding practice facilities including Europe’s only Paul McGinley Golf Academy and the only TaylorMade Performance Center in Southern Europe.

The resort’s enviable location by the beach offers the perfect place to relax and unwind with a wide variety of pursuits to enjoy, while a choice of ten exclusive bars and restaurants take advantage of the fresh Mediterranean produce that Quinta do Lago has become famous for.

For more information about Quinta do Lago and its facilities, please phone 351 289 390 700 or visit www.quintadolago.com